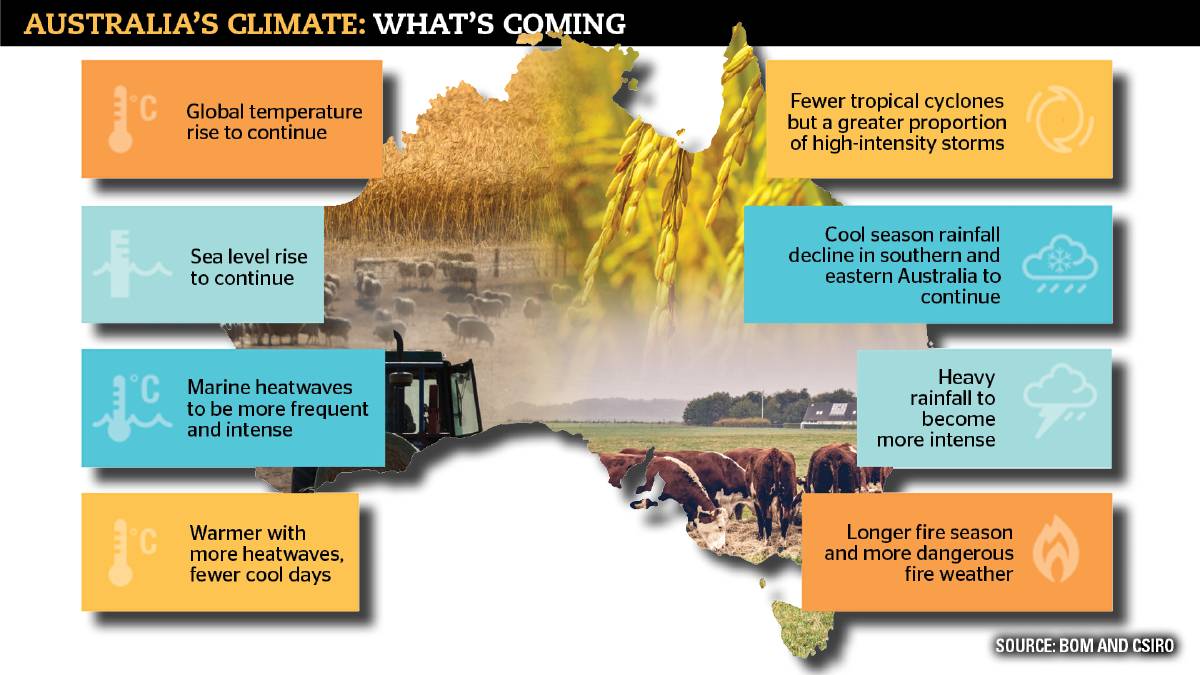 HORRENDOUS bushfire seasons like that of last summer and droughts of the magnitude just experienced won't be one-off events.

Less winter rain in the south and more intense rainfall events in the north are here to stay.

And despite the fact last year was the hottest on record, ten years from now it won't be unusual.

These are some of the key trends detailed in the latest State of the Climate report, released today by the Bureau of Meteorology and the CSIRO.

From an agriculture perspective, one the key messages from scientists now is that much of climate change is locked in so adaptation will be critical to the survival of businesses and sectors.

The report, released every two years, is very clear on the fact Australia will become hotter and dryer due to increasing greenhouse gases like carbon dioxide.

Australia's climate has warmed on average by 1.44 degrees Celsius since 1910. There has been a decline of around 16 per cent in April-to-October rain in the south west since 1970 and 12pc in the south east since the late 1990s. 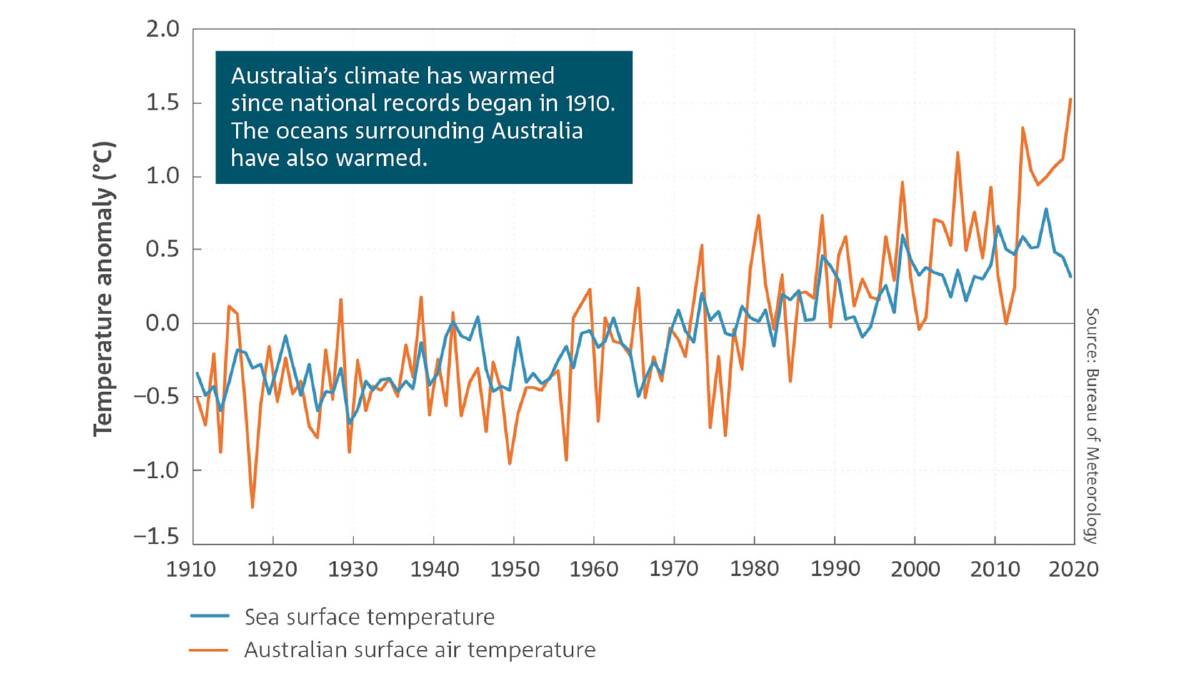 We should treat seasons like last summer as becoming more and more likely, he said.

The rainfall trends during winter in the south also pointed to more time spent in drought in coming decades, he said. 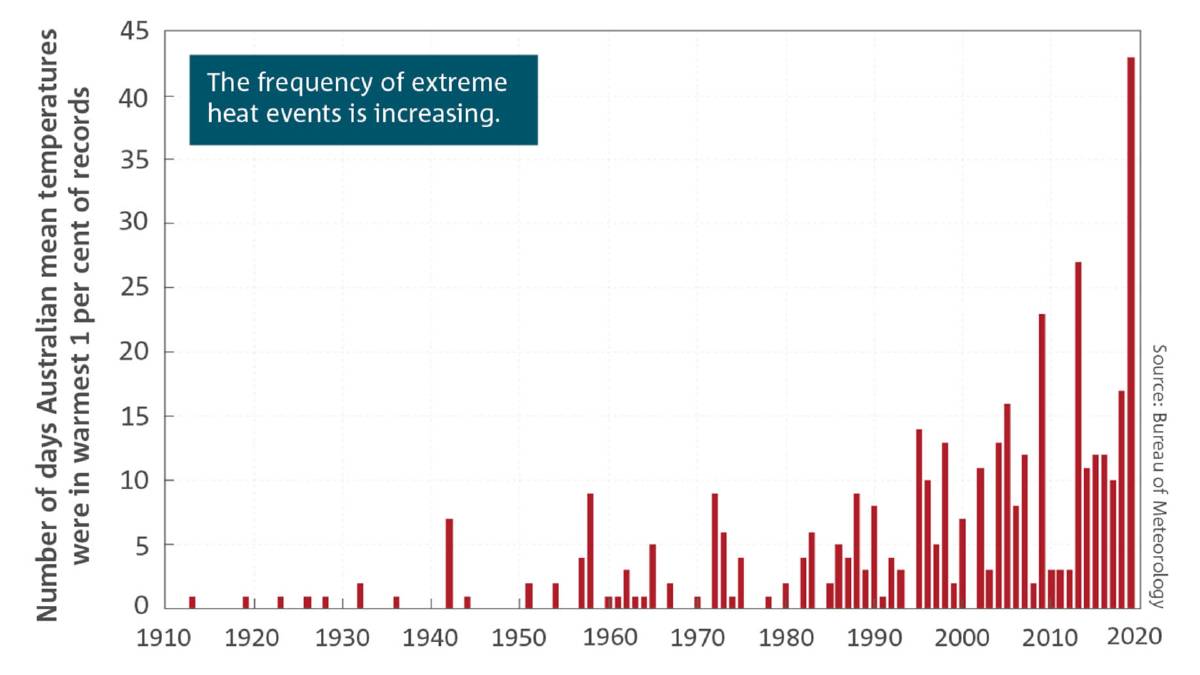 In contrast, rainfall in most of northern Australia has increased since the 1970s.

This summer, Australia's weather will be heavily influenced by La Nina which had now established itself in the Pacific and was typically associated with heavy rainfall and flooding, he said. 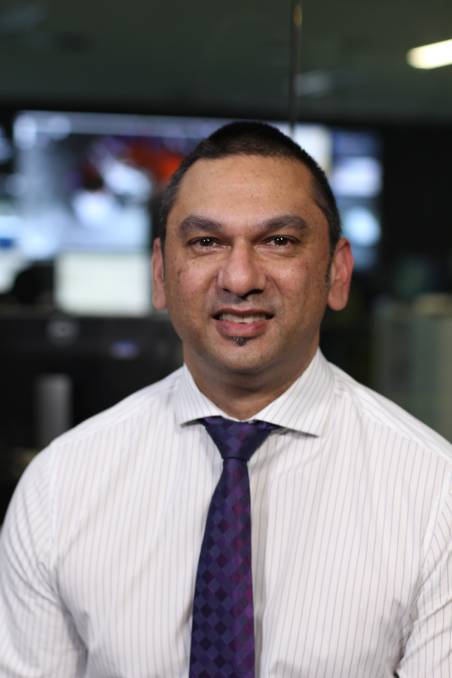 "However, it's currently not tracking to be as severe an event as 2011 but it depends on how much sea surface temperatures warm up around Australia which provide the moisture and fuel," Dr Braganza said.

The oceans around Australia were also being affected by climate change - they are acidifying and have warmed by around one degree since 1910.

Director of CSIRO's Climate Science Centre Dr Jaci Brown said oceans played a big role in the climate change story - in particular changes in the patterns of warming and currents through the ocean affected the rainfall patterns Australia would see in the future.

"Oceans also take up the extra energy stored by the planet as a result of enhanced greenhouse gas concentrations - so they are how we can assess what is happening with global warming," she said.

Sea levels have risen 25cm since 1880. Half of that has happened since the 1970s, according to the report.

Melting ice around Antarctica, Greenland and the glaciers, along with thermal expansion, was the cause. Dr Brown reported global average concentrations of all the major long-lived greenhouse gases continue to rise in the atmosphere with the global annual mean carbon dioxide concentration reaching 410 parts per million in 2019.

Emissions from fossil fuels were the main contributor to the growth in atmospheric carbon dioxide.

No one single entity would solve the problem, Dr Brown said.

It would be a combined effort from governments, industries and individuals.

"In terms of mitigation, we are putting a lot of effort into science and technology to look at smart ways to reduce our dependence on fossil fuels and to capture and store carbon," she said.

"But a lot of climate change is now locked in so adaption is a very big part of what we need to do.

"Australian farmers, for example, are coming up with clever ways to manage and adapt. There is a lot of (scientific) work happening with the ag sector looking at new types of crops and new ways to work."

"The effects of these are widespread, impacting food production, supply chains, regional communities and consumer prices," he said.

"Our farmers are resilient and capable, but climate change exposes them to significant risks. At CSIRO, we are working on technologies and building system wide capability to support Australian farmers in navigating climate risks, while at the same time helping mitigate agriculture's contribution to climate change, and even capture opportunities in a greenhouse gas constrained economy."

The slowdown of carbon dioxide emissions from the closure of businesses and months of people staying home on account of COVID-19 was indistinguishable from the background variability, scientists say.

"We did see a slowing of global emissions in 2020 but sadly, there was still an increase in the amount going into the atmosphere," the CSIRO's Dr Jaci Brown said.

She likened the situation to eating junk food for 10 years and then going on a diet for a day.

"You wouldn't jump on the scales expecting to drop a dress size," she said.

"It's not that simple. This is long-term change and the big challenge for our grandchildren will how to flatten that curve."