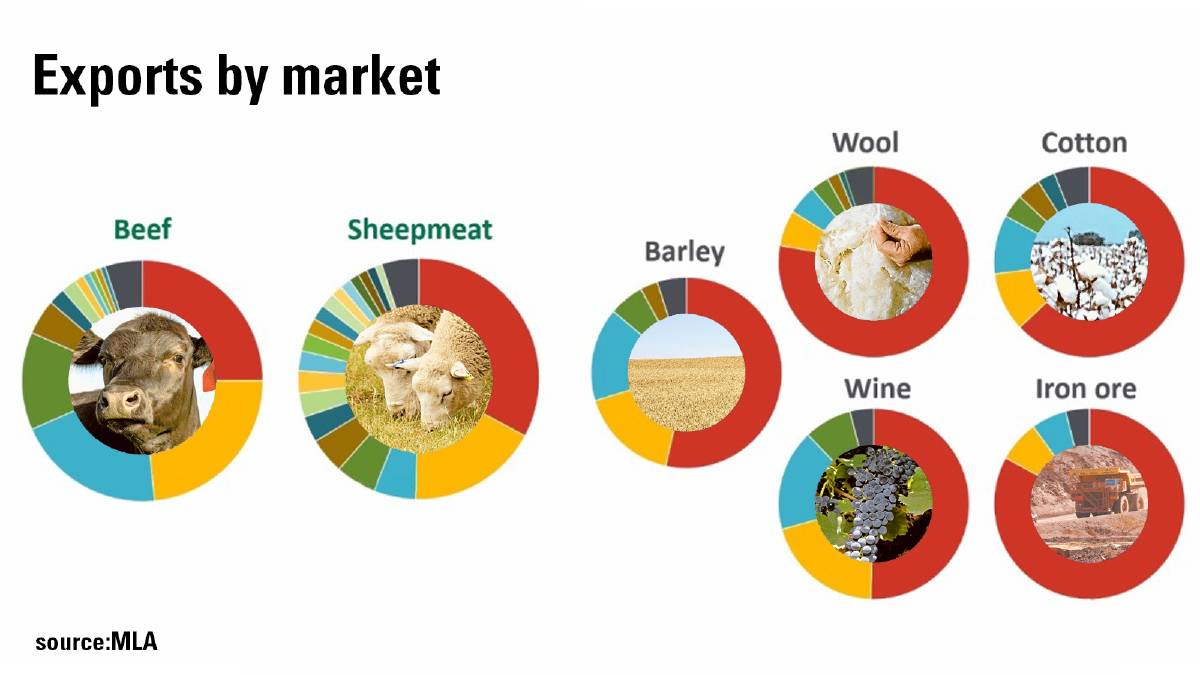 PLENTY OF COLOUR: Australian beef and sheepmeat relies far less on China, represented by red, than other commodities, according to Meat & Livestock Australia data.

RED meat is a standout Australian agriculture commodity in terms of market resilience.

The beef and sheepmeat sectors have a far more colourful array of options for sending product overseas than other commodities like wool and wine - and an absence of reliance on any one single market.

Compared to other major red meat exporting nations, Australia also has a built-in diversity providing a solid risk barrier, particularly given the strength of its domestic market.

And in terms of commercial customers, beef and lamb has a finger in every pie such that no one customer, be it a hamburger chain giant or a supermarket, has the power to dictate conditions.

This comforting story emerged from data presented in a Meat & Livestock Australia webinar last week, one of a series being held under a theme of resilience in the lead-up to the big research and development organisation's annual general meeting later this month.

ALSO FROM THE WEBINARS:Breeding values add up to the right choice, more often

MLA's general manager of international markets Andrew Cox, based in Singapore, said it was competition between end users for beef and lamb that drove meat and livestock prices, so from a resilience perspective it was how the sectors shaped up in terms of competition that counted.

The end users - retailers, foodservice operators and consumers - were the 'money at the top of the funnel', he said.

With 12 destinations accounting for 95 per cent of Australia's beef exports and the top three - the United States, Japan and China - all very close in size, plus a swag of smaller markets, the beef wagon wheel is very colourful.

Sheepmeat even more so: It has 19 destinations that account for 95pc of its exports. China may be the largest but there are plenty more options.

In comparison, commodities like wool, wine and cotton are far more reliant on a single market - China - and have far few colours to their wheel.

"One of the great benefits for red meat is we've grown and diversified over decades and today have less reliance on single markets," Mr Cox said.

Equally, Australia's major beef exporting nation competitors have a strong reliance on their domestic market which Mr Cox said opened them to risk - political and economic.

For example, Argentina's government put an export tax on their beef in an attempt to reduce the prices at home, he said. 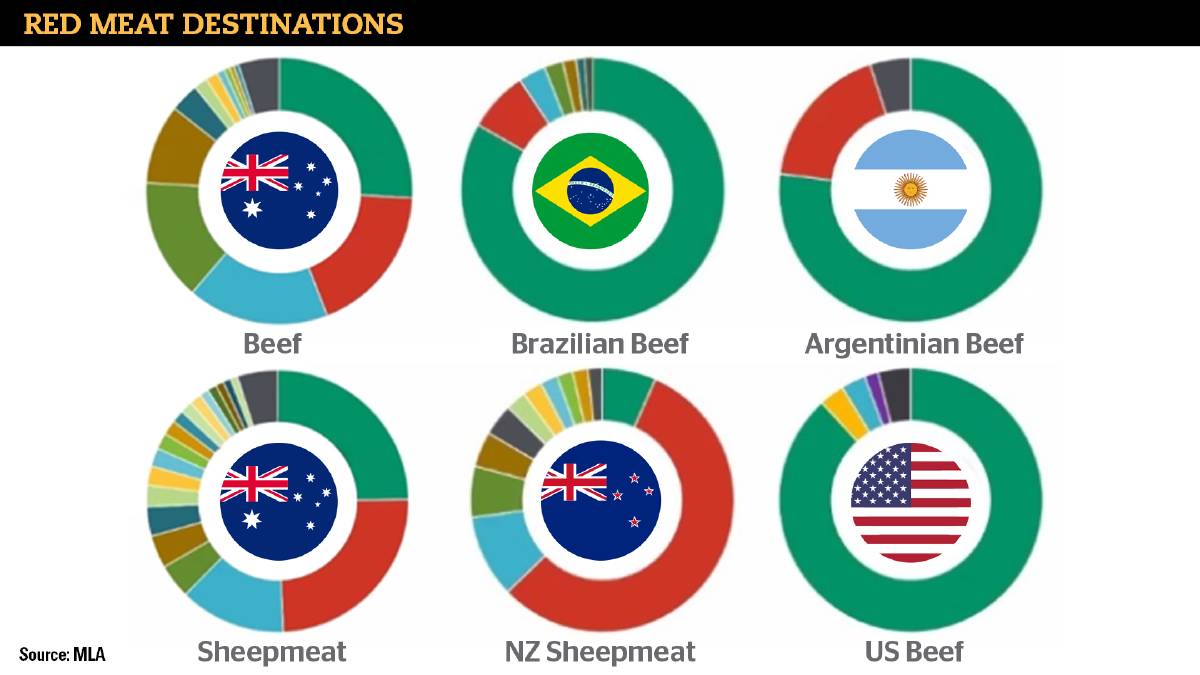 But export markets for these nations were also far less diversified than Australia's, with Argentina and Brazil heavily reliant on China.

"Under a classic definition of resilience, we look good.

"And when you look at commercial customers that also holds true. Sure we send a lot of Australian beef and lamb to large supermarket chains in Australia and places like Japan and we send a lot of product in the form of trim to large hamburger chains but no one customer has the ability to dictate to our industry and we have incredible risk diversification."

What does future resilience look like on the marketing side?

Mr Cox said there were four things to look out for.

Understanding consumers and what competing proteins like pork and chicken were doing was the first.

Secondly, monitoring trade dynamics and continually advocating, as and industry, for free and fair trade.

Factoring in the economy was third.

"Even before COVID-19, economic growth globally was slowing down but COVID brought whole sectors to a halt," Mr Cox said.

"That means customers who are exposed to events, hospitality and tourism are struggling but also consumers globally have less money in their pockets and are worried about their financial security.

"We know we're not the cheapest product and where people are looking to save pennies they may drop imported beef, so we need to continually demonstrate the equity we have in our brand and why we are worth paying more for."

He said resilience in supply was also of vital importance to international markets because overseas customers wanted consistency.