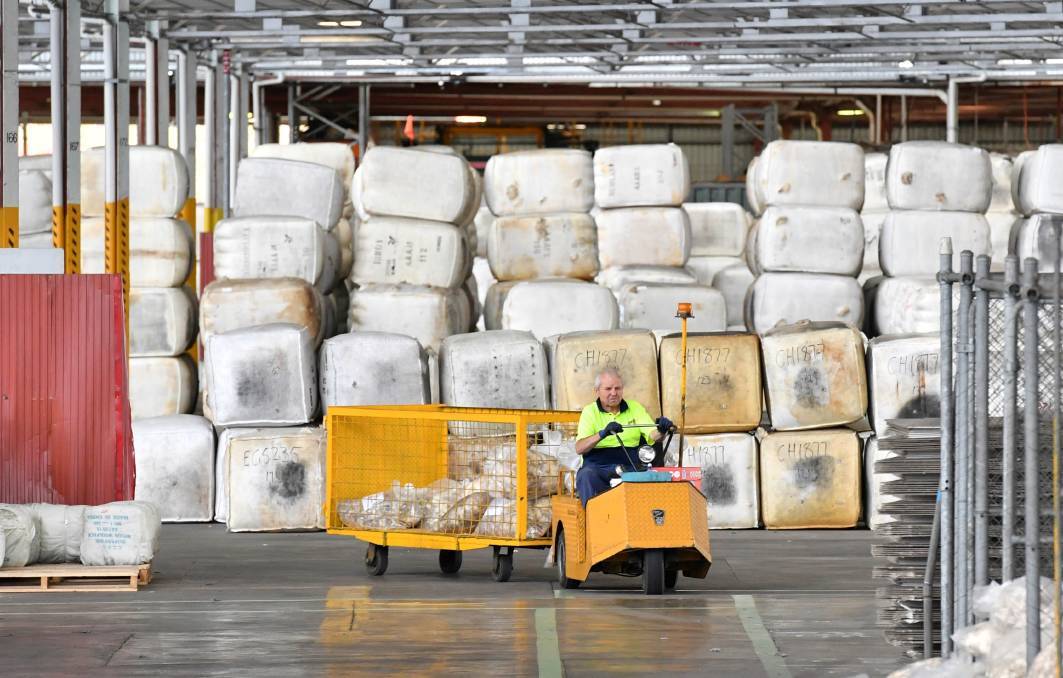 Volatility in Australia's wool market has hit its highest point for a quarter of a century, but grower-held stocks are holding relatively steady.

Just when everyone thought there was a clear, predictable pattern emerging for wool prices - down one week, up the next - the market has mixed it up by going down one day, and then up again the next.

The first day of selling last week resulted in the market contracting - as expected - by 30-odd cents a kilogram.

But then, on the very next day, it put all of that loss that back on and finished the week virtually unchanged.

Thanks to a stronger Australian Dollar, prices were 18c/kg dearer in 'Trump money' (US Dollars) and 9c/kg up in Euro - but ended the week with an overall change in local currency of 1c/kg.

Volatility in the wool market is now at the highest point experienced during the past 25 years and causing consternation for everyone involved.

It is often said that traders need some volatility in order to trade, as the market is so competitive and small that margins for greasy wool exporters really do not exist in a flat market.

So, in order to make a few cents, most exporters must take a punt on the market moving one way or the other.

But when volatility is such, the wins or losses rarely hit the bottom-line and get lost in all the mad scramble to keep the ship on an even keel and moving forward.

Those further along the chain despair at the price movements, which - for those trying to watch carefully and decide when to buy their raw material - just gives procurement managers stomach ulcers.

So, more and more clients towards the pointy end of the chain have another reason to sit back and wait - as if COVID-19 wasn't a big enough deterrent already.

Demand from retailers and wholesalers continues to be very lacklustre outside of China.

This is at a time when topmakers, spinners, knitters and weavers would typically be in constant discussion mode about the coming season and planning how to squeeze the new orders into the production schedule for the next six months.

China continues to roll-along, almost as if COVID-19 is a distant memory.

Although, it does still get the odd outbreak - which is squashed with total lockdown of the affected area and widespread testing of millions of people if necessary.

There is no doubt China will become the biggest market, or economy, in many measures this year as the US and European regions remain constrained by the second or third wave of the coronavirus.

China is currently the export destination for 83 per cent of Australia's greasy wool - up almost 10 per cent from last year - but the domestic season there is nearing an end.

Most of the greasy wool heading to China now will still be looking for a home when it arrives.

With the Chinese 'Singles Day' event having been run and won, the country's retail fraternity is now looking to Black Friday on November 27 as a last spurt of demand before conditions wind-down again.

Hopefully the weather will turn cold, because current temperatures across China are not exactly conducive to selling winter clothing.

There are still the usual Chinese government uniform orders working their way through the system and these are consuming a lot of wool, simply given the sheer scale involved.

But the bulk of these orders are now 'in work', meaning the greasy wool has already been purchased and mostly processed into yarn or fabric.

So, what will drive the wool market for the next five weeks until the Christmas and New Year recess and we can finally bid farewell to 2020?

Despite the lack of activity from the European market, no doubt there is plenty of design work still going on from home offices across Europe.

Given the Italians cannot frequent cafés, coffee bars or restaurants late into the evening, they will no doubt be working at home and still creating next year's collections.

Providing that one or more of the COVID-19 vaccines currently in the pipeline gets approved - and works - people can emerge from their burrows, get a jab and hit the ground running in 2021.

The banking guru's in Australia are starting to get excited about the potential strength of the recovery here given that they can see the size of the cash reserves people have accumulated during the past six months.

Given that they are going to pay you zero, or less, to leave it with them, they expect the population will go forth and spend as soon as confidence allows.

Assuming this is a world-wide trend, we may just see a flurry of retail recovery when a vaccine is available.

There will no doubt be the naysayers who think vaccines won't work, will cost too much, cannot be distributed fast enough or that the sky is falling-in.

But so many people around the globe will just be so happy to have the chance to get out-and-about again - just ask a Melburnian.

The next five weeks in the wool market will probably continue to be just as volatile as the past three months, and as soon as growers push too much wool into the market it will go down.

As they withdraw or pass it in, the market will squeeze-up again and prices will rise.

In the lead-up to the annual industry holiday recess, there will be the usual stock-building activity from the trade to cover the break.

Then those in the trade will be closely watching the guys in the white coats to see progress of COVID-19 vaccine trials.

No doubt the handover in the White House will provide some interesting times as well.

The demand side of the equation has battled manfully to keep things moving in the past couple of months.

Wool is now back to a reasonable price and not too expensive for processors or consumers, yet growers can make a living at this level as well.

The supply side will hold the reigns to a large degree for the next month or two.

If the weekly offering pushes above 40,000 bales, we can expect to see tension build and prices come under pressure.

The grower stockpile is currently not building, with recent reports suggesting a total figure in store of 230,000 bales - which is similar to levels of a few months ago.

No doubt shearing is behind schedule, with wet weather and the shortage of shearers.

But keeping that weekly offering in tune with demand is the biggest challenge the industry faces in the short-term.

The story Volatility in the market frustrates trade downstream first appeared on The Land.