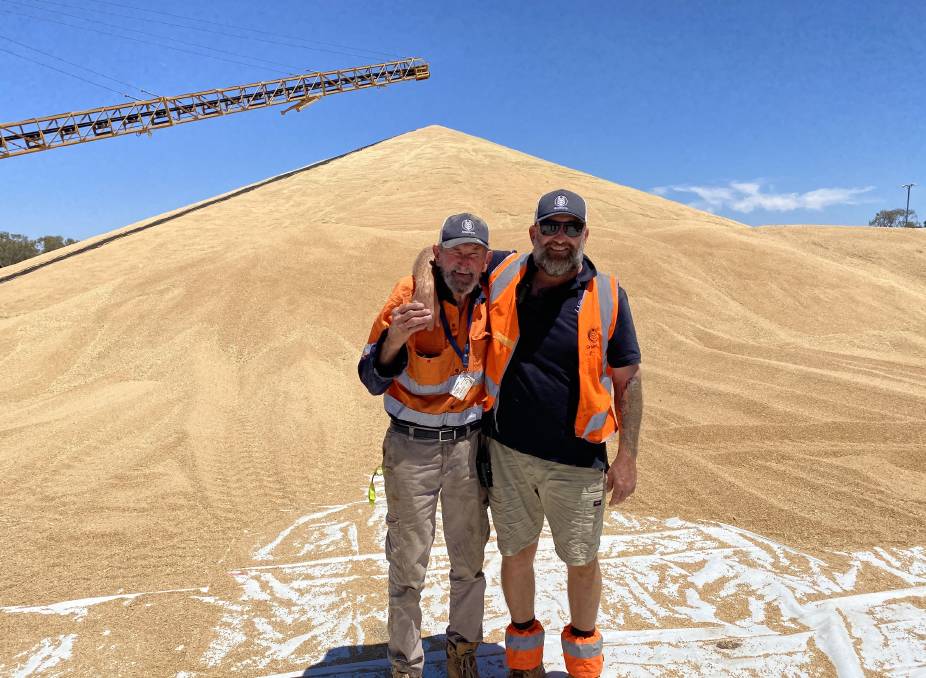 Donnie Krug has turned 80 but he is still fronting up at GrainCorp's Walgett site, saying he does not want to miss out on the big harvest.

AT AN age where many of his contemporaries are enjoying well-earned day time naps after a tough game of bowls, Donnie Krug is busier than ever.

Mr Krug, based in northern NSW, turned 80 on November 15, but there was little time for celebrations as he put his shoulder to the wheel helping to get NSW's monster grain crop off working for GrainCorp.

He is busy at the Walgett site, where farmers are in the midst of their biggest harvest since the record 2016-17 crop.

Mr Krug is lending a hand to his son Nathan, the Walgett site manager.

The bulk handling game is far different from when he started with GrainCorp's predecessor, the Grain Elevators Board (GEB) way back in 1974, a year before Australia got colour TV.

The Warialda native, who has also worked as a builder, miner and farmer has worked with the company on and off for 45 years.

Mr Krug knows the northern NSW wheatbelt like the back of his hand, having spent time at GrainCorp's sites at Walgett, Moree, Croppa Creek and Boggabilla along with a lengthy stint as a team leader between Inverell, Moree and Boggabilla - known as NSW's Golden Triangle.

A jack of all trades, Mr Krug worked in Papua New Guinea in the early 1970's building roads, and, in 1973, worked at Mount Isa in the mines.

After a lifetime of work and just shy of 80, Mr Krug re-joined GrainCorp at the start of this harvest at Walgett.

And with such a bumper crop to move, it is far from a quiet step into semi-retirement.

Mr Krug is kept busy driving machinery, rebuilding bulldozers, constructing sheds, sweeping grain up onto the bunkers and helping with other operations and general maintenance works.

He said he relished the chance to be part of such a ripper season.

"This is one of the biggest harvests I have seen since the '80s, so I was not going to miss it," Mr Krug said.

"It's an exciting time for many people in our area and I didn't want just to sit around and watch," he said.

"I love working; it keeps my brain and body going. When you get older, you need to keep things working."

Nathan Krug has also worked with GrainCorp for over 20 years, meaning there's around 70 years' harvest experience between father and son.

Nathan says his father's support during this year's harvest has been invaluable to all.

"It's not very often that you get the privilege to work with your Dad for this long - it's overwhelming and I'm extremely proud of him being out here.

"Dad provides fantastic mentoring opportunities to the young workers on site. In turn, they look up to him and look out for him.

"Nothing can keep him away from working - he just loves it!"

After several years of drought, there is a massive buzz at GrainCorp's Walgett site.

Last week alone the site received more than 230,000 tonnes and is on track to reach record numbers by the end of the season.