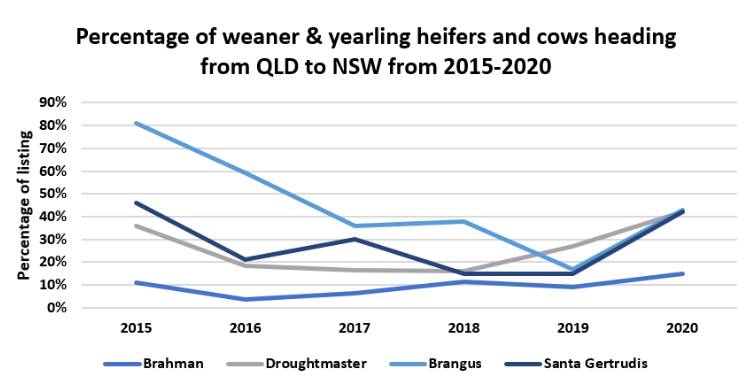 SOUTHWARD: The percentage of weaner and yearling heifers and cows going from Queensland to NSW. Source AuctionsPlus

The excellent growing season across much of the Eastern States has seen the heifer market hit unprecedented highs.

The record prices have been the combination of fierce competition from producers looking for lighter stock to capitalize on bulging feed supplies and the desire to rebuild herds. Additionally, the favourable seasonal outlook for 2021 has seen many producers look towards heifers as the more cost efficient option to rebuild herd numbers, albeit slower, compared to the more expensive option of cows, pregnancy tested in calf, or cows with calves-at foot.

The AuctionsPlus Market Insights team has reviewed the growth of the heifer market and prices throughout 2020, with a major surge in heifer lines being offered through the online selling platform in Queensland.

Extremely high young cattle prices has reportedly enticed some cattle producers in Central and Northern Queensland and the Northern Territory to sell heifers earlier than normal in an attempt to capitalise on the robust demand, as opposed to growing them out to heavier weights.

In the midst of unprecedented demand for quality young cattle, it has become evident that various northern vendors who rarely sell young cattle early, except in times of drought, are attracted to the historically high prices in the robust cattle market.

Agent Mitch Braithwaite, from Elders in Charters Towers, Queensland, said that his region "still hadn't had a significant rain event and feed is patchy, so many clients who usually grow cattle out are taking a punt on the big prices for lighter cattle", with many lines being snapped up by buyers in southern Queensland, New South Wales and even Victoria.

Of the Queensland cattle offered through AuctionsPlus in 2020, 61pc of all weaner heifers and 54pc of all cows with calves-at-foot have been sold to buyers from NSW, compared to 25pc and 13pc respectively, in 2019.

The strong north-to-south flow of cattle, especially including breeds such as Brahman, Droughtmaster, Brangus and Santa Gertrudis, indicates the sheer determination of many NSW beef producers to restock for both weight gain and breeding purposes.

Mitch Braithwaite suggests that "many buyers are working to a budget in dollars per head, rather than cents per kilogram, and lighter heifers can cost anywhere between $600-$1000 plus a head, so they can fit more head of lighter heifers into a budget".

Weaner heifer prices have skyrocketed throughout 2020. With the traditional margin between weaner steers and heifers significantly reduced, the desire for potential future breeding stock has accentuated the already tight supplies.

With 330-400kg heifers so far in November averaging 453c/kg, 60pc above the same period last year, many producers are being forced to look far beyond their regular buying regions for suitable lines.

However, Mitch Braithwaite believes that "a big rain event will slow the market very quickly ... on top of that, it is now exceeding 40 degrees on most days so mustering cattle will slow down in coming weeks due to the heat", which will result in subsequent decreases in QLD and northern offerings.