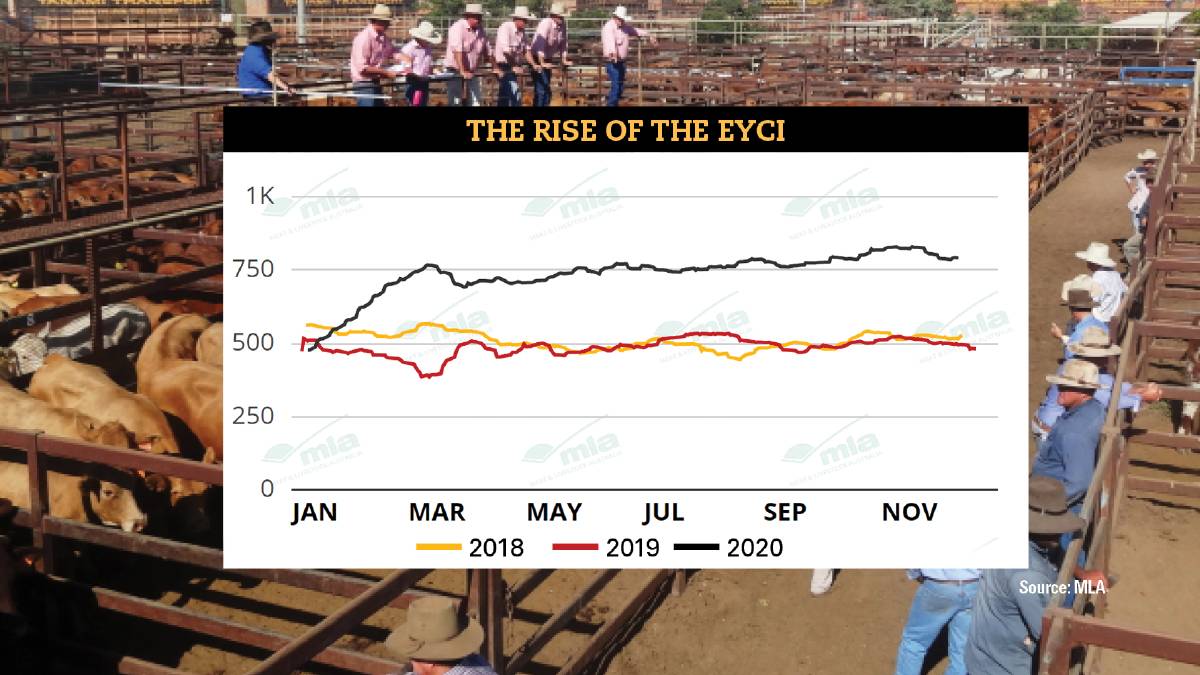 The phenomenal story of the 2020 cattle market.

SUPPLY moving in one direction; demand in the other.

When the Eastern Young Cattle Indicator opened in January at 486.75 cents per kilogram carcase weight, restocker activity was sporadic.

Analysts were touting the EYCI could reach 800c if big rain arrived but no one around the rails could picture it at that stage.

The rain-induced rally had started by the last day of January, with the EYCI at 525c and it jumped day-by-day until it hit the 700c mark.

Agents said for what was perhaps the first time ever, producers appeared to be driven more by a form of uncertainty not related to the weather.

It wasn't quite panic selling but there was a definite desire to cash in immediately to mitigate potential risk of reduced buyer competition or logistic hurdles.

The market did a sharp u-turn.

"However, the initial impact of COVID-19 on finished cattle prices in March and April, where prices for heavy steers declined 87c in four weeks, proved to be short-lived," Meat & Livestock Australia chair Alan Beckett explained in his annual general meeting address.

"Cattle prices continued to break records through winter - an indication of the strong season in southern cattle-producing regions and firm export and domestic demand.

"Increased restocker and export demand, combined with a dwindling supply pool, has led to prices remaining historically high across both store and finished categories in the second half of the year so far."

Indeed, restockers with grass fever were fervent. By May, analysts were declaring Australia now had the most expensive feeder steers in the world.

With the EYCI put on hold due to movement restrictions, MLA was reporting feeder steers at 363 cents a kilogram liveweight.

All categories continued to climb as low supply tightened its grip.

Come late June, the EYCI was in the late 700c, with MLA analysts reporting that equated to more than 200c above the five-year average.

By the end of September, the EYCI had set a new record at least half a dozen times, including four times in the one week, and was barreling towards the 800c mark on the back of so much understocked country and ripper seasonal forecasts.

Mr Beckett: "Record finished cattle prices, a reduced national herd and the abundance of feed and water availability have been the main factors driving producers to buy young cattle and cows and rebuild herd numbers in recent months.

"The contrast in seasonal conditions between the drier Queensland and Western Australia, and the wetter NSW and Victoria, has propped up prices."

Indeed, all year cattle have continued to come out of the woodwork, enticed by red hot prices, surpassing expectations of what was available.

The peak was reached in late November when the EYCI hit 829c but by now the pace of the herd rebuild was heavily dependent on northern rain, with the much-discussed La Nina still to deliver in very dry regions of Queensland and WA.

On the back of that, the last few weeks of the year saw the EYCI start to decline but analysts were still talking record weaner prices come January - sizzling in fact if La Nina finally kicks into gear over Queensland.

During some of the fast-rising periods for the EYCI this year, market analyst Matt Dalgleish pointed out it would have to move past a whopping 938c/kg to set a record in real prices.

Plenty of analysts and agents believe the young cattle market still has some upward momentum to go but it's unlikely any would go as far as saying it will make that mark.