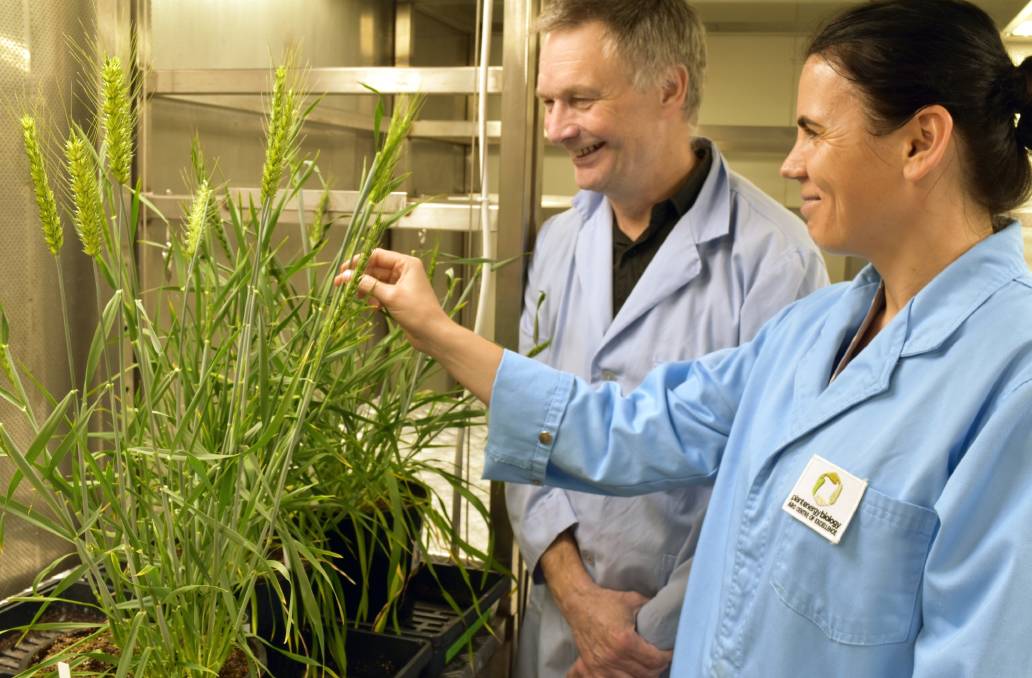 Ian Small and Joanna Melonek from UWA's ARC Centre of Excellence in Plant Energy Biology and the School of Molecular Sciences contributed to the study through their globally recognised expertise in a family of genes known as Restorer-of-fertility-like (Rfl).

THE genomes of 16 wheat varieties that represent breeding programs from around the world have been sequenced and analysed as part of a landmark study conducted by an international team of scientists, including researchers from The University of Western Australia (UWA).

Wheat, one of the world's most cultivated crops, requires its production to be increased by more than 50 per cent by 2050 in order to meet the estimated global demand.

The research provides the most comprehensive atlas of wheat genome sequences reported to date and the study will aid global crop breeding considerably by helping to improve crop yield, quality and pest resistance in wheat and other important crop plants.

The results of the study were published in Nature, a weekly international journal, by the University of Saskatchewan and involved an international effort by more than 90 scientists from universities and institutes in Australia, Canada, Switzerland, Germany, Japan, the United Kingdom, Saudi Arabia, Mexico, Israel, and the United States.

Ian Small and Joanna Melonek, from UWA's ARC Centre of Excellence in Plant Energy Biology and the School of Molecular Sciences, contributed to the study through their globally recognised expertise in a family of genes known as Restorer-of-fertility-like (Rfl).

These genes have valuable applications in wheat hybrid breeding programs.

"Wheat hybrids account for a fraction of wheat plants grown globally, despite the promise of higher yields and better tolerance of diseases and environmental challenges," professor Small said.

"The lack of fertility control systems that would be practical and affordable on an industrial scale is a major limitation in the development of hybrid varieties for self-pollinating crops like wheat."

The researchers analysed the Rfl sequence information across the wheat genomes and found surprisingly high diversity across varieties that is directly relevant to hybrid breeding programs.

Dr Melonek said the analysis of the Rfl gene family as a source of fertility-restorer genes would be important to accelerate hybrid-breeding programs, which, if successful, would increase the production of wheat significantly.

"We knew from the first complete wheat genome reference published two years ago in Science that wheat had a remarkably high number of Rfl genes, but this new work exposes the high variation among the family members between different wheat varieties," Dr Melonek said.

"Wheat is a staple food and any improvements we can make to increase its productivity and quality will be important as the world population quickly grows and food security becomes an increasing issue."

Professor Small and Dr Melonek believe that the findings are transferable to other plants and offer a significant route to help improve crop yield and quality in the future.

Scientific groups across the global wheat community are expected to use the new resource to identify genes linked to in-demand traits, which will accelerate breeding efficiency.

Sponsored by
After more than a decade of research and refining, a new effective, humane and targeted feral pig bait is on the market.
Test
Tasmania has softened its border restrictions in relation to Brisbane and Sydney.
Test
FAR Australia is delighted to announce a well known plant scientist has been appointed to its role as research director.
Test
NSW Irrigators lead push for more regional voices in water decision-making.
Test
Slaughter figures start 2021 under seasonal average, confirming tight supply of stock.
Test
A blast of extreme heat with tropical conditions to follow has authorities in several states issuing alerts.
Test
In the last in our IDW flashbacks, we take a look at the interbreed judging at last year's event.
Test
The federal Health Minister would not say if the government was talking to Pfizer about buying more vaccine doses.
Test