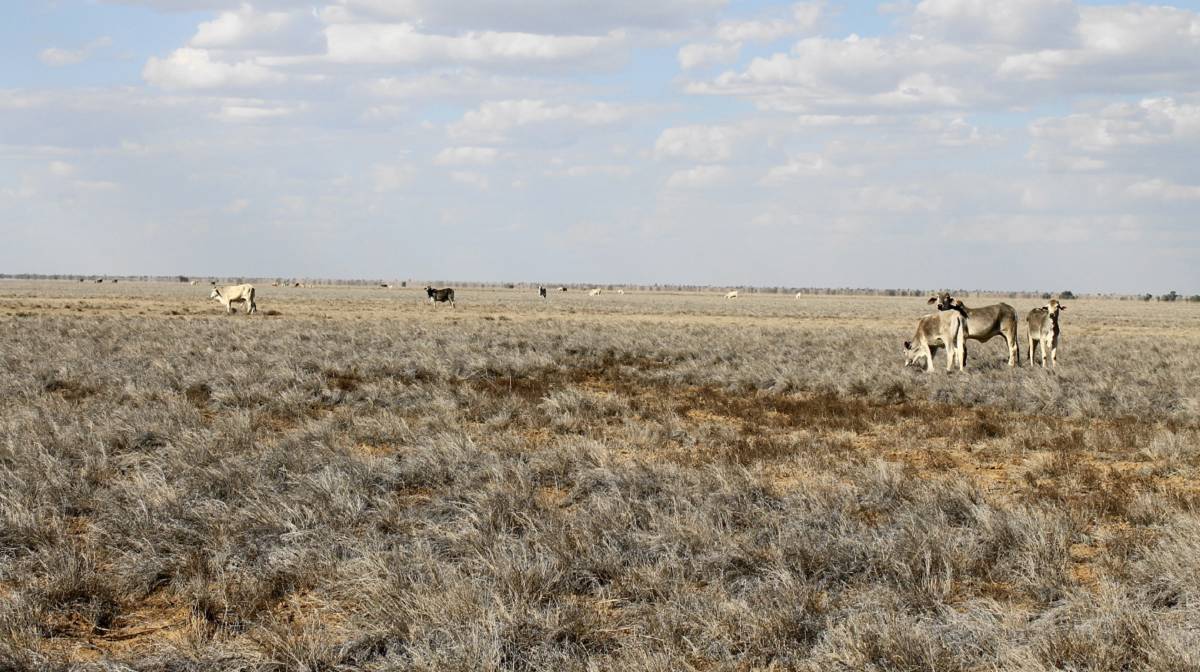 PARCHED: In Queensland's central west, country is starting to look as bad as it did in 2014-15 when things were at their worst at the height of the drought.

With cattle and sheep prices so high, it is easy to forget that area such as central west Queensland are in drought, writes Ken Wilcock.

OUT around Winton in Queensland's central west, country is starting to look as bad as it did in 2014-15 when things were at their worst at the height of the drought that followed the 2010-12 La Nina years.

That is how agent Tom Brodie summed it up when I spoke with him last week.

In the past six to eight weeks there have been a series of around nine little falls which added up to 34mm but the biggest was a mere 8.5mm, doing more harm than good.

Tom said there wasn't a lot of feed but what there was on the ground all looks pretty black everywhere you drive now.

Three to four days of strong winds made the country look worse still.

But the reason we are not hearing much about the seasonal circumstances in places such as Winton is that all attention is focused on the extraordinary cattle and sheep prices.

It has never been so easy to sell stock or for that matter find agistment in the south where despite some drying off, country is still remarkably good.

Back then Tom reminded me they were getting just 160c/kg for little weaners and 80c for cows.

Today's prices at three-to-four times higher are why there are big yardings at Roma and other centres and few people are choosing to feed.

In 2013-15 there was a lot of feeding and that prompted recent enquiry from carriers to bring hay up from the south.

Some it seems could not believe there was little demand for it and chose to come up on spec but ended up sitting at truck stops while they rang around trying to shift it.

For the moment, cattle and sheep are in pretty good order and the weather forecasts and indicators are all good but as Tom points out, it does not have to rain and while the expectation is that it will happen, they don't want to still be waiting at the end of January.

With November usually a dry month and normally no real expectation of anything until mid-December, eyes are nevertheless drawn to the north for any tell-tale signs of a build-up.

But the big thunderheads that brew up 200-300km north of Richmond and Hughenden and to the north-west are yet to appear, while only a hint of humidity registers in the daily 40-plus degree heat.

Back in October with a few storms floating around and some decent falls south of Longreach and in patches to the west of Winton, the mood was less urgent and even inclined toward buying a few cattle, but since then the attitude has changed.

Now it is more a case of better sell something before getting caught in the two-to-three week lull period over Christmas when it is harder to shift anything.

While that sentiment is rapidly filling kill slots prior to Christmas and has led to grid and saleyard rates for meatworks cattle coming off, Tom is confident that the depth of southern demand for store cattle will prevent any significant drop in price in that segment of the market.

The reason we are not hearing much about the seasonal circumstances in places such as Winton is that all attention is focused on the extraordinary cattle and sheep prices. It has never been so easy to sell stock or for that matter find agistment in the south where despite some drying off, country is still remarkably good.

Having cattle and sheep down in the Lightning Ridge, Walgett, Coonamble area, Tom has seen first-hand the extent of wheat and barley stubble paddocks whose owners want to buy cattle now that their grain harvest money is as good as in the bank.

"It (the market) won't dip back a lot with those fellows ready to step in and buy," he said.

WITH only a fortnight to go before processing effectively ceases for the Christmas break, saleyard prices for export types continue to fall as demand for slaughter cattle dwindles.

That brings heavyweights down to a dressed-weight equivalent of 570-590c/kg aligning them with southern/central Queensland grid rates adjusted a little over a week ago.

Similar types at Wagga on Monday were 18-26c cheaper with only a couple of head reaching 300c.

That equates to 550c DW or a little better.

While that brings them more into line with published southern grid rates it also shows for effectively the first time in the latter part of 2020 an opening up of the usual negative spread between southern and northern rates.

To the extent of published grids in the south there appears to have been a negative spread with northern equivalents for some time but the reality has been that southern saleyard markets have been well ahead of the limited number of grid quotes.

The point this year is the lateness of the spread opening up.

Usually it begins around October/November allowing northern operators to supplement their kills with cattle from the south.

Southern buyers usually return the favour in the earlier part of the year when the spread is reversed.

Since last week's adjustments there has been little or no change to grid rates.

The majors are still quoting 660c for a 4-tooth ox and 590c for heavy cow in southern and central Qld.

Published grids for Wingham, Wagga and Naracoorte have the same descriptions at 615c and 560-580.

On the international scene there is only limited commentary this week due to trading activity in the US being interrupted by Thanksgiving holidays.

A rising incidence of COVID-19 remains the focus in the domestic market and increasing restriction on indoor dining in many areas throughout the country is contributing to extreme uncertainty in demand outlook.

Inspections have reportedly been stepped up after port workers tested positive for COVID-19.