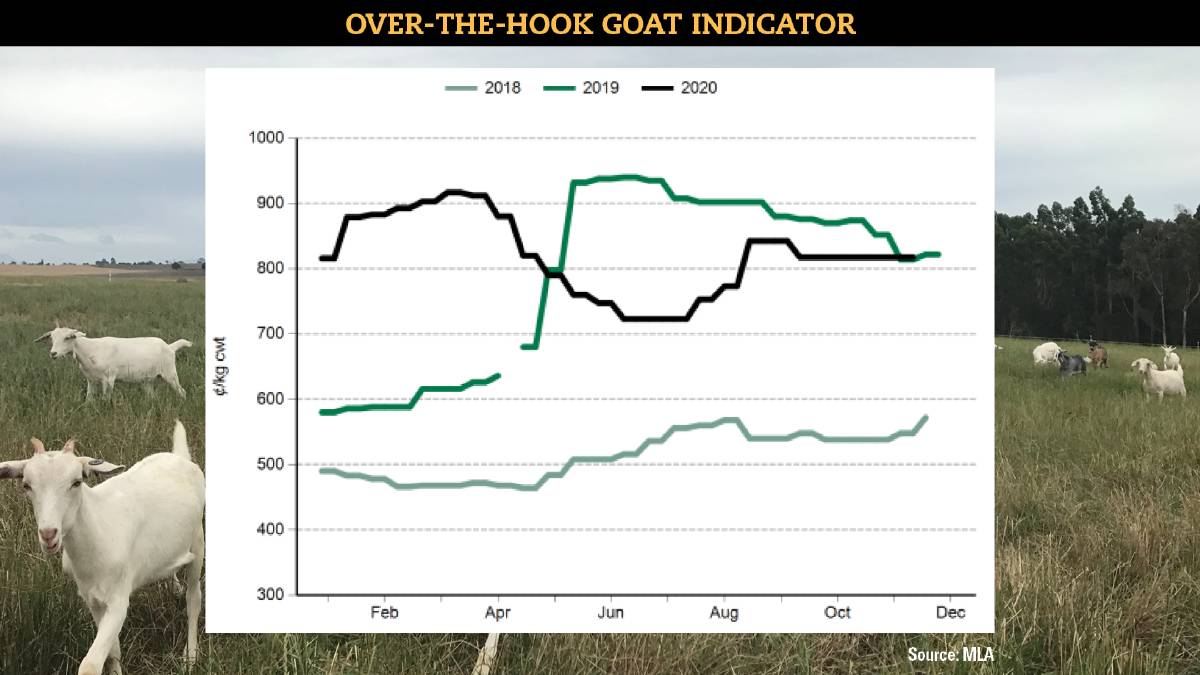 BIGGER numbers of goats sent to market in recent weeks has done little to dent the stability that has been the market story for this species for the past few months.

All categories of over-the-hooks goat prices as reported by Meat & Livestock Australia topped at 920 cents per kilogram carcase weight and averaged 8.18c at the end of last week. That is on par with the market this time last year, not all that far from the 940c record the goat over-the-hooks indicator set in the middle of last year and a significant jump on the bottom of just over 700c it recorded in June when the full effects of the pandemic were felt.

Numbers slaughtered have been up across all eastern states except NSW, with agents saying that is in line with normal seasonal activity but exacerbated by the dry biting hard in Queensland.

For the last week in November, MLA figures show Queensland's slaughter was 9108, compared to 5377 for the same week last year. South Australia's goat slaughter almost doubled on the week before but was down slightly on year-ago levels and Victoria's jumped week-on-week by 4700 head.

After the autumn price dip brought on by foodservice shutdowns in the United States, which takes more than 70 per cent of Australia's goatmeat exports, the market started to climb, flat lining from around mid August.

Exporters were able to shift product into alternative markets, including Korea, Taiwan and Japan and are now reporting US demand has strengthened.

"We always look to keep new friends close and the result of this year has been expanded markets," Campbell McPhee, Western Meat Exporters, said.

"Low supply buffered the market a good deal from the worst of the pandemic predicament. If you're going to have a COVID year, it's best to have it while restocking is going on."

Goat Industry Council president John Falkenhagen said while goat prices had not been record-breaking this year, as was the case with other species, they were still historically strong.

"The restocker market online has been particularly hot for females and some specific males for breeding," he said.

"As the goat industry continues to mature, the bucks will be sought after even more."

He said there was an element of building goats into a livestock enterprise as restocking took place.

"A lot more producers are certainly giving goats a second look," he said.

Forecast modelling from Thomas Elder Markets shows an annual average price above 800c is likely for the 2021 season.

MLA chair Alan Beckett said slaughter and production of goatmeat had tracked below year-ago levels for most of 2020 on the back of drought-driven destocking over the past couple of years in key supply regions.

That tight 2020 supply was largely what kept prices historically high, as the impacts of COVID-19, such as decreased demand and disruptions in airfreight, kicked in.

"Exports have been tracking lower year-on-year in 2020, mostly as a result of the decrease in available supply," Mr Beckett reported.

For the year-to-September, goatmeat exports had declined 40 per cent from 2019 levels, with the US remaining the largest destination for Australian goatmeat, despite shipments being almost halved from 2019 levels.

"As one of the world's largest exporters of goatmeat, Australia's reliance on the strength of overseas markets is critical," Mr Beckett said.

ALSO READ:Australia's great migration of cattle from west to east