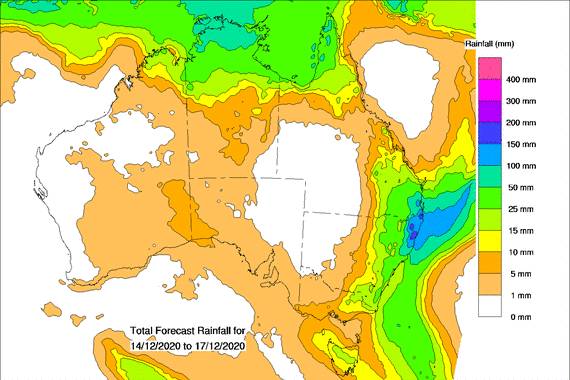 There is further heavy rain in store for northern and eastern Australia. Source: BOM.

The La Nina event had failed to get the summer wet season started in the tropics until it got help from the Madden Julian Oscillation.

NORTHERN Australia has been drenched with falls of over 200mm in parts of Western Australia, Queensland and NSW as the summer wet season kicks off in earnest, sparked by the onset of the Madden Julian Oscillation (MJO) over our tropics.

Cygnet Bay, in the Kimberley, received 400mm and Broome 200mm with flood warnings on the De Grey and Fortescue rivers after rain last week.

Over the weekend the focus switched to northern NSW and south-east Queensland, with Murwillumbah, in far northern NSW, receiving 225mm in one 24 hour period and Fairlie's Knob, near Maryborough, Queensland, tallying 191mm.

There have been further sporadic falls, with widespread cumulative tallies in excess of 200mm from the mid-north NSW coast right through to Bundaberg.

Rain has been much less intense over key agricultural zones, with Toowoomba totalling 40mm for the month, Dalby 35 and St George just 8mm.

But the heavy falls may mark a shift in weather patterns and see the expected wet summer kick off in earnest.

Bureau of Meteorology meteorologist Greg Browning said the La Nina phenomenon, consistent with heavier than average rainfall over much of Australia, had been assisted by the MJO to help provide favourable conditions for heavy rain.

"Besides the primary seasonal climate driver - La Nina - the MJO has been the main shorter-term climate driver influencing the current increase in rainfall across parts of northern Australia and indirectly southern Queensland and northern NSW," Mr Browning said.

"Last week, the MJO contributed to the development of a monsoon trough off Australia's northwest," he said.

"The trough was the site of the formation of the tropical lows which formed near the WA coast, moved ashore and generated significant rainfall."

He said the MJO also contributed to the heavy east coast rainfall by allowing tropical moisture to feed into the region.

"As a result, the weather systems which developed near Queensland and NSW in recent days (an upper-level trough, and a surface trough and low-pressure system) could tap into this tropical moisture and generate widespread heavy rain over parts of the east coast," he said.

And while it was a long wait for the first significant rain of the summer, those in the north looking for more will not have to wait long, although it is still unlikely to create much precipitation over the Murray Darling Basin.

Another monsoon trough is expected to redevelop and lead to further monsoonal weather across northern Australia in the coming days.

The BOM's latest eight-day rainfall outlook suggests the rain will mainly be confined to northern parts and not extend very far inland.

"It typically takes a combination of monsoonal conditions in the north, along with deep weather systems extending from the mid-latitudes into the sub-tropics, to tap into the tropical moisture in the north and draw rainfall into inland locations," Mr Browning said.

He said those looking for rain inland also needed to watch out for the passage of a tropical low or ex-TC into inland parts.

However, he said this did not look likely in the short-term.