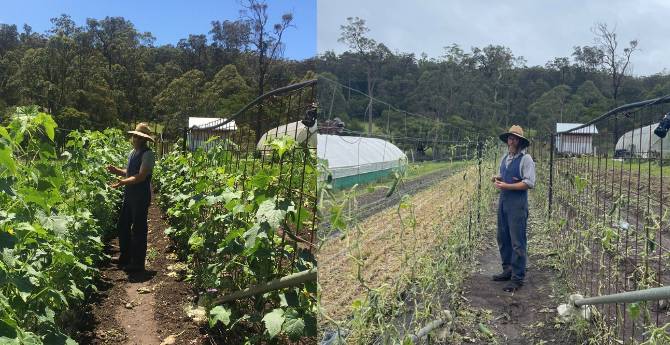 BEFORE AND AFTER: At left, Fraser Bayley of Old Mill Road BioFarm checks out a healthy zucchini crop, one week later the same crop destroyed (pictured at right).

Two market gardeners devastated by the Boxing Day storm that wiped out their farm.

Veggies were thriving during the busiest month have been wiped out by a huge hail storm that hit the NSW South Coast on Boxing Day.

It was not how Mr Bayley hoped to see out the year.

"It is another thing we have to deal with," he said. "There's no good time to have a storm like that, but this is the worst time." 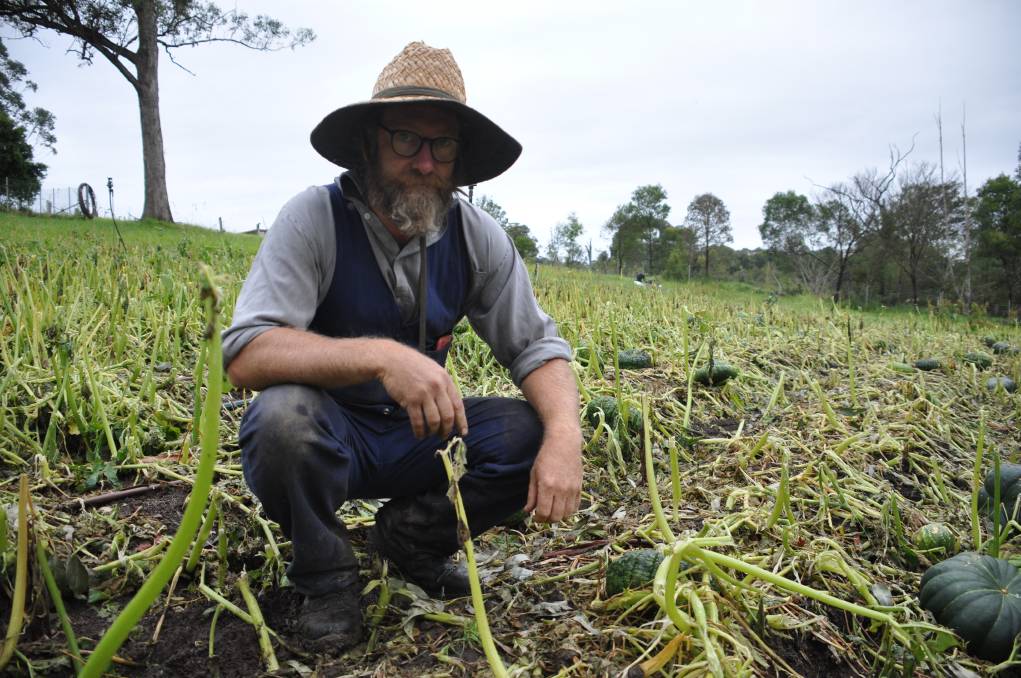 Fraser Bayley of Old Mill Road BioFarm said the Australian Ironbark pumpkin crop had no chance of bouncing back after the Boxing Day storm.

Mr Bayley said 80mm of rain within half an hour combined with huge amounts of hail destroyed his crops just after 6pm.

"There wasn't any warning, just one massive hail stone on the roof and the sky was really dark," he said.

As the storm hit, Mr Bayley and his partner Kirsti Wilkinson managed to move their cars under cover, but their crops outside the poly-tunnels were left to the mercy of the elements.

The pair retreated inside their home, which soon became inundated with water. 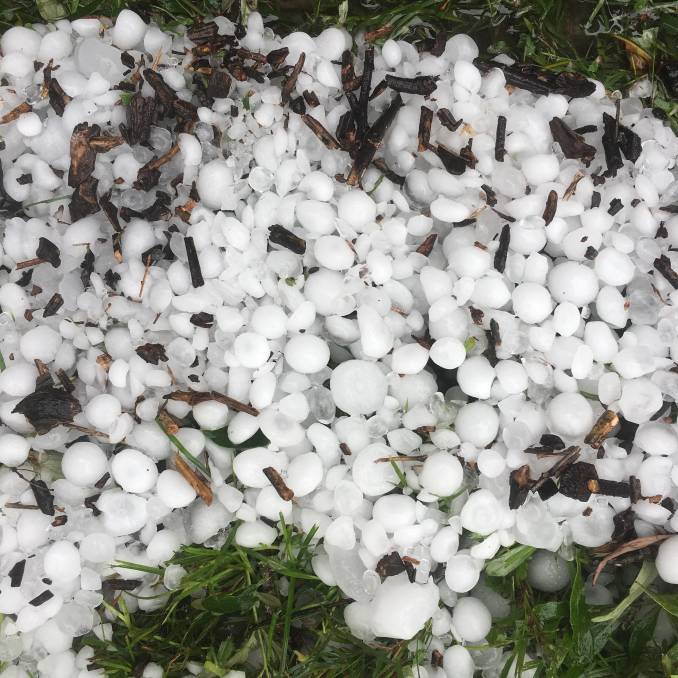 "It's a real old farm shack and the roof is flat; all the hail sat on top and the water banked up and started flooding the house."

Windows smashed, but what's more concerning for the market gardeners was the damage to their livelihood.

"The hail and the water destroyed the veggie patch," Mr Bayley said.

He said their income loss after January's bushfires and now this, was hard to digest - the last cruel card dealt by 2020.

"January is our busiest month, where we take about 20 per cent of our gross income," Mr Bayley said.

He said their high-value produce thrives in the warmer months, ready for the summer holiday demand. 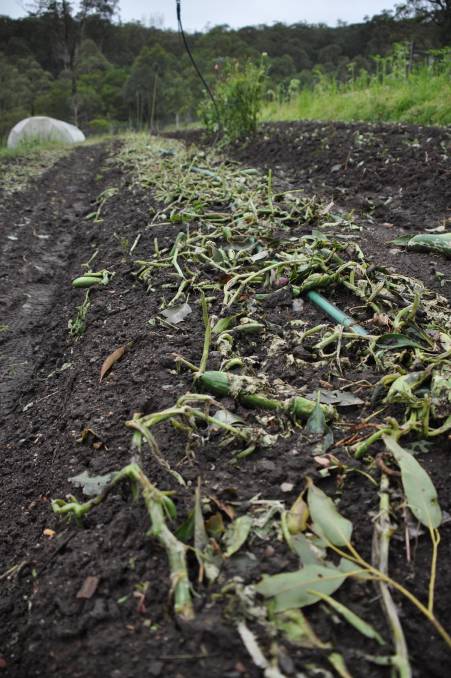 Cucumbers minced to mush after the storm.

Mr Bayley said working through years of drought was a hard slog. Then there was uncertainty of business during the bushfires which burned through state forest only a kilometre away.

"There were burnt leaves falling everywhere and ash damage to the lettuce - it wouldn't wash out," Mr Bayley said. "But the wind saved us here, we were protected."

"During the fires, our wholesales customers didn't have power and the highways were closed - people weren't coming," he said.

He said the business kept afloat thanks to Moruya's SAGE Farmers Market, which continued to operate.

But this January, he said: "we will have nothing to sell at all" - apart from a few tomatoes that grew under cover. 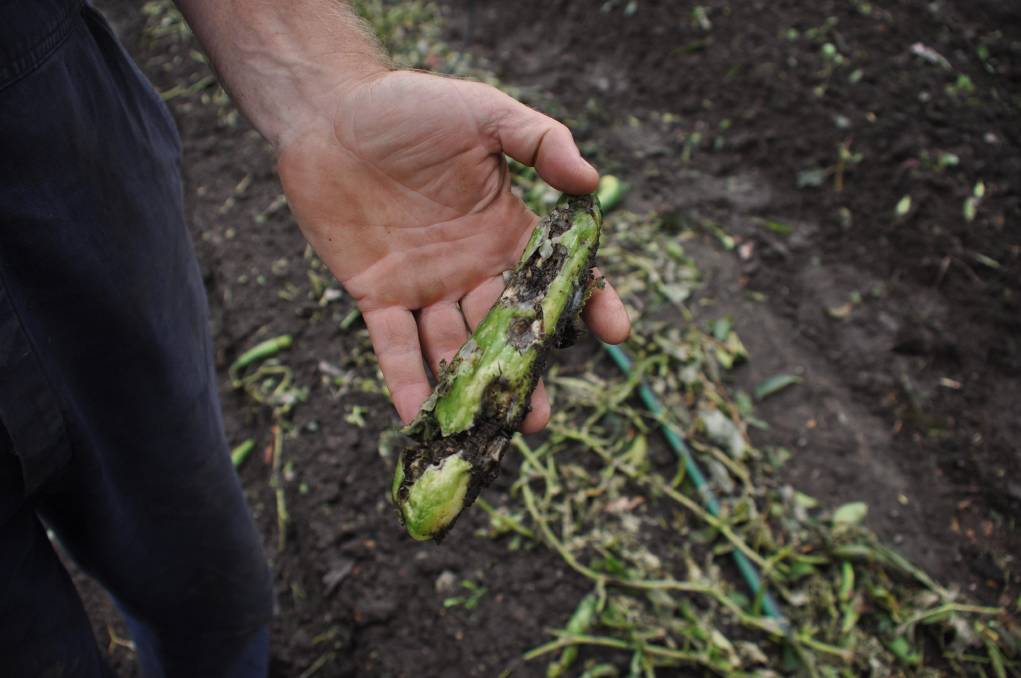 The storm pulverised their remaining acres-worth of veggies into coleslaw.

"There will be some things that may come back, but we aren't certain - it all depends on the weather," he said.

Walking around the farm, Mr Bayley assessed the hail-chipped pumpkins with stems shredded.

Everything that was once leafy and green was now strewn across the muddied ground.

The mission ahead: to clean up, replant and resow.

"The soil is still warm so we'll be able to bounce back reasonably quick - but it still takes time," Mr Bayley said. 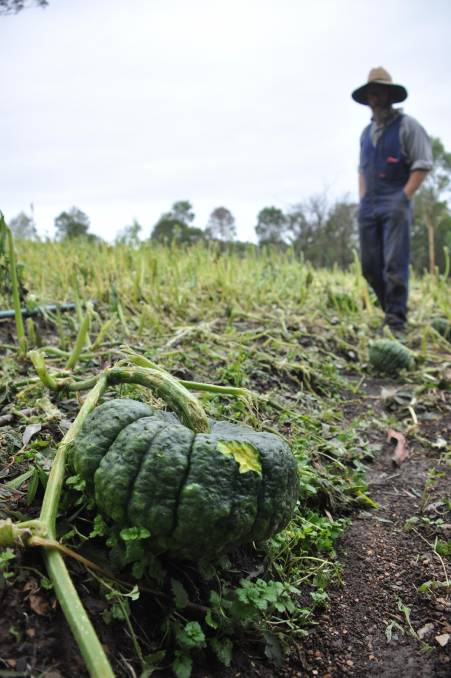 Fraser Bayley in the pumpkin patch pummeled by hail.

"Eight weeks is the shortest time to get something from seed to harvest.

"We are looking at unusual things we can grow quickly."

Old Mill BioFarm grow 58 varieties of vegetables and deliver weekly boxes up and down the NSW South Coast.

Mr Bayley said the coming week's boxes would be limited in variety but hoped the locals who subscribed would understand.

He said other growers in the region would also be going through a challenging time and hoped the coast would be soon graced with "a few sunny days" and no more disastrous events.