This report aims to substantially increase the knowledge of insect pests in South Australia, Victoria, Tasmania and southern NSW.

A new Dairy Australia report has revealed the financial impact of insect pests on dairy pastures in south-east Australia and highlights key areas the industry could focus on moving forward.

The report aimed to substantially increase the knowledge of insect pests in South Australia, Victoria, Tasmania and southern NSW.

On average across all regions, in pasture foliage and on the soil surface, lucerne flea, bird cherry-oat aphids and blue oat mites were consistently the most abundant pests.

Below ground, the most abundant pests varied between regions.

Mealybugs were present in all regions but only relatively abundant in Tasmania and Gippsland.

Root aphids were abundant in Tasmania, south-west Victoria, Gippsland and to a lesser extent NSW and SA, but not found in northern Victoria. 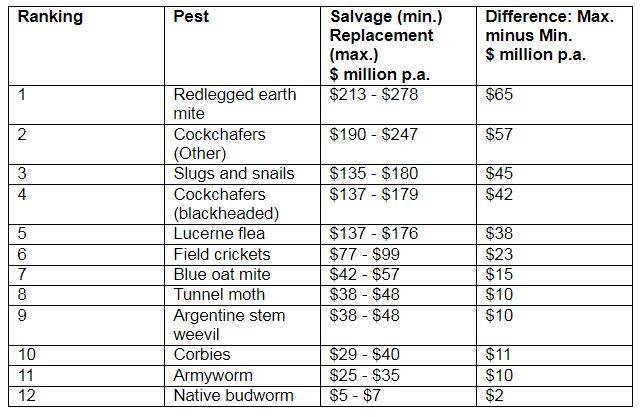 'Other weevils', which is a collection of species that could not be identified to species level, featured in the top three most abundant pests in Tasmania, SA, NSW, south-west Victoria and northern Victoria.

True wireworms were a pest of note in Tasmania, NSW, south-west Victoria, Gippsland and northern Victoria, while small pointed snails were the most abundant pest in SA; their dominance influenced by the extent of calcareous soils in that region.

The cost of DM losses from pasture pests in the dairy industry were estimated and ranked at an aggregate level for six regions: northern Vic, south-west Victoria, Gippsland, Tasmania, SA, and the NSW south coast.

This economic analysis showed the extent of the cost and type of pest varied per region.

Red legged Earth Mites were ranked as the costliest pest across all regions and were particularly abundant in south-west Victoria, Gippsland, northern Victoria and SA (Table 1).

Cockchafers were divided into two groups in the analysis: Blackheaded cockchafers and 'Other cockchafers'.

Other cockchafers were the second most costly pest identified across all regions on average.

Slugs and snails were ranked third costliest pest group in the study across all regions but were not found to be dominant pests in the on-farm survey and were found in low abundance compared to other pest insects.

At a regional level, there were some differences (Table 2). 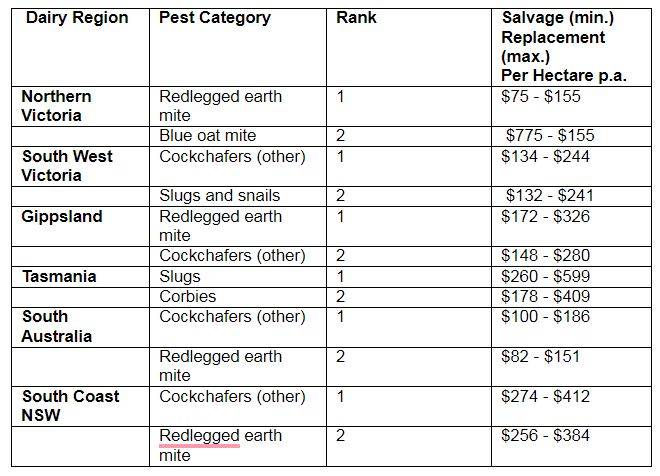 Lucerne flea was found in all regions and ranked fifth in the economic analysis.

The report highlighted three key areas the industry could focus on moving forward to address insect pests including:

Dairy Australia's Ruairi McDonnell said the study was an important one for the industry as there was little previous information available to help understand the economic impact of insect pests for dairy.

In addition to pest species, the research also found a large and diverse array of other insects beneficial to farmers both above and below ground in dairy pastures.

This data shows that careful consideration should be given to those invertebrate populations that can have a positive impact on the farming ecosystem when developing pest management solutions.