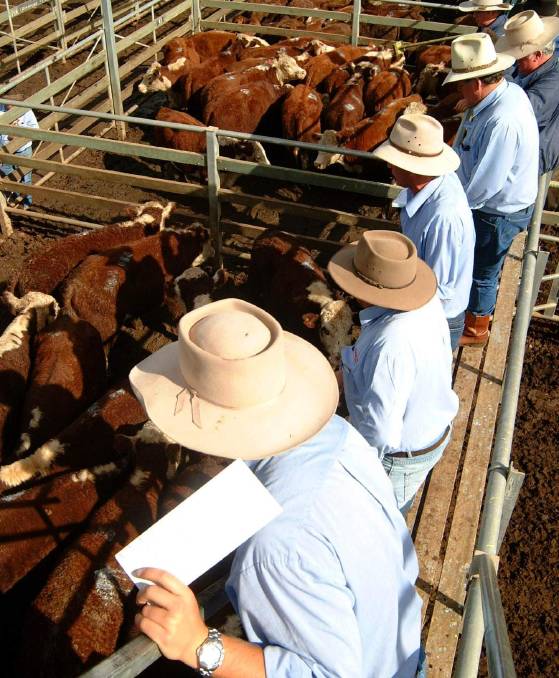 THE rip-roaring launch to 2021 cattle selling in the south is providing fuel for plenty of conversations about unusual trends, unpredicted demand shifts and reforms that could be here to stay.

So too, the wash-up of the big weaner sales has producers with capacity in their paddocks running a swag of scenarios as the spectre of more and more grass versus dwindling opportunity to secure stock looms.

From the push-and-shove for lighter cattle and heifers outselling steers to a closing gap in premiums for black cattle and the role online bidding played in setting a floor in the market, agents, analysts and cow cockies the country over agree there is plenty to dissect.

"It's next level stuff, new territory for everyone," Tamworth agent Patrick Purtle, Purtle and Plevey, said.

There were 60,000 weaners sold across Victoria and southern South Australia and more than $65 million spent but plenty of agents, and buyers, said people still went home empty-handed, or at least a fair bit short of what they'd hoped to get.

"The cattle were good quality but at 480c upwards for heavy calves and as much as 660 for lighter ones, a lot of people were working hard to make the calculator come to the party," Mr Purtle said.

"Profits are getting skinny at those rates but still people who have huge amounts of feed know numbers will be tight in the regular NSW weaner selling season and if it rains more in Queensland, supply there will only tighten.

"A lot is being explored right now - cows, heifers to join, a short term trade in sheep. Big questions evolve out of a huge amount of feed and not much stock."

One question to emerge has been whether the format of such a large number of sales in such a short period serves all.

At times, four of five different venues were going at the one time.

Experienced cattle market man, Elders national livestock manager Peter Homann believes it can be done better and it was time parties came together to address the issue.

"We had so much demand for livestock this year and plenty of competition everywhere but in a more normal year, vendors will want to ensure professional buyers can be in each of the regions," he said.

Chief executive officer of the Australian Livestock and Property Agents Association Peter Baldwin acknowledged that sentiment, but said the beauty of the industry was its agility and options to bring the product to the consumer would be continually developed.

"Agents have always been innovative when it comes to thinking of ways to get stock to buyers and they are rapid and creative thinkers. They will make decisions to source stock elsewhere very quickly if things don't suit them in one situation."

Some suggest the advent of interfacing has already superseded the discussion about sale double-ups.

Operating online, Charlie Hart, Hart Rural Agencies at Barraba, sourced 850 heifers from Victoria's weaner sales this year and said at times he had four sales on the go at the one time.

"I like the idea of it all being in one week. Trucking-wise, the logistics are good for us and freight is such a big component," he said.

His purchases are going to around six operations in the NSW north west slopes and plains to be joined to Wagyu bulls, with the high-marbling component - probably around 50 per cent - retained and the rest offered for sale in-calf.

Those breeders supply first-cross (F1) Wagyu cattle to southern Queensland feedlots and still require more stock so will look to buy out of the paddock as autumn arrives.

Sales could no longer afford not to have an online component, he said.

"It's not what those online bought, it's what they bid on," he said.

Speaking on the latest Elders Livestock Update, market analyst Murray Arnel said in some of the Victorian weaner sales, more than 60 per cent of the heifer offerings were by bought by remote buyers bidding online.

As to where the market would go from here and whether those buying calves at such high rates could be confident of turning a profit, Mr Homann said numbers were really tight and Queensland still probably had not had what could be described as a general break.

"Store prices will be high right through 21. Even if the market drops back 30c liveweight it's still a fantastic price," he said.

Asked if those who haven't started to restock yet have missed the boat, he said: "If you haven't been selling at these high rates, right now I'd wait. A bit of hotter weather and northerly winds always brings more cattle onto the market."