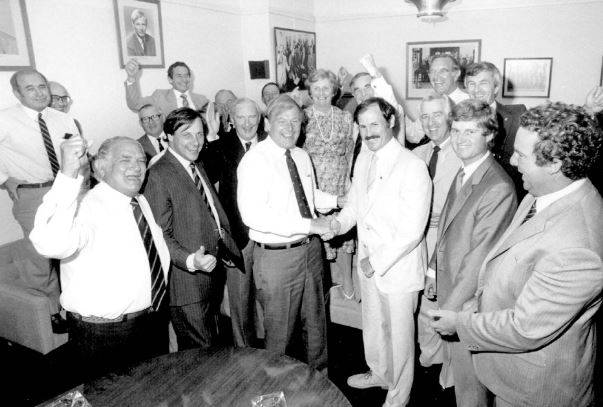 Comment: Former leader of the Nationals in the Senate, Ron Boswell AO reflects on some key moments with the late Doug Anthony.

At the 1974 Queensland state election the National Party had just changed its name from the Country Party.

I asked my friend Bill Lamond to stand for the seat of Wynnum, a workers' suburb on Brisbane's bayside.

Bill was an excellent candidate and the campaign was proceeding well.

Although considered by experts to have no chance, polling showed we were neck and neck with Labor.

We had to throw everything at the seat to win, and Doug Anthony, the federal leader, was called upon to lend a hand.

It was Ladies' Day at the bowls club and the local Labor member turned up.

He was introduced to Doug Anthony and immediately went into a tirade using language you wouldn't hear in the front bar of a pub.

Doug's reply to the crowd of mixed bowlers was, 'You don't need me here, Bill, this member's the best thing you've got going for you. He'll win you this seat.'

Doug went on that afternoon to address a meeting of 600 people on the Wynnum foreshore, a remarkable crowd at that time and setting.

He won over the crowd and contributed a winning momentum to the campaign.

Word of mouth spread about the language of the local Labor member and Doug's intervention was a deciding factor in the Nationals' win by some 39 votes.

In 1983 I walked up the steps of Old Parliament House, a freshly elected Senator.

Peter McGauran and I were the last two parliamentarians to join an Anthony-led National Party which went back to the time of Black Jack McEwen.

Doug was a strong, popular and decisive Leader who understood the power he had within a Coalition, to be wielded only when necessary.

He also understood that the Coalition could deliver for National Party candidates.

After three months of not achieving anything and being a lost soul, I made my first speech in the Senate.

Doug called me in to his office afterwards and gave me the best political advice of my career.

'Ron,' he said, 'You got into the Senate on Flo's petticoat tails by being the gopher boy for the Queensland National Party, but that won't cut anything down here. You will be a one termer unless you understand Canberra and how the system works to assist rural and regional constituents.'

I took his advice on board that day and never forgot it.

They got it in trumps with Doug Anthony.

Whether it was defence of the wool floor price, opposition to increasing the value of the dollar, or his defence of single desk selling, Doug stuck to his intent to deliver for rural Australia.

In 1983 the Labor Party and Liberal Party decided to bring in one-vote, one-value.

This would devastate the National Party seats by making them impossibly large in area.

The Westminster system of Parliament in Great Britain, on which our system is based, allowed for a twenty per cent tolerance of voter numbers in regional seats but here we were, a much more rural country, about to do away with that protection.

Some of our country seats were already over one third of a state in area.

Doug knew that if this proposal succeeded the National Party would be exposed and put under tremendous pressure.

Members would no longer be able to service their huge electorates.

The seat of Kennedy would start at the Gulf of Carpentaria in the north and finish up in Dalby in the south, a totally unworkable situation which would also cost the Coalition seats.

This is where I saw true leadership in Doug Anthony, someone who would really fight hard for what they believed in.

There was all hell to pay when he put this forward.

Every Liberal was against it.

The Labor Party surprisingly shifted and supported this.

The numbers were such that if the National Party crossed the floor and voted with Labor in the Senate, then Doug Anthony's fairer plan would prevail.

This put Doug under tremendous pressure.

There were calls coming in from everywhere.

At that stage he had it in his mind that he was going to retire and he wasn't going to leave the National Party in a worse position, so he held his position against all opposition and won.

I learnt you had to be a strong leader to lead the National Party and he was one.

In late 1983 Doug announced he would retire.

I rang him and begged him to reconsider. I told him that he had a lot more to give politically and that he was a leader who would be missed by all of us in the National Party constituency.

He said to me, 'I've been in Parliament twenty-seven years, it took twelve years to defeat Whitlam and govern with Fraser for three terms. I haven't got the fire in my belly to take the Coalition into government again.'

After twenty-seven years, he had given everything he had.

In 1996, Larry Anthony won Richmond, following his father and grandfather into the seat.

Showing the same potential Larry became a Minister but narrowly lost his seat in 2004 due to a Liberal look alike how to vote card put out by the 'liberals for forests' candidate directing preferences to Labor.

The National Party lost a great politician and future political leader that day.

The Anthony legacy is a yardstick by which to measure all leaders for their strength of purpose and ability to defend the interests of rural and regional Australia.

* Doug Anthony died on December 20, 2020, aged 90. Planning is underway for a memorial service to honour him.