Understanding cow behaviour was the key for these Gippsland farmers in solving a mastitis problem on their farm. 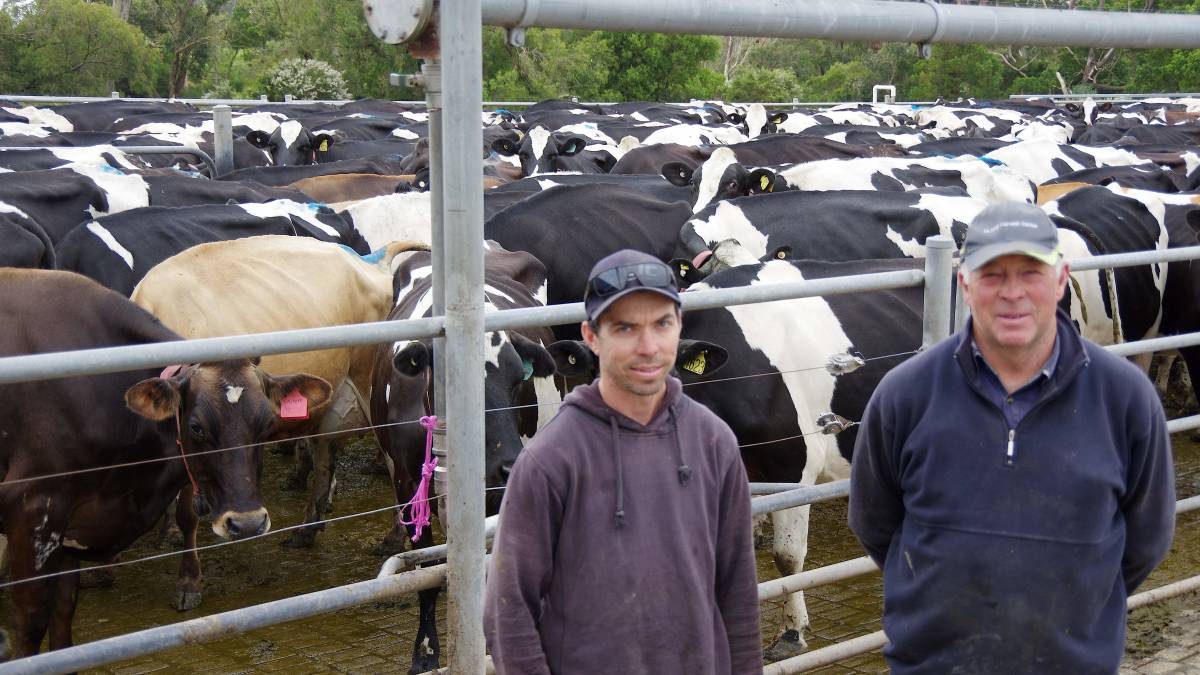 COPING: Shaun and Graeme Cope, Fish Creek, who spent the summer of 2018 trying to get a chronic mastitis problem under control in their 840-cow herd.

As every dairy farmer knows, mastitis is an inflammatory response that leads to production losses, culling of livestock and, in some herds, becomes a chronic infection problem.

By the time mastitis is apparent - through changes to the udder and abnormalities in the milk - it is generally already a problem in the herd, affecting more than one cow.

There are many reasons for mastitis affecting the herd - introducing newly-bought cows that already have the infection, environmental problems and animal management are among the chief culprits.

Depending on the origin of the pathogen, mastitis organisms responsible for the infection can be classified as contagious or environmental.

Irrespective, the pathogen spreads quickly and the infection can cause a 50 per cent drop in milk yield.

Graeme, Jenny, Shaun and Sharna Cope, of Fish Creek, Victoria, found mastitis in their herd was an ongoing summer problem in 2018.

Shaun remembers the first indicators of the herd's mastitis problem were identified on the milk filters.

The dairy procedure includes cleaning equipment after each milking in the 50-stand rotary platform, waiting until the cows are settled before putting cups on, ensuring each cow is milked out thoroughly and teats are sprayed.

Cleaning applies throughout the milking process, given more than 800 cows go through the system twice a day.

The cows' udders are also washed before cups are applied.

Once on the platform, the cow stands for a little while before cups are applied.

Shaun said this was to allow let down to occur before applying the miking cups.

Calmness around the animals is standard procedure in the dairy.

Teat spray was automatically applied as the milking cups come off the cows' teats. STRIPPING: Stripping the teats became commonplace for the cows with mastitis.

"We were stripping cows once a week looking for mastitis. The technicians from Davies Way were out, taking tests from the air pulsations to make sure they're correct; that we were milking the cows properly; and there are no blocked-up filters anywhere," he said.

"We were getting 10 to 12 cows a week showing high cell counts. We'd treat one group of cows, and the following week we would find another group of cows with mastitis.

"Our focus every milking is keeping the cows calm and there's no rushing through milking. We wait until the cows let down before we put cups on.

At calving time, an additional person in the dairy is responsible for milking fresh cows into the bucket.}

As the high cell count in January continued into February 2018, and after realising there were no obvious breaches in the dairy, Graeme looked outside for an environmental problem.

Among the things considered was the difference in environment between summer and other periods of the year.

"We worked out the mastitis happened pretty well as soon as we started feeding the brassica crop," Shaun said.

"Graeme worked out it was probably an environmental problem and decided the herd's grazing regime would change.

"Dust was also being raised in the laneways, but we couldn't really do too much about the laneways, except walk the cows slower, which we now do."

Knowing cow behaviour helped Shaun and Graeme to identify that the herd pushed through the gate onto a new crop; and there is a lot of trampling, creating a dusty environment in the drier summer months.

"They run a bit when they first get into the crop, from their eagerness to start grazing it," Shaun said.

"That creates a really dusty environment.

"We're still using the same teat spray, but now we're conscious that it takes a while for the teats to close up after milking and we need to keep the dust out.

"We have to allow extra time for the cows' comfort.

"We now manually spray the teats after the cups come off, too. So the cows get a double spray to get a good barrier on the teats."

The herd's grazing regime changed and following afternoon milking, the cows go onto pasture with some silage.

Over summer, the herd grazes the brassica crop in the morning.

"It was an outbreak that lasted a few weeks and since making the changes we haven't had a problem that extensive again," Shaun said.

A tool they now use TEST KIT: The milk sample is poured into the test kit and colourmetric testing ensures samples are sent for diagnosis by cloud-based technology.

Since autumn 2018, a Mastatest testing kit is used to identify the bacteria, and therefore the best treatment option for mastitis.

The idea of using the kit is to treat for an anti-inflammatory response first while waiting the 22 hours for results from a milk sample.

There are four types of mastitis that can be identified using this testing kit - streptococcus uberis, staphylococcus aureus, coagulase negative staphylococcus, and coliform bacteria such as e. coli and klebsiella.

When mastitis is suspected in a cow, a sample of milk is expressed by hand by the worker and placed in one of the holders, to instantly be part of a cloud-based diagnostic system.

A camera in the box takes multiple photographs of the samples over time, which allows diagnosticians in New Zealand to identify the pathogen strain.

They communicate, within 22 hours of the first photographs being received, the identity of the mastitis pathogen and the recommended drug.

"The results are emailed to us, and communicated to our phones," Shaun said.

The Mastatest is a colourmetric test that works by observing and interpreting colour-change phenomena in the milk sample, using colour photography to identify those changes.

"In 22 hours, we have a definitive result and recommendation of a drug to use to treat it," Shaun said.

"While we're waiting for the result we use an anti-inflammatory for the cow to take the swelling out of the udder and teats."

The cow is also put on auto-draft, so as she comes through the dairy, she is identifiable with a potential health problem.