A South Australian Illawarra trumped both its Holstein and Illawarra herd mates when its recently achieved a lifetime production of close to 150,000 litres within a 500-cow herd. 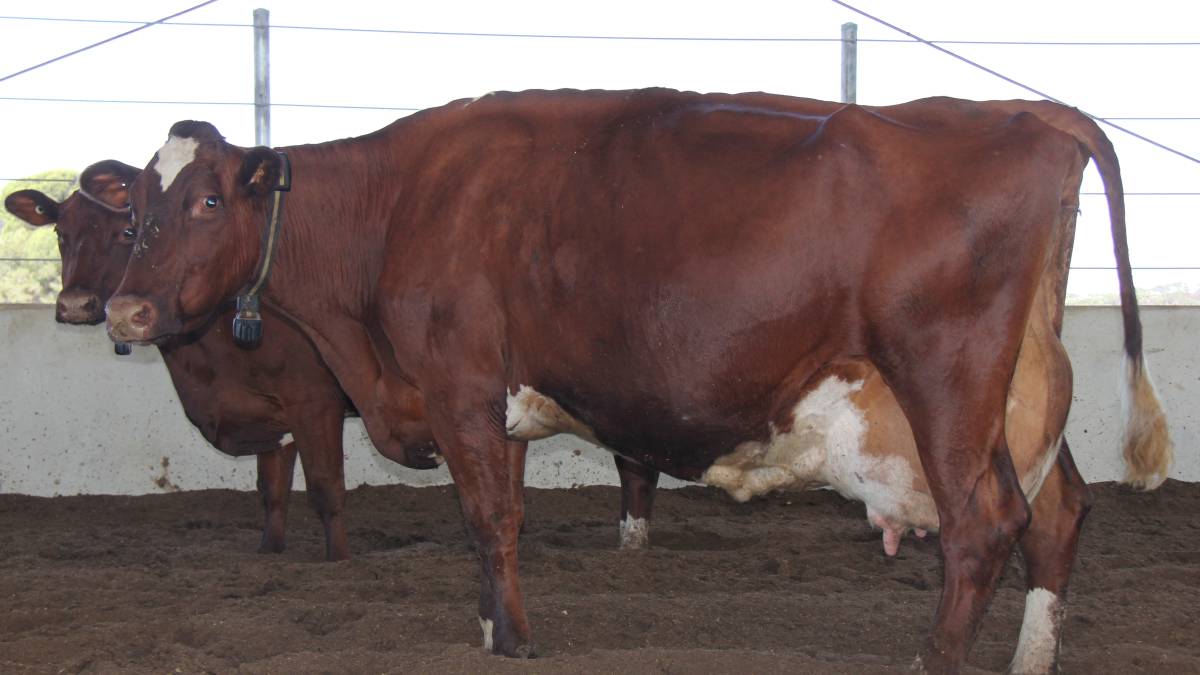 A South Australian Illawarra trumped both its Holstein and Illawarra herd mates when its recently achieved a lifetime production of close to 150,000 litres within a 500-cow herd.

Blackwood Park Buttercup 221 VG88 STP is one of 100 registered Illawarras in the Murray Bridge herd of David and Karen Altmann and family.

Its lifetime work boils down to 3936 lactating days - with a lifetime production average of 37.2 litres a day.

It is a record lifetime production for an Australian Illawarra.

It also remains No.1 among 60 cows (both Illawarra and Holstein) in Blackwood Park's herd - with a rolling herd average of more than 12,500-litres - to break through the 100,000-litre lifetime production threshold.

Buttercup 221 is also a STP Diamond Award winner, and it heads up a maternal line that includes three generations of national production record holders (for age) within their breed.

Importantly - for the rest of the industry - it is also the great granddam of Semex sire Blackwood Park Beemer, which is sired by Wallumlands Blush's Savard.

Beemer is the No.3 in the Illawarra breed for Balanced Profit Index (BPI) in the August Australian Breeding Values (ABVs)] based on parent average, because its oldest calves have only just started hitting the ground this year.

David Altmann describes Buttercup 221 as "remarkable cow", saying it proved without a shadow of a doubt that longevity, reproductivity and production don't need to be mutually exclusive within a commercial operation.}

Buttercup 221 died this year in its sleep, aged 14.1 years, a month shortly after completing its 10th lactation.

"She was a once in a lifetime cow for us," David Altmann said.

"I haven't had any cows in our herd beat her for lifetime production. She was just so incredibly milky."

While Buttercup 221 was undoubtedly a headliner at Blackwood Park, it isn't its sole bell ringer. Blackwood Park holds a whopping 13 of 18 (72 per cent) of the national 305-day record productions available in the Australian Illawarra Society.

It's an incredible legacy and a tribute to the commercial success which Illawarras can achieve within a mixed herd.

Blackwood Park 221 passed its ability to breed and to milk to her daughters.

Buttercup 225 also broke the junior four-year-old record for butterfat (567kg) and the mature record for protein (502kg) and butterfat (649kg).

It had a lifetime production (in six lactations) of 92,357 litres.

It was also the Intermediate Illawarra Champion at the 2014 Adelaide Royal show.

Sadly, Buttercup 232's career was cut short this season by a stifle injury.

"All three of those cows behind Beemer were super dairy cows, and absolute milk machines," Mr Altmann said.

"To have that consistent production in his pedigree, in addition to the VG classifications, the STP Diamond and Silver awards, while getting in calf every year is important for commercial operations.

"All of those cows peaked at 15,000 litres multiple times. The Buttercups are definitely one of our strongest families."

Without performance, there is no room at Blackwood Park.

Its Illawarra average is 10,400 litres, and six of them have breached 100,000-lifetime production achievements.

Today, the 850.5ha farm is farmed in three blocks at Murray Bridge, the Adelaide Hills, and at Cooks Plains.

The milking herd has access to 20.25ha in total, on a home farm, which gets 279-millimetres (11-inch) annual rainfall.

It has no internal spans, and its concrete wall surround is 1.2m high.

The dried compost shed sits adjacent to the undercover feed pad, which includes some 42 tonnes of Sure-Foot rubber matting, that took 13,500 drill holes to bolt down.

Blackwood Park was one of the first Australian herds to invest heavily in the SCR Heatime HR System (Semex's reproduction and health-monitoring software including a rumination recorder).

Because of the technology, they are joining cows that come on heat from 50 days fresh.

The herd is currently averaging 2.1 AI inseminations per pregnancy.

The 30pc balance of its milk is absorbed by Victorian processor Lactalis.

Mr Altmann said switching to a total mixed ration system, milking three times a day in 2006 wasn't without its pressure points or its detractors.

But, the minimum 15pc more milk for the extra 3pc input made the additional work worth it.

And, together with the premium-priced speciality milk contracts have made it possible for son Jake to be the sixth generation to join Blackwood Park.

"When we went into this sort of system, everyone said the cows wouldn't last and we'd wear them out. But these cows are enduring, and they are going back in-calf. We do still have cows in the herd that are 12-years plus, with eight or nine lactations behind them, and the herd's average number of lactations is five," David said.

"I think it's about getting the balance right of quality and quantity of the hay, silage, grain and by-products we feed. I guess, after 15 years, we've got a little bit of experience now."

"I do think that cow comfort has an enormous bearing on high producing cows. Without question, the more milk they give, the more comfort they need," he said.

"Through this process, I've come to realise the absolute importance of it. When we first went into the barn, it was winter, and it was wet and cold. Production went up 1.5 litres/cow/day within 36 hours.

"But, we are most challenged by summer, and during those months the shed is worth an extra two litres per cow per day to us.

"And, we have changed nothing else outside of opening the gate into that shed to get those results."

"If people want to run a mixed herd, Illawarras definitely do compete in the paddock and in the TMR system. They don't get bossed around, and they are easy-care cows."