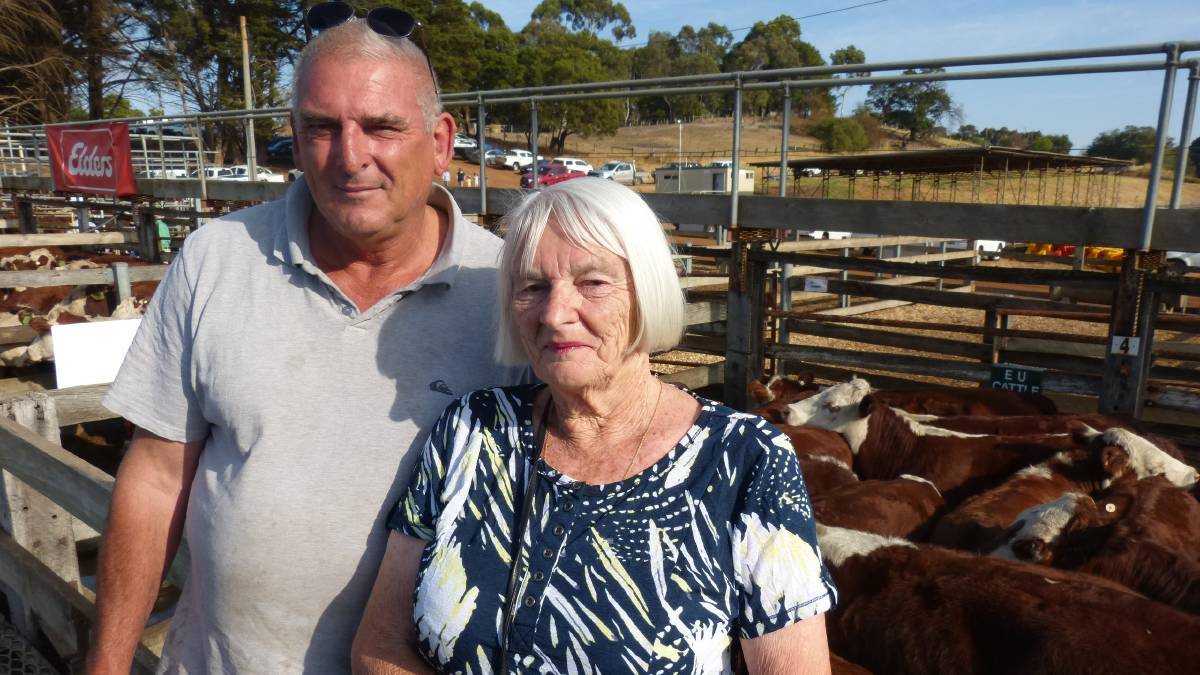 SALE SUCCESS: Dale Sullivan, with his mother Bernice, of Shallum in Casterton, sold 95 steers at the Casterton saleyards in January 2021 to an average price of of 283 cents a kilogram, including a pen of 19 steers weighing 360kg for 318c/kg, or $1144/head.

Property expansion and a pasture renovation program are enabling the Sullivan family to build-up cattle numbers on their Killara farm, Shallum Holdings.

About 70 per cent of the family's 470-head breeding base is now polled for ease of management and staff and animal health and welfare.

They also run a crossbred self-replacing ewe flock for production of prime lambs.

The Sullivans needed to secure more land around Casterton to be able to boost livestock production.

They also recognised how important it was to lift the quality and productivity of the pasture feedbase to be able to increase stocking rates across their 1530-hectare holdings.

Using a grass-fed system, with some home-grown hay provided to stock as a supplement during periods of annual feed gaps, the family's cattle enterprise is set up for joining in September and calving in late February and early March.

Like most properties in the region, their farming land is characterised by sandy loam-type soils and some clay areas close to the Glenelg River flats.

Dale Sullivan said big tracts of the property had traditionally been heavily wooded with Red Gums and required ongoing stump removal and clearing.

"Along with this challenge, a lot of our pastures were also 30-years-old," he said.

"We knew we needed to upgrade and renovate the land to be able to push our livestock enterprises harder to boost profitability, and this is an ongoing process each year."

The Sullivans now grow fodder crops, such as sorghum, which are cut for hay or silage.

These are retained for two years and then replaced by sowing permanent pastures, predominantly comprising ryegrass and subclover.

Mr Sullivan estimates this improvement strategy, coupled with close attention to plant nutrition and fertiliser, had boosted their overall feedbase productivity by about 30 per cent and allowed them to lift stocking rates.

"We rely on pasture advice from our agronomist and contractor," he said.

"And we have done some feed on offer (FOO) courses through the sheep side of our business that are valuable and applicable to both the cattle and sheep enterprises."

With an improved pasture base and genetic selection on Poll Herefords with high growth, the Sullivans' primarily market is annual weaner steer and heifer sales.

They aim to turn-off steers at 350 kilograms liveweight and any excess heifers at 300kg.

Most are sold locally through the Casterton saleyards. But they also send steers to Naracoorte and Hamilton to capitalise on the strong buyer presence and competition at these major selling centres.

This year, the Sullivans sold steer calves a bit earlier than usual, due to the exceptional spring and summer seasonal conditions they experienced, and the top lines weighed-in at 400kg or more.

By the end of January, all weaners were sold - except for about 50-70 head that were dropped in spring for winter sales. This enables income spread across the year to offset some business risk.

Mr Sullivan said the weaner lines that they sold so far this year reached "amazing" prices, averaging $1637/head for steers and about $1400/head for heifers.

"They were at slightly higher weights, because the pastures were so good, and they were some of the best calves we have ever produced here."

Mr Sullivan said they had been using Hereford and Poll Hereford bulls from Melville Park for about 30 years and saleyard buyers recognised the quality of their progeny offering each year.

He said their focus had switched from long-legged bulls, favored by buyers about 10 years ago, to more early-maturing types that better suited feedlotters.

"The bulk of our weaners go into the feedlot, so we really breed to match their requirements for growth and high meat yields," he said.

"They need to make sure they are also getting an optimum margin from finishing our product out of the paddock."

"We want a good mix of carcase and fertility traits to produce an all-round performing steer or heifer," Mr Sullivan said.

"We do cull any non-performing heifers in the first year if they don't produce a calf, so our herd naturally is highly fertile."

Mr Sullivan said the Moyle family's stud breeding goals aligned with that of his family and he was confident they were tracking along the same trends of genetic improvements in key profit-driving traits.

"He is just a well-balanced animal, with the benefits of a beautiful coat and a docile nature.

"He also has good muscle fat and his first progeny - from a line of heifers - are looking promising."

Mr Sullivan said the Melville Park stud was located not far from them, which added to his confidence that its bulls would perform under their local conditions - right from day one.

"I have been running Herefords and Poll Herefords all of my life and I like the breed and how well it does on our farm," he said.

Melville Park stud principal David Lyons said he expected strong demand for quality polled bulls would continue in 2021 and this trend had confirmed the stud's decision to scale back on horned animals.