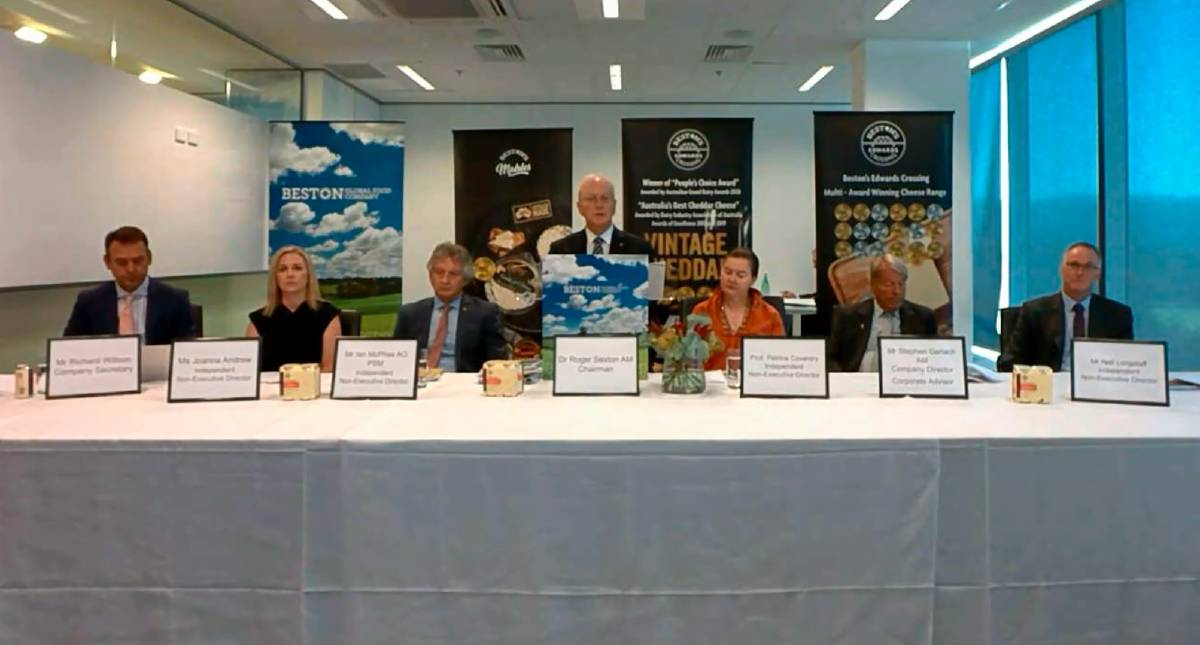 ON-TRACK: Beston Global Food Company chair Roger Sexton (centre) - with the board during the online AGM - says despite challenges, the company is moving forward with its 10-year plan.

CONCERNS about a potential "spill" of the board of Beston Global Food Company, at its postponed annual general meeting on Friday, have been allayed

CONCERNS about a potential "spill" of the board of Beston Global Food Company, at its postponed annual general meeting on Friday, have been allayed, with the motion voted down.

But it follows a second "strike", after its remuneration report did not receive enough support for the second time, following the vote in 2019.

The AGM had been adjourned to Friday from November over "concern(s) about possible voting associations in the proxy votes".

In December, Beston announced it had referred the matters to the Australian Securities and Investment Commission and the Foreign Investment Review Board for independent inquiry and consideration.

While Beston chair Roger Sexton said the matters were still before those bodies, the proxies that were of concern were received and allowed to vote on Friday.

Prior to the AGM, 713 proxies had been received, equating to 75 per cent of the shares.

In the first resolution, on the issue of the remuneration report, 55.4pc of these received proxies voted in favour of accepting the report.

But with more than 25pc of the vote against the report, it triggered resolution two, a contingent spill motion, which was then voted down - with 55.5pc against the spill.

Dr Sexton said the "small number" of shareholders who voted against the remuneration report and were "agitating" for approval of the spill motion, "have not put forward an alternative strategy or business plan... nor have they demonstrated they have the means to deliver on the existing strategy".

He said recent years had been ones of "many different challenges", including two years of drought and the COVID-19 pandemic.

"While the financial results of the (2019-20 financial year) fell short of our expectations, for a number of reasons as have been explained to shareholders, including the impact of COVID-19, a number of significant financial and operational milestones have been achieved," he said.

"Importantly, despite all the setbacks, we have "stayed the course" and pushed ahead with the implementation of our 10 year business plan.

"The business plan is on track and is poised to deliver substantial and progressive increases in earnings over the next five years as we extract more and more value from our milk supply."

Beston says its milk supply had increased to 145 million litres a year, and was expected to lift again to about 160mL by the end of the 2021-22 financial year, while mozzarella production had increased from 9000 tonnes late year to about 13,000t in 2019-20.

A $2m grant from the SA government has also accelerated the expansion of the Lactoferrin plant after stage two was able to occur concurrently with stage one, with an expectation production will lift to at least 20t a year.

A third resolution had Petrina Coventry voted back on the board, while a fourth - the re-election of Jim Kouts - was withdrawn after Mr Kouts decided to retire and was replaced by Neil Longstaff at the start of the month.

Another resolution considered the election of Chinese-based shareholder Kunteng's representative Yuan Ma attempt to get a seat on the board.

Dr Sexton said to-date, the board had been unable to assess Mr Ma's "capabilities and potential contributions within the context of the board's skill matrix and established policies".

During the vote, 57pc of the proxies voted against Mr Ma's inclusion as a director.

While there were shareholders that expressed "frustration" at the time taken for the company to turn a profit, Dr Sexton said Beston had experienced "a perfect storm" of challenges.

"Has the business taken longer to achieve its objectives that we expected? Yes it has," he said.

"Has the process of growth and development taken a little longer than we expected? Yes, in many respects, it has. But we have never sought to run away from the challenges or hang up our hat and say "it is all too hard"!

"Right now, Beston is continuing to move systematically and purposefully forward with the implementation of our 10-year plan."

Dr Sexton said there were also plans to roll out new product Immune+, which was still under testing, and would go into commercial production in about a month's time, starting in SA Foodland stores, before being available nationwide.

The story Beston sticks to plan after spill voted down first appeared on Stock Journal.