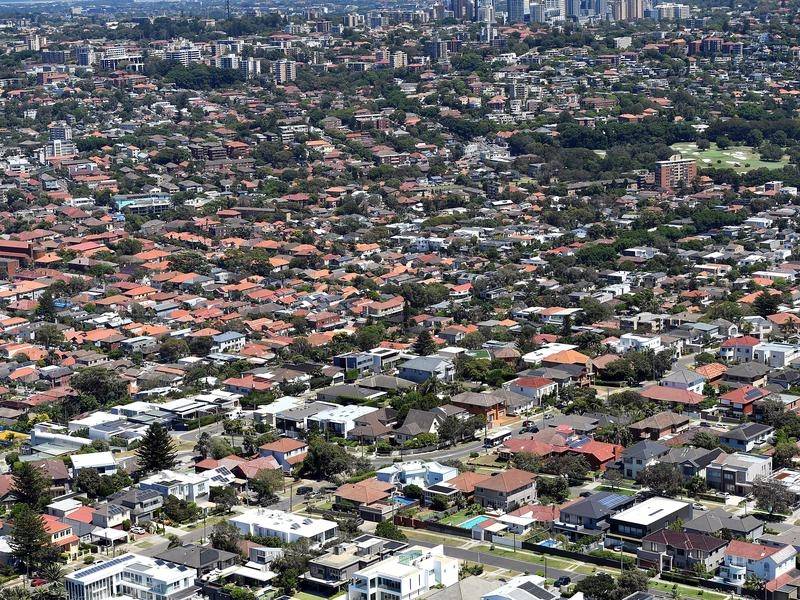 ESCAPE: City residents are fleeing for the safe haven of the country, statistics now show.

Australian capital cities have seen the biggest loss of people into the regions on record.

Australian capital cities have witnessed the biggest loss of people into the regions on record.

Most of the states welcomed enough new arrivals to fill a fair sized town.

It's now official, even economists are calling the escape to the regions a "stampede".

The Australian Bureau of Statistics has confirmed the pandemic-inspired trend with the release of quarterly figures showing the movement of people around Australia.

It is the same trend being seen by overwhelmed real estate agents who are calling the demand on regional properties a boom.

CoreLogic data shows regional home prices surged by 7.9 per cent over the year to January 2021 - the biggest annual jump in 16 years.

Most of the demand is still being seen within commuting distance of the cities or within an hour's travel time.

Many of those wanting to move plan to continue working from home and internet service providers have been pushed to lift their game in the bush.

A national survey conducted by NBN Co. found the coronavirus push to work online provided a "more flexible approach" to where they lived and worked.

Of those asked, more than half wanted to move, according to NBN Co. chief development officer (regional and remote) Gavin Williams.

The interstate movement of people was the quietest it had been for six years, again courtesy of the pandemic border closures. 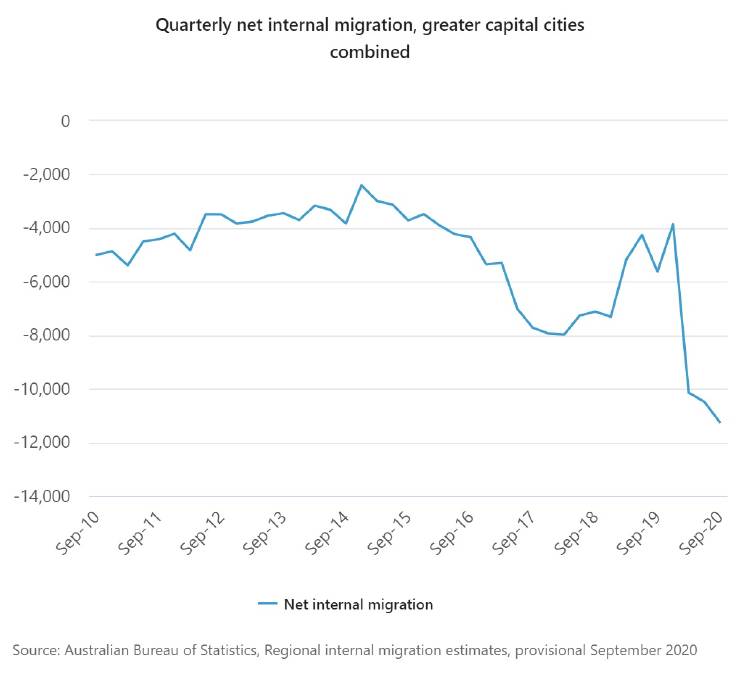 Thousands are leaving capital cities to move to the country. Graphic: ABS.

The ABS data shows capital cities saw their biggest quarterly loss of people from internal migration on record (with statistics going back to 2001).

A total of 11,247 people left capital cities in the quarter and moved to regional areas.

In NSW enough people moved from the cities to create a second Cobar, in Victoria the city slickers would have created a second Daylesford.

For Queensland, the movers would have packed out Oakey or in South Australia enough people moved bush to populate a second Clare.

Sydney had a net loss of 4700 people to the rest of the state, building on the 3700 from the previous quarter

Melbourne also had a net loss of 4700 people to the rest of the state after the rush (5900 people) began in the previous quarter.

Brisbane went against the trend with a net gain of 230 people from the rest of the state.

In other supposed "safe havens" from community transmission and the harsher restrictions, Adelaide had a net loss of 240 people to the rest of the state.

Perth had a net gain of 710 from the rest of the state.

Hobart had a net loss of 30 to the rest of the state.

Darwin gained 160 people from the rest of the NT, its first net gain from internal migration since 2015.

The ACT saw a net loss of 140 people from internal migration.

There's also another way to view the ABS data which also records the arrival of new people into "the rest of the state" during the quarter.

A research note produced by Commonwealth Bank likened the evidence provided by the ABS as a "stampede" to the country, according to senior economist Ryan Felsman.

Dr Allen said she believed once the coronavirus vaccine rollout was completed the trend would reverse.

"What happens when people get to the regions and people want staff to return to their offices, tele-commuting is not so achieveable then?

"People who are moving will also soon realise there is an inadequate level of resourcing in regional areas in areas like education, health and employment."

Other economists have also questioned the ability of regional areas to "cater to huge inflows of new residents".