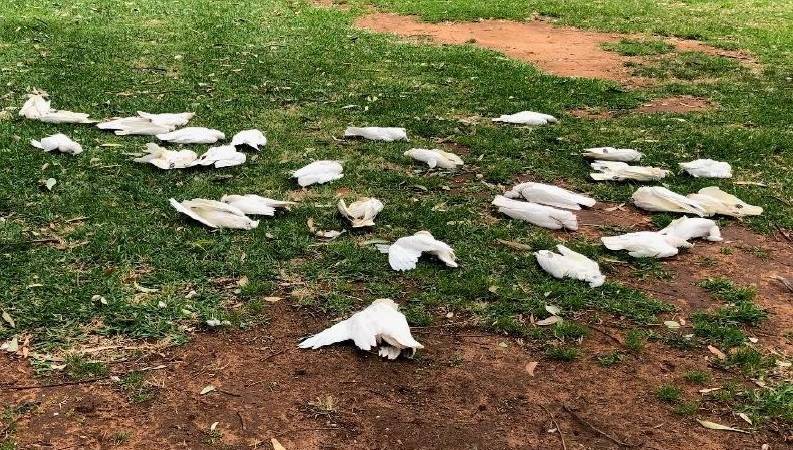 LAW BREAKERS: The poisoning of 100 corellas has focused attention again on the big populations of corellas around regional Victoria. Picture: Office of the Conservation Regulator.

The poisoning of a flock of native birds in the Murray River town of Robinvale has put the focus again on problem corellas.

The poisoning of a flock of native birds in the Murray River town of Robinvale has put the focus again on problem corellas.

There are many people wanting these destructive native birds declared a pest.

Whole communities across Victoria have complained about the arrival of corellas in plague numbers.

The corellas eat lawns and trees, TV aerials and even rip nails from buildings. They have also appeared to have developed a special taste for synthetic hockey and bowling greens in country towns.

Municipal councils in western Victoria have investigated the use of laser lights, noise makers and gas guns to frighten away the roosting corellas.

Culls have been authorised but the shooting programs have only been a short-term fix.

A spiderweb of fishing line was strung up above the Natimuk Bowling Club greens in 2016 after corellas badly damaged its synthetic turf.

Despite their reputation, Little Corellas are native birds protected by law.

The Victorian Government is in the process of overhauling these laws after the deaths of koalas in western Victoria last year, and the shooting and poisoning of many wedge-tailed eagles in Gippsland.

Four experts will suggest possible changes to Victoria's Wildlife Act with a focus on whether penalties are tough enough.

Community consultation on the proposed changes will open next month.

At Robinvale in December, birds were seen falling from trees.

It has now been confirmed the birds were poisoned with Methomyl - an active ingredient found in various insecticides.

A spokesman for the Australian Pesticides and Veterinary Medicines Authority said Methomyl was registered for use in Australia for the control of insect pests in crops and is safe to use according to label directions.

Methomyl is considered highly important for pest management in some horticulture crops and is widely used against fruit fly.

Anyone with information on the Robinvale bird deaths are being urged to call Crime Stoppers on 1800 333 000.