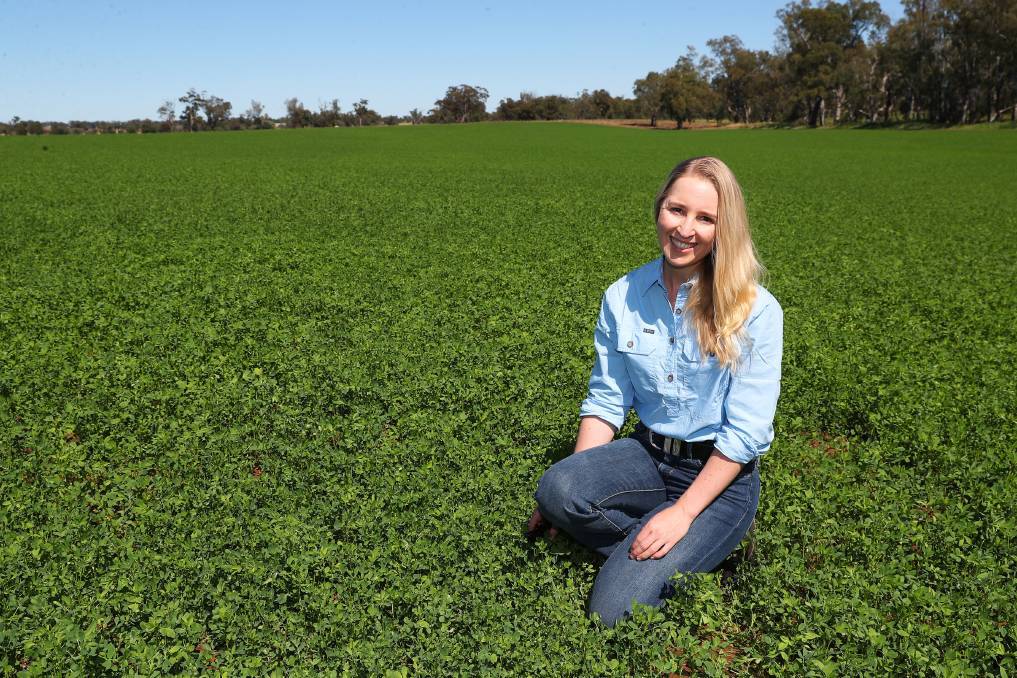 2021 Nuffield Scholar Claire Petterson, Collingullie will investigate global biosecurity practices which can be applied to hay businesses as part of her scholarship. Photo: Emma Hillier

Hay is moved all across Australia, especially in times of drought, and 2021 Nuffield Scholar Claire Petterson believes more tailored biosecurity information is needed to improve the profitability and sustainability of the industry.

Ms Petterson was announced as one of four NSW 2021 Nuffield Scholars last year and with the support of Animal Health Australia (AHA) and Plant Health Australia (PHA) she is set to investigate global biosecurity practices which could be applied to hay production businesses in Australia.

It is a natural topic for Ms Petterson as she currently manages her family's hay and beef cattle operation at Collingullie in the Riverina, alongside her father John.

Following the completion of her vet science degree at Charles Sturt University and time spent as a vet in clinical practice, she worked for government and non-government agencies in biosecurity for five years, including a year in New Zealand with the Ministry of Primary Industries where she worked on the Mycoplasma bovis disease eradication program.

"I was involved with the farm throughout that time but midway through last year I made the decision to come back to the farm full-time," Ms Petterson said.

The Pettersons produce primarily lucerne hay, as well as teff, oaten and rye hay, alongside a small beef cattle enterprise.

When Ms Petterson returned to the farm she realised just how important pest and disease control was for producing high-quality, high-yielding hay crops, however when she started to research biosecurity in the hay industry, the results came up short.

"I think more information would be useful for hay producers and buyers," she said.

"The introduction of an exotic pest or disease where there has been no previous exposure could have a devastating effect.

"For the hay industry both exotic and endemic pests are a concern. We're trying to both manage what's already here and prevent more pests and diseases from moving onto the property."

Ms Petterson is particularly interested in non-chemical methods to control pests, weeds and diseases, such as rotational cropping to combat resistance and using mowing and grazing crops to interrupt pest life-cycles.

"Those methods are already done here but through my investigation I would also like to look at how genetic improvement of lucerne and other hay crops can lead to more disease resistance and therefore decrease reliance on spraying," she said.

The United States is top of her list of destinations to visit, with the US a major producer of lucerne.

Ms Petterson said US producers are also experienced at managing endemic diseases such as Xylella fastidiosa which has not reached Australia.

"It would affect hundreds of commercial plant species in Australia if it was to become established."

Other countries like Argentina have also done battle with lucerne pests and diseases which we are fortunate not to have seen in Australia.

"One lucerne disease in Argentina (Alfalfa dwarf disease) is reported to reduce yields by up to 30 per cent, so that would be the type of thing we really want to avoid in Australia."

However, Ms Petterson will have to start her investigation a little closer to home given the current international border closures.

"I would like to go to the lucerne seed growing areas in south eastern South Australia and I would also like to visit the Lachlan Valley where a lot of hay is produced."