WA's regional residential market has lagged behind other States. 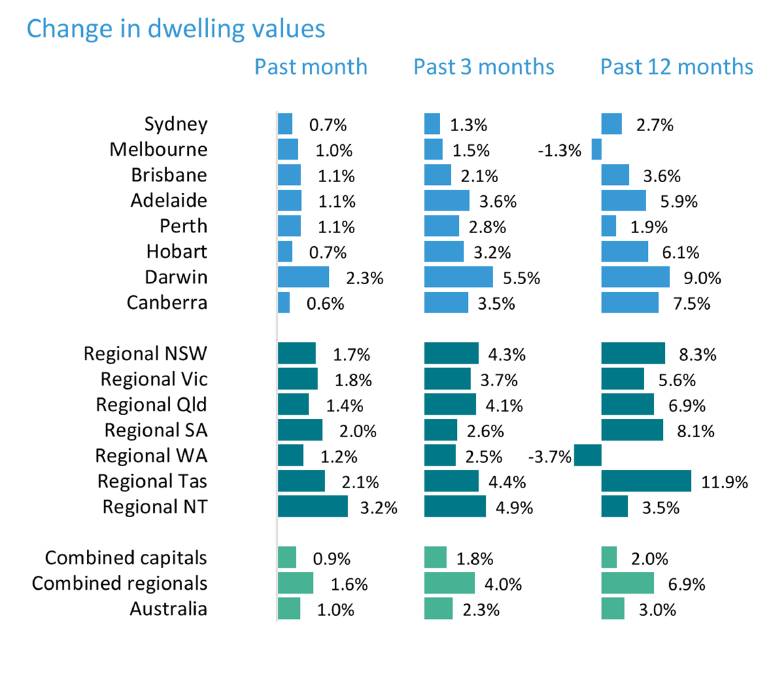 WESTERN Australia's regional residential market has lagged behind other States, which experienced a strong year in 2020.

CoreLogic's Hedonic Home Value Index report indicated the property values for the national regional market rose by 6.9 per cent for the 12 months to December, compared to a drop in WA's regional values of 3.7pc for the year.

WA was the only State to record a decline in regional house values for the year.

Regional Tasmania came out on top, with a rise of 11.9pc, followed by New South Wales at 8.3pc, South Australia with 8.1pc, Queensland at 6.9pc, Victoria with 5.6pc and the Northern Territory.

Four State regional markets performed better than their respective capital city markets, with WA, SA and the NT falling behind their city markets.

The Perth market saw a mild increase of 1.9pc and was the second worst performing capital city market, in front of Melbourne which had a 1.3pc decline.

WA's regional rental market was much stronger than the sales market in 2020, in fact it was the second best performer with a 6.2pc increase in rental yields, just behind the NT at 6.7pc.

It also topped Perth's rental market, which saw a 4.5pc rise in yields.

Looking within WA, seven of the nine regional centres experienced median house price growth during the December 2020 quarter, according to the Real Estate Institute of WA (REIWA).

Esperance was another strong performer, where median values rose to $343,000, an increase of 3.9pc during the quarter and 9.8pc compared to the December 2019 quarter.

Five regional centres saw sales activity increase during the quarter, with reiwa.com data revealing Karratha and Geraldton were the standouts.

"Sales activity was up 15pc in Karratha and 12pc in Geraldton during the quarter," Mr Collins said.

"The other centres to record improvements were Port Hedland (up 7pc), Albany (up 4pc) and Kalgoorlie-Boulder (up 1pc).

"Overall, the regional sales markets are showing strong signs of recovery, with mining sectors such as Port Hedland and Karratha leading the way.

"This is in part due to the commitment by mining companies to keep their workers in WA as they continue to navigate the COVID-19 travel restrictions.

Mr Collins said REIWA members have also reported they've heard from a growing number of people seeking to escape the city for a sea change.

"With the fallout of COVID-19 changing how we do business, Western Australians are increasingly able to work remotely and therefore have more freedom to choose where they want to live," he said.

"It will be interesting to see whether this translates to longer term regional population growth."

Listings in the regional rental market declined in seven regional centres during the December 2020 quarter.

"Busselton and Bunbury saw the biggest reduction during the quarter, with listings down 36pc and 23pc respectively in these areas," Mr Collins said.

REIWA reported that all nine regional centres recorded an increase in rent during the quarter.

"With fewer rentals available across regional WA, tenants were having to offer more weekly rent to secure a lease," he said.

Port Hedland and Karratha recorded the biggest quarterly increase in rent price, with their median rents up $55 to $550 per week and $50 to $700 per week respectively.

"Almost all regional WA markets are now in a state of undersupply, with vacancy rates at or below one per cent in many cases," he said.

"Investors may want to consider regional WA as part of their investment portfolio, rather than just focusing on Perth."