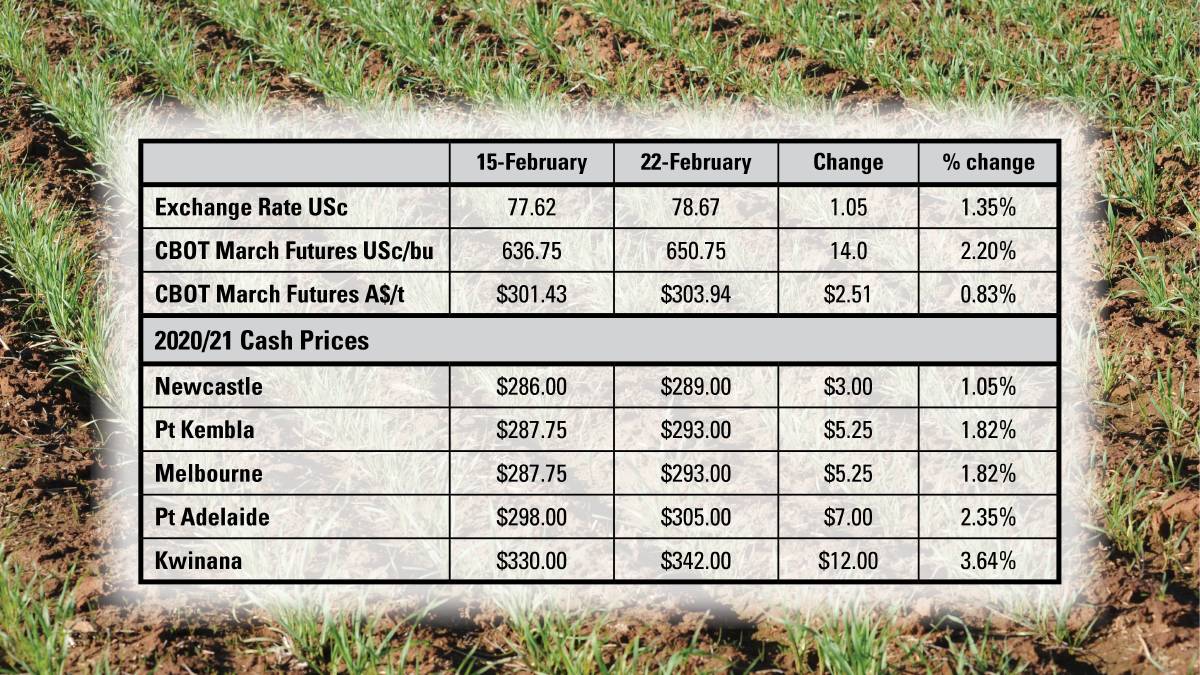 The Australian Dollar ended up sharply last week, closing in the United States on Friday night at US78.67 cents.

This is the highest closing value for the Australian Dollar since February 2018.

The currency is now closing-in on its highest levels for the past six years.

This has worked to keep the Australian Dollar value of Chicago Board of Trade (CBOT) futures on the defensive, despite ongoing gains in underlying futures.

The Australian Dollar value of CBOT futures is a reasonable surrogate for international prices for other countries as well.

Global wheat prices are high, but are not reaching excessively high levels - particularly in comparison to alternative crops.

As a result, we continue to get reports that plantings of spring wheat in various Northern Hemisphere countries might not be as big as expected this year. Growers maybe shifting to more lucrative options, such as canola, soybeans, corn and - in some cases - spring barley.

When it comes to where acres go, it is the relative pricing compared to alternatives that count.

Across a long period of time, Northern Hemisphere farmers have been drifting away from wheat and into alternatives - particularly in North America.

In Australia, the alternatives to wheat are limited in a lot of regions.

But we can expect to see canola get a good run in its own right, or as a break-crop -particularly if our prices follow those of Canadian prices and are well above $600/t at planting time.

Meanwhile, CBOT futures remain volatile and were trading through a range of US20c/bushel for most days during last week.

The volatility is being driven by the extreme cold that swept through the US and potentially caused winterkill damage.

And that is the point - in terms of "potentially" causing damage.

In previous years, the market has taken on-board the risk of winterkill, only to find that in the end there was limited impact.

No one wants to get caught again on that one. But this year, the cold has been severe and some regions entered winter with crops not in good shape.

It is the uncertainty of the risk itself that is causing the volatility, and there is more cold weather forecast before we start to see the bulk of US winter crops begin to emerge from dormancy.

In early areas in Texas, where crop heading has started, significant damage is expected. But these areas are limited.

Sponsored by
Industry members have presented to a Senate hearing in Deniliquin
Test
Research shows stress is a major cause of pneumonia in lambs.
Test
Fashion designers are using the same inkjet printing technology you use at home to create new woollen fabric designs.
Test
The ag industry is expected to grow by $5 billion next year because of the measures taken in the budget, the Ag Minister says.
Test
FarmFest has pulled off a major coup by signing big pastoral house Elders as a major sponsor.
Test
Rural Aid volunteers working hard on Oxley Island dairy farm.
Test
RMAC calls for government to stop commercial dealings with those who won't finance law-abiding businesses.
Test
The US state of Texas is moving to make it illegal for plant-based food products to use the words "meat" or "beef" on their labels.
Test