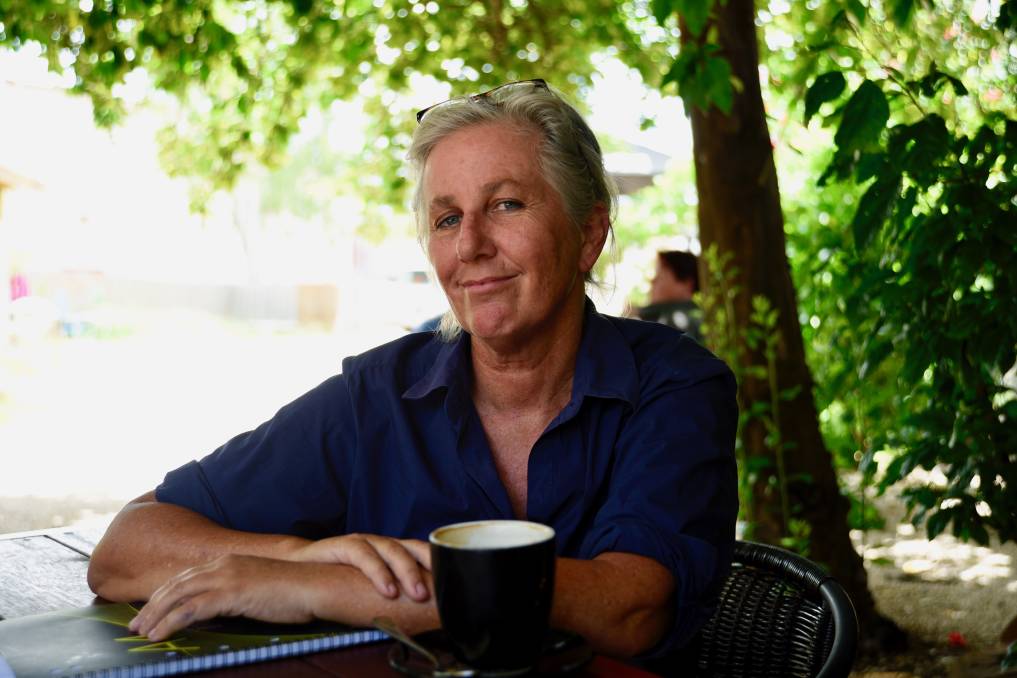 Sam Phelan says she is worried heavy rain near fracking sites could disperse chemicals and push them into the river system that is connected to Katherine. Picture: Roxanne Fitzgerald.

"I'm concerned we will end up with a contaminated water supply."

The search for oil and gas in the Beetaloo Basin has raised new concerns as heavy rain continues to fall across the region, risking contamination of rivers and aquifers closely connected to Katherine.

Katherine resident Sam Phelan, a veterinarian with experience in chemical residue in beef cattle, says she is worried chemicals could be dispersed and leaked into the town's water supply.

"Looking at the amount of water that is going through that Daly region, when you see two feet of water, it raises concerns," she said.

"We don't know what chemicals are being used at the sites because the companies are still claiming corporate confidence.

"Because of that, I'm concerned we will end up with a contaminated water supply."

The [NT] Government is not putting checks and balances in now to protect our water supply. - Sam Phelan

In 2018, following a rigorous inquiry into the on-shore gas industry, the NT Government lifted a moratorium on fracking.

The inquiry panel - spearheaded by Justice Rachel Pepper - said risks of a fracking industry could be reduced to acceptable levels provided all 135 recommendations were implemented.

But in its final report, Pepper wrote: "It must be noted that the strong antipathy surrounding hydraulic fracturing for onshore shale gas demonstrated during the consultations did not abate.

"For a significant majority of the people participating in the inquiry, the overwhelming consensus was that hydraulic fracturing for onshore shale gas in the NT is not safe, is not trusted and is not wanted."

With Katherine already facing inordinate environmental burdens, including the leaking of PFAS into the Tindall aquifer from the RAAF Base Tindal, Ms Phelan says she is concerned contaminants from fracking sites and open evaporated ponds will spread.

She is part of a well-established and growing anti-fracking movement becoming increasingly anxious the industry is forging ahead without all of the inquiry recommendations in place.

A recent scientific study which discovered tiny aquatic crustaceans living across a 500 kilometre distance has highlighted the aquifers from the Beetaloo to Katherine are highly connected.

"The concern is there are multiple sites of potential contamination from these wells and open evaporation ponds storing chemicals - these ponds could have been filled with toxic sludge and the rain has come along and dispersed that."

"The question is what has happened to all of those risk points in the case of all this rain we've just had."

"Big wet season flows across the Beetaloo region are a timely reminder of the risks that fracking developments can pose. Chemical spills could spread far and wide, while gas pipelines above ground may also be at risk," he said.

"It is also a timely reminder that the Strategic Regional Environmental and Baseline Assessment (SREBA) studies need to be conducted across multiple years before they can get any valid results.

"The Pepper inquiry specifically said that their 135 recommendations... could not guarantee that those organisms living in the underground aquifers such as the Stygofauna would be ok. More science is needed.

"It is not good enough for the government to keep pushing the 135 recommendations as their solution, especially when they are failing on implementing so many of them."

Minister for Environment, Eva Lawler, however, has dismissed claims the government is not upholding the inquiry recommendations.

"We have accepted all 135 recommendations of the Hydraulic Fracturing report and they are being implemented," she said.

"The Inquiry recommendations ensure that the environmental risks of fracking are minimised at all times, including during the wet season.

"A key recommendation of the inquiry was the development of a Code of Practice, which prescribes actions that industry must do to protect the environment and water resources.

"This includes ensuring wastewater is stored in above ground enclosed tanks at least eight hours before any predicted significant rainfall and that a minimum freeboard for tanks containing produced water and flowback fluid (wastewater) must be maintained that can accommodate a one in 1000 year rainfall event."

APPEA chief executive Andrew McConville also dismissed claims of malfeasance, saying "the Northern Territory has the most comprehensive and rigorous regulation for onshore gas and hydraulic fracturing in the world".

"The controls - which include multiple layers of steel and cement to separate the well from underground layers of rock and water and prevent deterioration over time - are designed to ensure that no contamination to the Territory's water resources occur.

"The previous Pepper Inquiry concluded that 'provided that a well is constructed to a high standard and in a way that takes into account the local geology and has passed all of the relevant integrity tests prior to, during and after hydraulic fracturing, there is a 'low' likelihood of integrity issues arising out of its initial construction'," Mr McConville said.