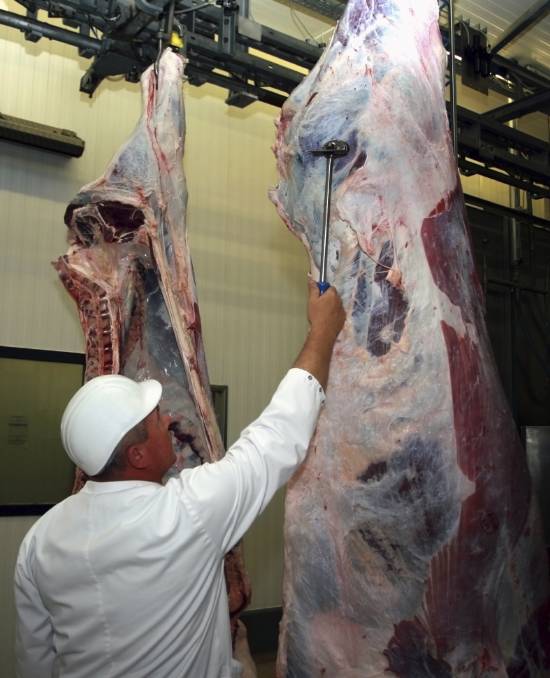 FEBRUARY FALL: The ripping good season in NSW, Victoria and some parts of Queensland has impacted the cow kill and led to the lowest export tonnage for the month in at least the past 10 years.

CONTINUING limited supply of slaughter cattle through February and diminished competitiveness in export markets saw by far the lowest export tonnage for the month in at least the past 10 years.

Just 66,818 tonnes were despatched to all destinations during February with the next lowest being 2017 at 74,800t.

Back then it was the wet winter of the year before exerting some influence over cow turnoff which kept kills at a reduced level and export tonnage down.

Now it is the ripping good season in NSW and Victoria and some parts of Queensland which has similarly impacted the cow kill since the good rains started in December and January 12 months ago.

At the end of January this year, major works were getting only three to four days a week and it was not until the second week of February that enough cattle started coming through to get a full week's kill.

But that was still on the back of dropped second shifts and reduced throughput per shift.

The comment at that time from processor contacts was a slight but noticeable turn in the season in some places.

By the third week of February, works were starting to develop a pipeline of cattle in front and grid rates started to come off.

Supply continued to improve to the point that by the last week of February, kill bookings were out to the third week of March.

In contrast to this year's reduced tonnage, February exports last year were 93,000t and 95,000t the year before.

On a cumulative calendar-year basis, exports now trail last year by almost 56,000t, a drop of 32 per cent.

With cows being the biggest component of the shift in supply dynamics it is not surprising that lean-meat export destinations are the ones most affected.

The United States is the standout.

In the past 10 years this is the only time January or February tonnage has fallen below five figures and to see it happen in both months emphasises how extraordinary a year this is.

China is the other market with a very high percentage drop in export volume.

After a 9100t volume in January, China recorded 11,676t in February which took the two-month cumulative figure to 20,844t, down 45pc on same period last year.

However there is an erratic nature in China's beef trade pattern with Australia which needs to be considered in any analysis.

It also needs to be remembered that Australian processors had plentiful supply in 2019 with cows costing up to $700/head less than more recent rates.

South American suppliers were still in the process of being approved for export to China at that time, leaving Australia as the go-to market.

In contrast to this year's reduced tonnage, February exports last year were 93,000t and 95,000t the year before. On a cumulative calendar-year basis, exports now trail last year by almost 56,000t, a drop of 32pc.

Since then there has been the COVID disruption, political discord, non-tariff barriers, wholesale approval of South American export plants and the US-China Phase One trade deal that have all impacted on Australia's beef trade with China.

Under the circumstances perhaps the January/February beef export figures represent a reasonable start to the 2021 year with China, at least for those plants not under arbitrary ban.

Japan meanwhile was the biggest volume destination of all markets in February at 17,878t but that figure was well under the consistently reliable volume of 22,000-24,000t recorded every February with the exception of one other month in the past 10 years.

The two-month cumulative figure shows a 27pc drop in volume to Japan.

Least affected of the major markets is Korea with a comparatively modest drop of 10pc.

Processors have been saying for some time now that there is push back in the premium markets against high asking prices for Australian product and US statistics indicate some shift is occurring in market share.

WITH supply now settled into a more stable proposition generally of three weeks' cattle in front, rates have also settled for the time being with little or no change to price grids.

Central Qld rates are either on par or less a 10c freight differential.

Townsville resumed last week and is perhaps better placed than most with space booked well into May.

In the southern states there has been no change to the published grids for Wagga and Naracoorte since February 18 when both ox and cow lifted 20c. They remain at 675 and 610 respectively.

At Wagga on Monday a good offering of well finished heavy cows was quoted 3-4c/kg dearer but this just brought them into line with grid rates.

Heavy steers and bullocks on the other hand showed the equivalent of rates in excess of 700c.

Feeders pressed hard on the heels of processors for the lighter end of the heavy steers and in the bullocks there was only a modest offering of just over 100 head.

In the US imported beef market, prices were slightly lower last week largely on New Zealand product, according to Steiner.

Slaughter levels are thought to have increased in NZ due to normal seasonal turnoff.