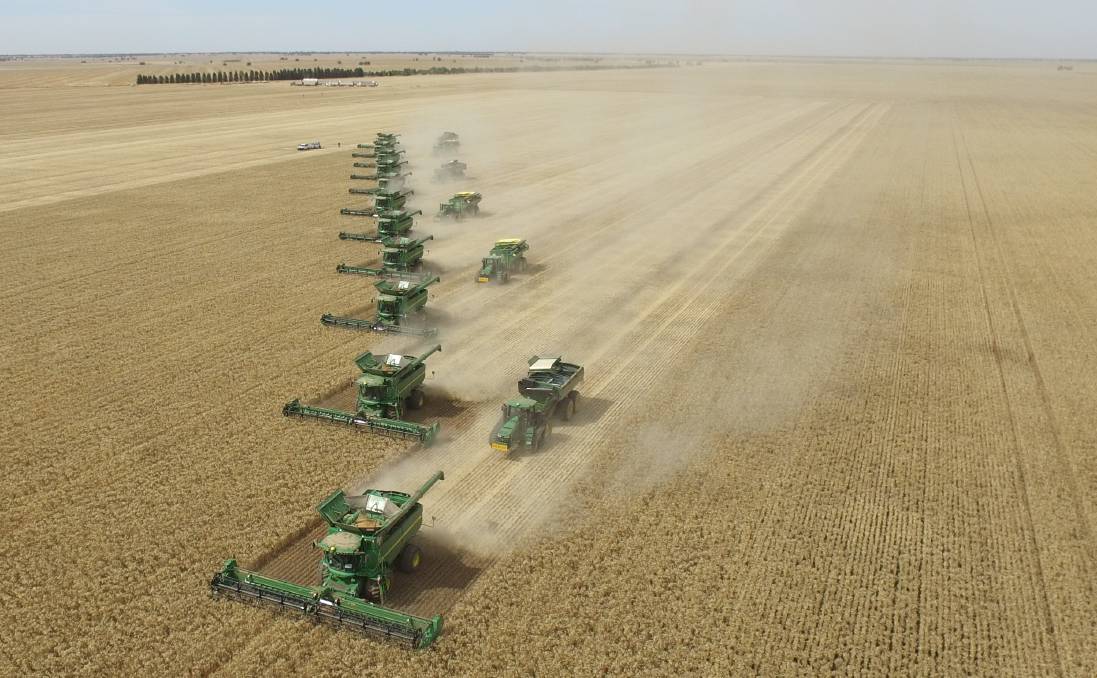 The 105,000 hectare Lawson Grains cropping business in Western Australia and NSW is looking for a new owner.

After a bumper season, Macquarie Bank is to sell its massive 10-year-old Lawson Grains business spanning 105,000 hectares of country in Western Australia and NSW.

The 10-property aggregation produced more than 250,000 tonnes of cereal, pulse and oilseed crops last year after a notable jump in production from its operations in NSW, particularly in the Central West near Forbes and North West around Moree.

A formal marketing program to promote the sale locally and internationally will start next week through recently established agribusiness agency Land Agribusiness Water and Development (LAWD).

Included in the offer will be the company's Albury-based management and technical team in southern NSW which are part of a permanent staff of about 55 across the country.

The sale will also include a big machinery fleet which is deployed to farm and harvest 90,500 hectares of cropping area.

Macquarie has a "strong preference" for the entire portfolio to be sold as one operation, but no potential price estimate has been flagged.

Lawson Grains is promoted as one of Australia's leading corporate grain farmers with its assets strategically diversified across multiple climate zones.

"The sale represents an opportunity to acquire a significant row cropping farming portfolio uniquely scaled and diversified," the company said.

"Performance is driven by a strong operating company with a demonstrable track record which also provides a platform for growth."

In the following four years Lawson acquired more than 70 full-sized properties and partial holdings to establish its current dryland farming footprint of four aggregations in NSW and six in WA.

Although no sale timeframe has been set, Macquarie believes the current seasonal conditions and operational improvements achieved across the business in the past eight years made now a good time for a new owner to take over.

A new investor would be able to take full advantage of, and expand, a portfolio which boasted strongly improving yield performances and soil health.

The farming company believed its focus on greater use of microbial initiatives to help soil biology promised to significantly help productivity in coming seasons, too.

Although it was too early to predict potential yields for the 2021 winter crop, soil moisture conditions across its NSW holdings were good and the company's southern WA grain belt had also benefited from an early season burst of useful rain in recent weeks.

Other Lawson Grains aggregations in WA are Wongan in the Northern Wheatbelt region, with 10,770ha of arable land, and the nearby St Leonards at Wongan Hills; Jerry South near Jerramungup in the state's south, and Gunnadoo in the Albany port zone which has a total arable area of 11,259ha.

Other NSW holdings are based on the Uah aggregation near Forbes, covering 10,550ha; Grassmere near Urana, spanning 10,052ha of arable area, and Borambil near Rand covering 8270ha.