The Colorado Cattlemen's Association has countered the March 20 MeatOut Day with its own Meat In Day, writes Ken Wilcock. 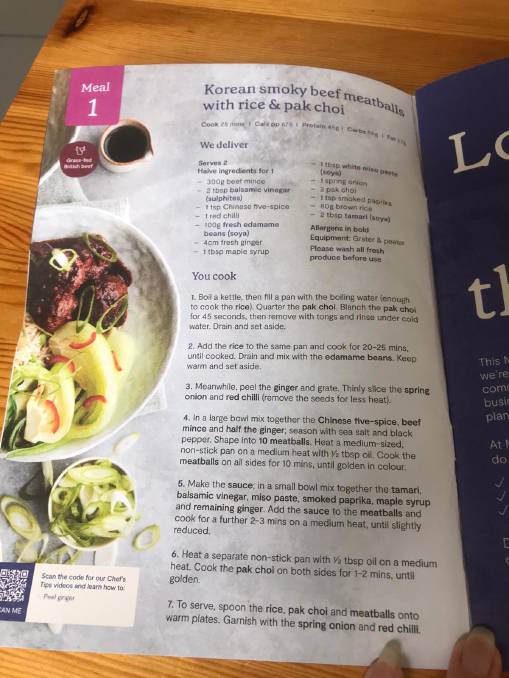 CONVENIENCE: With strict COVID-19 restrictions in the UK, here has been a surge in home delivery of food items like this Mindful Chef dinner box and recipe.

A FORTNIGHT ago, this column brought the story of a highly placed French official banning meat from school lunch programs.

His claim that it was necessary to go to a fixed menu that excluded meat in order to better observe physical distancing rules under COVID was derided by farmers who considered that the official's Green Party political beliefs and agenda were behind the move.

About the same time in the United States, Governor of the State of Colorado, Jared Polis, proclaimed March 20, 2021 as MeatOut Day.

The day, which was started in 1985 by the Farm Animals Rights Movement, is described as the world's largest grassroots campaign dedicated to removing meat from our plates.

While in this instance the declaration has no legislative standing, the ranching sector was nevertheless incensed at a state official's involvement in what it saw as an ill-founded attack on Colorado's cattle industry, a major component of the state's agricultural economic base.

But like the French farmers whose protest actions sparked a major political row at national government level, the Colorado Cattlemen's Association decided that action was needed to counter the misinformation at the heart of the MeatOut movement.

They threw their support behind a 'Meat In' movement, a coordinated initiative by restaurants, grocery stores and other meat-industry related businesses to directly support the livestock industry through promotion, advocacy and factual information on meat production and animal products.

In a direct affront to the MeatOut Day proclamation, their message instead for March 20 is to meet in a restaurant and order your favourite meat dish, meet your family and friends for a meal featuring meat.

It will be interesting to see, on balance, how Colorado consumers react to the countervailing MeatOut/MeatIn messages on March 20.

Strong support one way or the other may either encourage public officials to become more prominent in their support of Green idealism or to reconsider the wisdom of impartiality in such matters.

WITH control measures against COVID-19 affecting global travel, my Europe-based correspondent has not been anywhere interesting of late and I have been unable to provide postcard glimpses of what is happening in some of the more diverse places around the world with beef at the consumer level in terms of markets, retail and foodservice activity.

What is apparent, however, is the day-to-day misery of having to queue outside London's supermarkets in cold, wet weather in order to gain entry to a Sainsbury's or Tesco's for food essentials. The number of people inside the shop at any given time is strictly controlled and the queues seem to take forever to move.

Unlike Australia where shop awnings cover the footpath, there are usually no shop awnings in the UK and people queuing in the streets are exposed to the elements.

Little wonder then that there has been a surge in home delivery of food items.

A popular theme in this space is the recipe box.

Mindful Chef claims to be the UK's highest rated with their unmistakable bright blue cardboard carton.

Prices vary depending on the recipes chosen but a two-person box starts at around £5 (AU$9) per person per portion.

Naturally Mindful Chef is not alone in this initiative.

Gousto, another British-based venture provides a similar service differentiated by their bright red delivery box and there is also the German-based HelloFresh with their plain cardboard cartons enlightened with their green logo.

Generally the meals rate very well for quality and taste and of course the convenience factor.

However as my correspondent pointed out, it will be interesting to see whether the popularity of these recipe kits remains after the lockdown provisions are eased and the warmer weather arrives.

ONE to two inches in supply areas had livestock managers scrambling this week to shuffle cattle in order to maintain kill rosters.

But that looks to be about the extent of the impact of this current weather event as there is little indication so far that the rain is likely to be widespread enough or heavy enough to really interrupt supply.

In fact as recently as last Friday one of the majors dropped 10c/kg off grid rates in response to the increasing strength of the supply pipeline.

In the south, the published grid for Wagga showed a 10c/kg drop last week for ox and cow bringing them to 665 and 600c respectively.

Naracoorte on the other hand remained unchanged at 675 and 610c.

In the physical markets, Wagga on Monday lined up 800 head of mostly good heavyweight cows but according to the report not all processors were active and price fell by 7c.

In dressed-weight equivalent terms that worked out to around 585c/kg for the better finished types.

In contrast to the useful yarding of cows, there were only a hundred or so bullocks offered.

There was a better representation of heavy steers but the majority of these were at the lighter end of the range and went to feeders at considerably higher rates than processors were paying.

Seems the traditional bullock fatteners in southern NSW may be trending instead to turning off heavy feeders as has been happening in other renowned bullock fattening areas such as the Channel Country.

Meanwhile traders in the US imported beef market hit the pause button last week due to higher levels of domestic cow/bull slaughter and fresh lean beef prices stalling in consequence.

Australia's March volumes are currently 30 per cent behind last year's which in turn were down dramatically due to coronavirus.