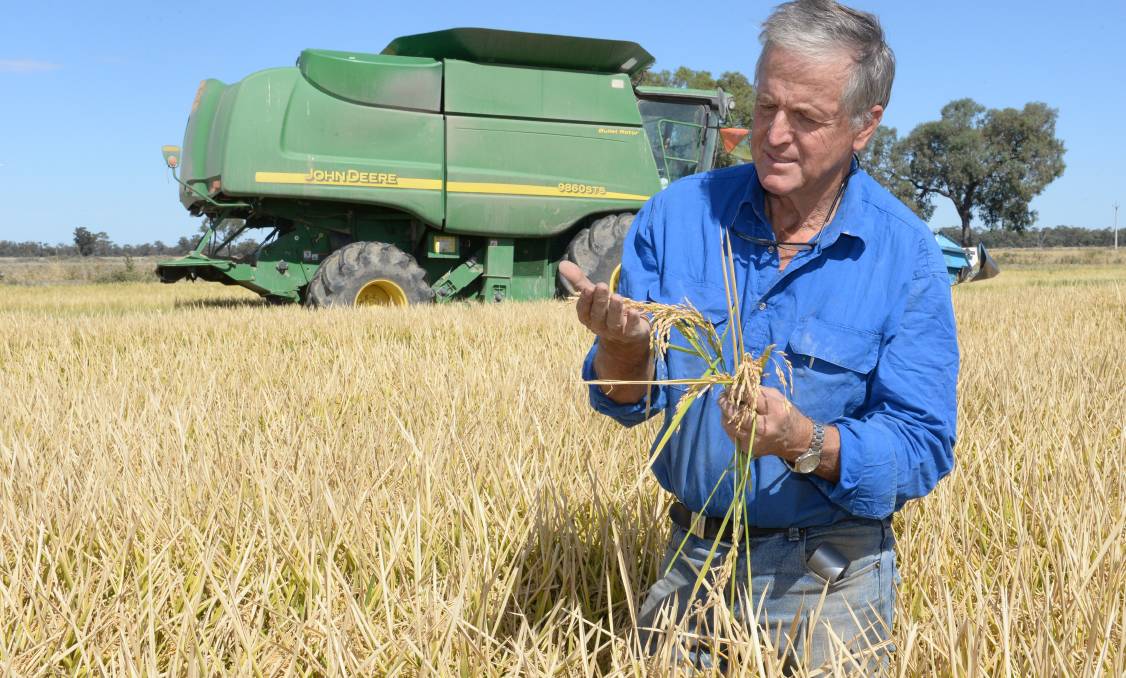 SunRice chairman Laurie Arthur whose family's Moulamein farming operation in the Murray Valley will start harvesting about 630 hectares of rice this month.

The southern NSW-based global agribusiness prides itself on its farmer-built foundations and an ability to balance farm sector interests with achieving solid returns for its non-grower B-class shareholders.

However, grower numbers have been squeezed by drought, water allocation reforms and rising competition for irrigation water in SunRice's southern NSW home turf.

Those who regularly grow enough rice to qualify as A-class shareholders have halved in number in the past decade.

Just 558 active farmers now hold single A-class shares - and that was after the board agreed not to redeem any shares when drought forced many to forego rice growing in recent years, slashing Australia's total production to just 45,000 tonnes in 2020.

A proposal to growers last week recommended allocating a base A-class share to all producers delivering a minimum 50t in their first year and 200t over four years.

At present A-class shareholders must produce 200t over just two years to keep their shares.

Additionally, the new structure would offer an extra "production" share to those harvesting at least 400t in the first year and a rolling average of 1600t over a four-year period.

Active A-class shareholders must also own 3000 B-class shares, which under the restructure would increase to 4000 if growers wanted an extra A-class production share.

Based on normalised rice production trends and reasonable water availability in the next few years, company modelling suggested the number of A-class stock likely to be issued would rise to 700 or 800 if the structure changed.

Company chairman Laurie Arthur said any variation to share ownership rules would be considered at August's annual general meeting and needed at least 75 per cent support from those shareholders to proceed.

"Based on the feedback from grower meetings last week, the idea has overwhelming support," he said.

"Our growers do appreciate they carry a lot of responsibility in having control and ownership of a significant Australian company."

The proposal aimed to avoid A-class shareholder power shrinking to an unrealistically small base which might potentially see a majority of growers unduly influenced to make major changes to the company's control.

"A-class shareholders elect a majority of board directors and have the ability to alter our constitution, which makes it very important for us to have a healthy representation of growers with a commitment to rice production making those decisions," Mr Arthur said

In 2010 when Spanish company Ebro Foods unsuccessfully attempted to buy SunRice, it made an uninvited offer of $50,000 each for growers' A-class shares.

I think it will benefit B-class shareholders, too, because the new structure would encourage production, which means we'll have more Australian rice to sell - Laurie Arthur, SunRice

The proposal did not unfairly discriminate between large and small growers, and would have no impact on B-class shares or shareholders.

"In fact, I think it will benefit B-class shareholders, too, because the new structure would encourage production, which means we'll have more Australian rice to sell," he said.

"We need consistent volumes to maintain our position in global markets.

"It's no way to build a premium market position when you disappear off the scene for a few years because you don't grow enough crop to sell."

After a significant improvement in water availability, particularly in the Murrumbidgee Valley, southern NSW growers are just starting to strip what is expected to be more than 450,000t of rice.

While the harvest will still be well below 2017's 800,000t or even the 1.1m tonne crop of 2013, it represented a big rebound from the past two seasons which set records for being the smallest in the company's 70-year history.

However, Mr Arthur conceded current water allocation reforms meant it was unlikely SunRice would see another 1m tonne crop from the Riverina and Murray Valley "in the foreseeable future".

Meanwhile, current global rice prices are on the rise, with US competition in the medium grain market likely to shrink because of drought in California.

The long grain market has been steadily climbing for about six months, now nearing the price spike peak recorded early in the coronavirus pandemic.

However, SunRice was cautious about over-promising its likely pool payments for the 2021.

Growers will be initially paid $390/t for medium grain, with pool payments in the next 12 months potentially lifting the 2021 crop's value to $450/t, at this stage.