PROFIT PERFORMANCE: Fonterra Australia managing director René Dedoncker says the Australian arm's performance enables it to prove it is here to stay and can support farmers.

Fonterra's Australian business delivered $NZ32 million in profit to the company in the first half of the year.

Fonterra's Australian business delivered $NZ32 million in profit to the company in the first half of the year.

The company revealed an absolute number for the whole Australian business for the first time in Wednesday's results, following a change in the business structure more than a year ago.

But the Australian profit result was down 14 per cent on the same time last year, due to reduced sales in the ingredients channel.

Fonterra said this channel had been impacted by the challenging trade conditions including China trade relations, contraction of the daigou channel and shipping delays.

The company's overall results pointed to a lift in underlying profit.

The reported profit after tax of $NZ391 million was down 22pc on the previous year, but the previous year's figures had included gains from the sale of DFE Pharma and Foodspring, which the company offloaded as part of its NZ first strategy.

This year's normalised profit after tax of $NZ418 million was up 43pc on the previous year.

The Asia Pacific region, including Australia, delivered a 9pc increase.

But earnings in the rest of the world - the company's AMENA division - were down 7pc.

Fonterra Australia managing director René Dedoncker said the reporting of the Australian business as a whole was a "nice evolution of our business" that improved transparency.

The $NZ32 million in profit enabled the Australian business to prove that it was profitable, was here to stay and could support farmers.

This had enabled the company to deliver a step up and make a profit for shareholders.

Mr Dedoncker said the profit had been achieved on the back of a strong performance in the consumer business and a rebound in the food service business, which had offset challenges in the nutritionals business.

The nutritionals business had been hard hit by problems with the daigou channel drying up because of reduced international travel, overlaid by the shipping industry being in turmoil.

Fonterra's nutritional business is based on supplying base product to manufacturers of paediatric products, such as infant formula, that are primarily shipped to China.

"Those customers are still contracted to us and we still have partnerships with them, it is simply that we can't move some of this product at the moment," he said.

"We will continue to partner with them - but until airlines start flying again and borders open up we are in this position unfortunately."

"We are working with government to support an improved level of relationship - it needs to have the right amount of tension but it certainly has been challenging for all exporters to China," he said.

Mr Dedoncker said Fonterra's Australian business did not have a significant exposure to the China market, apart from nutritionals.

Ongoing free trade discussions with India and other parts of North Asia would also help to open up alternative markets. 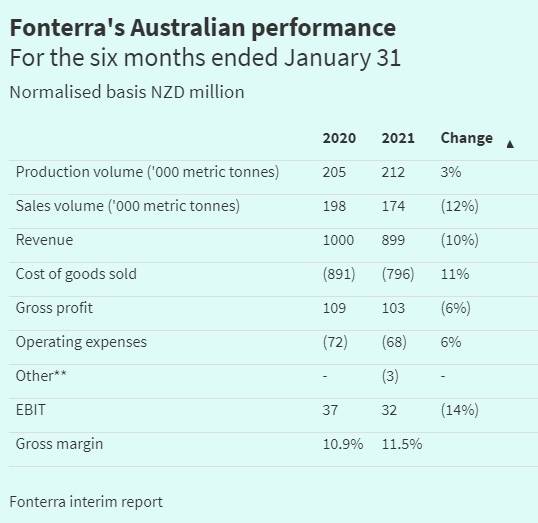 Mr Dedoncker said the company's Australian milk supply had stabilised this year, in part due to suppliers now being contracted to the company following the introduction of the mandatory Dairy Code of Conduct.

"We are operating this year at 1.4 billion litres of milk and that's the same as last year," he said

"That's what we need to run this business, it's what's driving that profit outcome and the farmgate milk price."

Mr Dedoncker said Wednesday's farmgate milk price step up followed a stabilisation in foreign exchange rates and a steep rise in commodity prices in the past two months.

"So that has enabled Fonterra to lift its milk price to $6.53 and still maintain a solid profit result," he said.

The company is also seeing a strong rebound in the food service industry post COVID.

"What we are seeing is that the food service industry is starting to reopen and that rebound is happening at an accelerating rate," he said.

Retail sales, which boomed during COVID, are also holding at the elevated level.

"I think what we are seeing is we are still cooking for ourselves and playing Masterchef at home more often than we used to, but when we go out, we are happy to spend a bit more money because we are not travelling overseas," Mr Dedoncker said.

"So I think we are getting the benefit of both at the moment."

An example of that impact was that Western Star butter sales were up 25pc on the previous year.