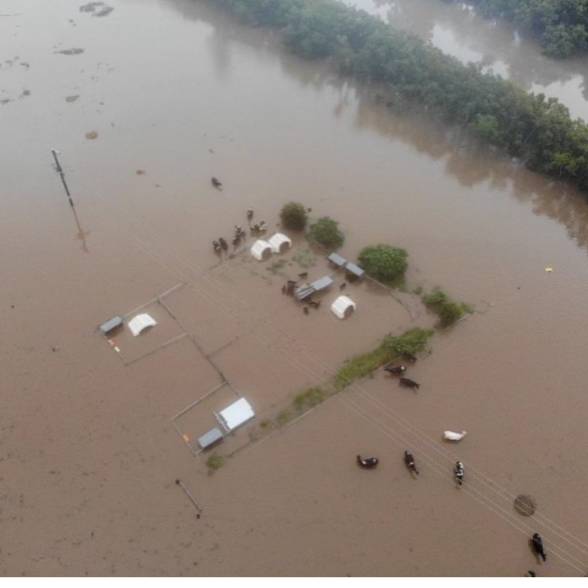 "It's devastating watching your hard work float past you," is what dairy farmer Rachel Nicholson said as many parts of the Mid North Coast have been declared a natural disaster due to flooding

Mrs Nicholson and her husband Sam moved their dairy herd to highest ground on their property at Jones Island north of Taree on Friday as floodwater started to rise.

"We put them on our highest ground but at the end of he day it was not high enough, they are still walking in water up to their bellies," she said.

Like so many farmers on the Mid North Coast they did not expect the water to rise so quick.

"We've been on this farm for five years and have not experienced a flood, we didn't expect this, it came up so quickly," Mrs Nicholson said.

"The whole farm is under water, we are an island." 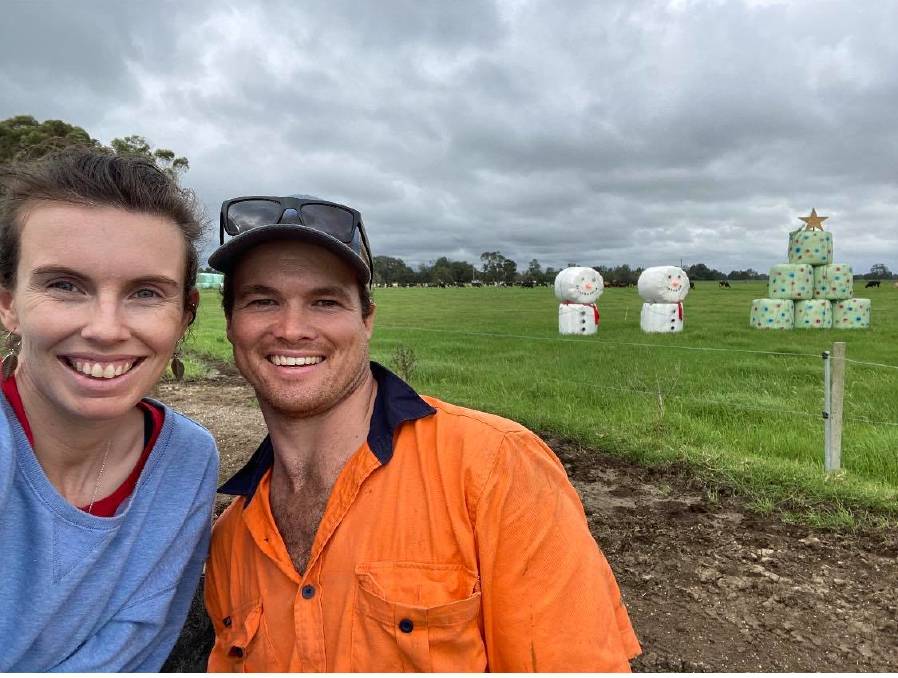 Rachel and Sam Nicholson from Taree at their property around Christmas. Photo: Rachel Nicholson

Mrs Nicholson said they had been trapped at their home since Friday and her husband was currently on a kayak trying to move the herd closer to the house so they could feed them.

"It's just devastating, it's really devastating, its so hard to see what the whole community is going through right now and to be stuck and not able to do anything is heartbreaking," she said.

She said they had lost up to 500 bales of silage they had in preparation for winter and as well as a number of calves.

"We won't know how many we have lost until we get them back to the house," she said. 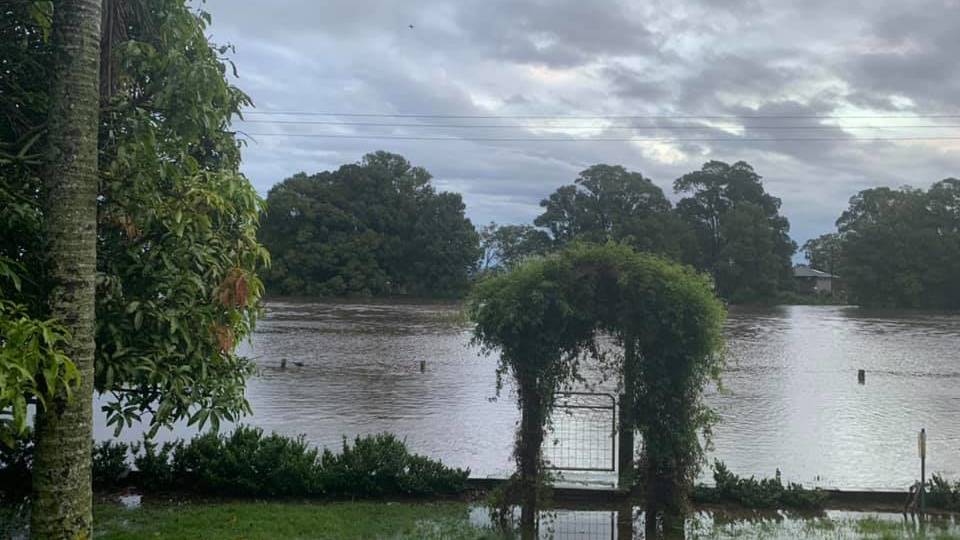 The veiw from Sue and Brett McGinn's property on Belmore River where the river has come across the banks onto the road, which is now under water. Photo: Sue McGinn

Further north, Kempsey Shire councillor Sue McGinn who has been dairying in the region for 26 years said this flood had been unlike any other they had seen in that time because the water rose so quickly.

"Every flood is different and this is one is probably the scariest we've had in the past 26 years because it's unknown," Mrs McGinn said.

"This is an unknown as we seem to getting more inundation from Port Macquarie Hasting Rivers coming in from the back of the farm while the front of our farm is filling up from Belmore River at the front, which is a tributary of Macleay River.

"We now have an increasingly narrow piece of ground.

"All our cattle are being hand-fed at the moment and thankfully we haven't missed a milking yet but we are watching everything closely hour by hour.

"I have also been watching closely the Women in Dairy Facebook page and see people who are worse off than us.

"Sure it's dire here but there is always someone who is doing it worse and and some have lost infrastructure, cattle, calves and silage.

"And some are watching their feed wash down their river ways." 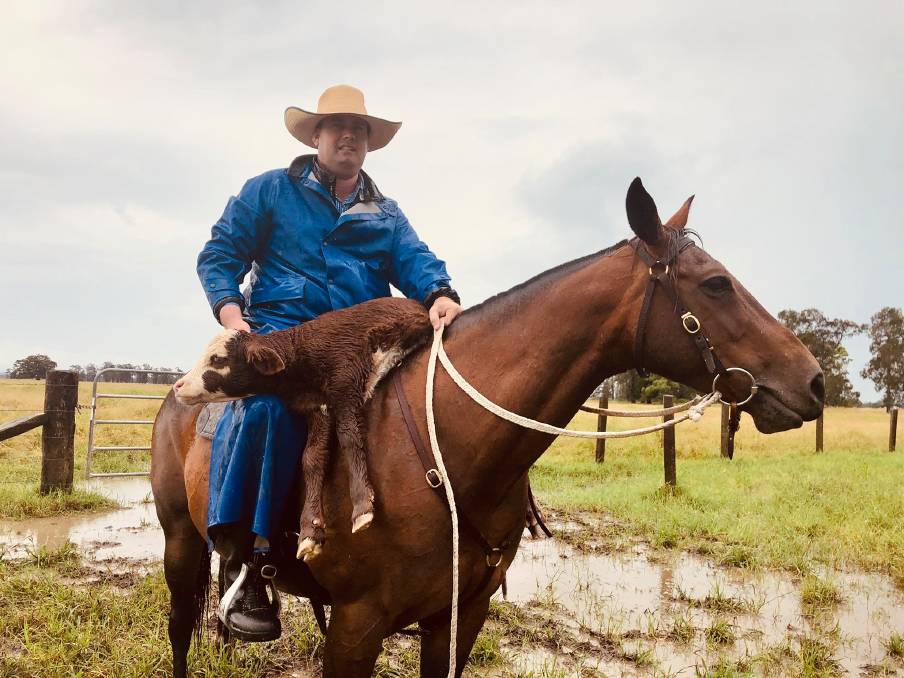 Laurie Argue from Kempsey Stock and Land saved a calf from floodwater while shifting cattle at Clybucca north of Kempsey. Photo: Samantha Townsend

Kempsey Stock and Land agent Laurie Argue said beef producers had been shifting cattle since Wednesday after more than 500mm of rain fell on the region and the Macleay River reached moderate flood levels.

"People are still shifting cattle to higher ground as we speak as they are predicting more rain of up to 150mm," Mr Argue said.

'The lower Macleay is well and truly under water and there are plenty of people who are isolated down river as well as up river towards Bellbrook as bridges are closed and some roads have washed away.

"There is still a lot of unknown because there has been 185mm of rain at Willawarrin west of us that as to come down the Macleay River and we are still getting coastal showers."

Mr Argue said there had been hardly any reprieve from the rain in five days except for a couple of hours on Saturday. 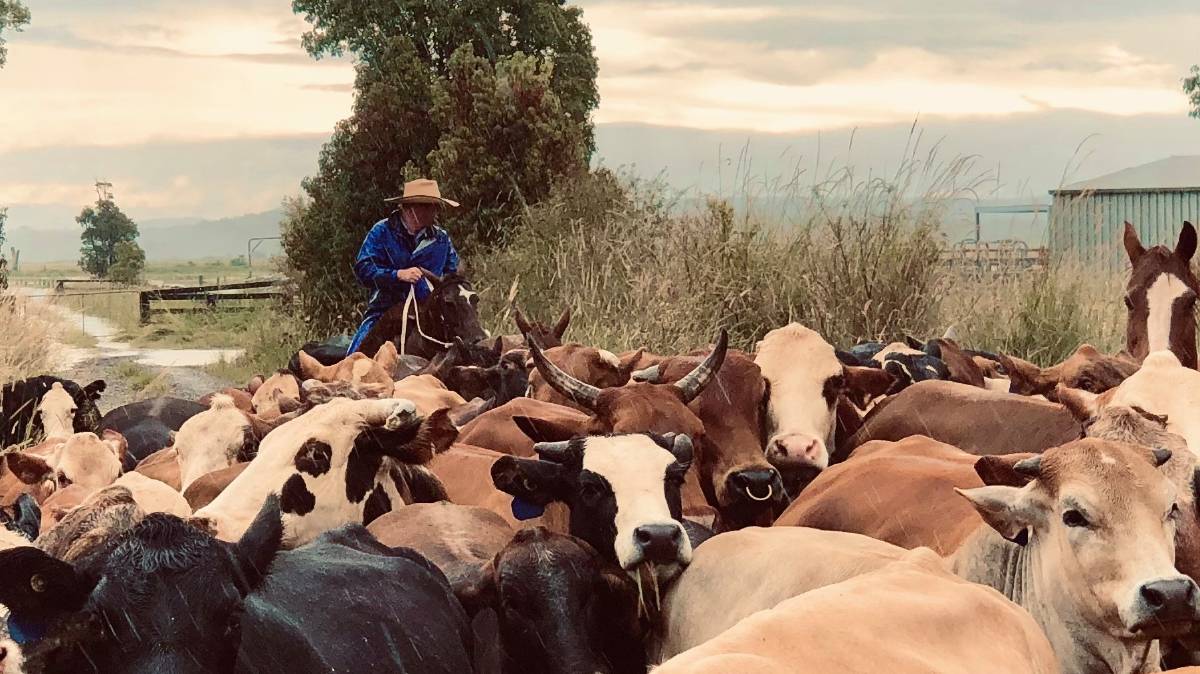 The Facebook page Mid North Coast horse/livestock flood recovery, which has more than 2000 members, has been established to "post any livestock dead of alive to help owners locate or have piece of mind".

The posts show images of cattle that have been found on the Mid North Coast that have been washed up on beaches, found walking in caravan parks or the front yards of people's homes.