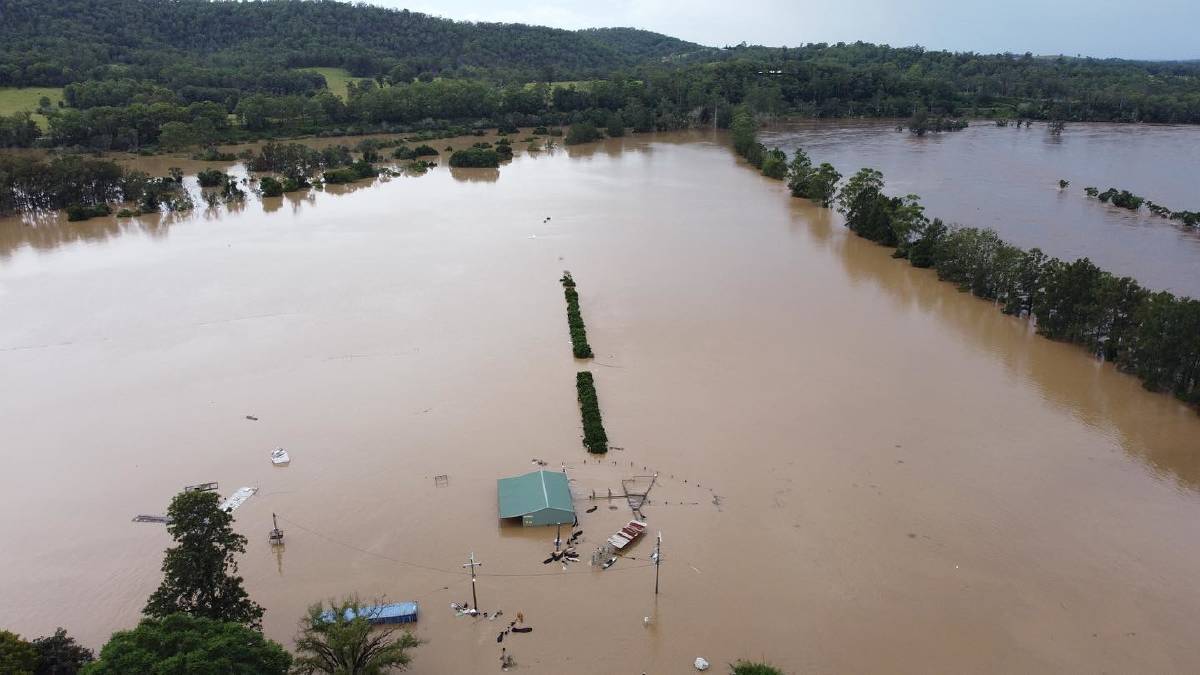 A flooded farm at Wingham. Photo by Billy Callaghan @Billy C drones. Wingham has set the biggest rain total for a three-day period since 1967.

A number of Upper Western, North-West and Central-West towns have been told to brace for heavy rain and possible riverine flooding later Monday and on Tuesday, with some western catchments set to overflow.

It's possible up to 100mm could fall in the next 24 hours in areas from Cobar to Coonamble and stretching south to Dubbo as moist tropical air and an inland trough drifts down from the north-west, meeting up with a rain system that has already sent a deluge on to the NSW coast.

Already almost 100mm had fallen in just 12 hours at the far outback town of Tibooburra by noon Monday. Its long-term average for March is just 22mm.

The Tuesday morning total was 144mm over the past two days. Water racing aorund the Country Corner Store at Tibooburra in far oiutbak NSW this morning with 120mm of rain recorded and more on the way. Photo courtesy of Vicki Jackson.

Meantime, the Insurance Council of Australia has declared the rain event in NSW a "catastrophe".

A severe weather warning has been issued by the Bureau of Meteorology for "heavy rain, likely leading to flash flooding, to develop in parts of the Upper Western, Central Tablelands, North West Slopes and Plains, and Central West Slopes and Plains forecast districts from this morning (Monday), becoming more likely in the afternoon and evening. There is an enhanced risk with any thunderstorm activity."

Already some central-west and north-west towns have received close to 100mm in the last week. Coming down at Tibooburra. Photo courtesy of Family Hotel, Michelle.

Weatherzone says areas such as Cobar could see 25mm to 50mm today, and the same tomorrow. Bourke which has already recorded 30mm in the last 24 hours to 9am Monday, could see the same amount of rain. Some places such as Coonamble have already had more than 80mm in the last week.

We could see some places on the coast with over 1000mm of rain by the end of this episode. - Esteban Abellan, Weatherzone forecaster

Related: How the NSW floods unfolded Parts of the mid-NSW North Coast is set for another round of drenching and major flooding as the system reintensifies. Thousands of people in that area have been evacuated and many have lost everything including stock.

Mr Abellan said it was possible by the end of this rain event some areas on the North Coast will have received over 1000mm - a metre of rain. "That is quite incredible", he said.

To add to the misery of people in flood zones who have been forced to evacuate, another 150-200mm may fall on those critical areas such as the Hastings and Manning rivers at Kempsey and Port Macquarie in the next two days. Kempsey may even see its flood levee overrun by floodwaters.

Flooding is also extensive in the Nepean-Hawkesbury area and Windsor has been cut off, with the Windsor bridge flooded over. Hundreds of people have been evacuated in the Sydney basin as Warragamba Dam continues to spill massive amounts of water.

The NSW Government has issued a total of 34 (plus extra four this morning) Natural Disaster Declarations over the last 48 hours to ensure immediate support reaches communities across the State affected by the floods and storms.

The assistance now available is one of a series of funding packages that will be triggered by the Government as the impacts of the floods are assessed:

* help for eligible people whose homes or belongings have been damaged;

The rain event is likely to clear on Wednesday.

Meantime the Insurance Council of Australia has declared the rain event a catastrophe.

The ICA's Catastrophe Declaration serves to escalate and prioritise the insurance industry's response for affected policyholders.

Under the Catastrophe declaration:

. Claims from affected policyholders will be given priority by insurers

. Claims will be triaged to direct urgent assistance to the worst-affected property owners

The ICA's disaster hotline has been activated - 1800 734 621 - to assist policyholders if they are uncertain of their insurance details or have general inquiries about the claims process. (Please note: this is not a claims lodgement service.), it said ina statement.

"An industry taskforce has been established to identify and address issues arising from this catastrophe. Insurers will continue to monitor the situation in south-east Queensland to determine if a Catastrophe Declaration is required for that area.

Andrew Hall, CEO, Insurance Council of Australia said: "It's too early to understand the extent of the damage to property in affected areas and to estimate the insurance damage bill, however insurers have received over 5,000 claims in the past few days.

"The insurance industry has made this Catastrophe Declaration to activate services and support for affected homeowners and businesses and reassure them that their insurer is there to help.

"As many areas are currently inaccessible due to floodwater, insurers are expecting further claims in coming days as emergency services allow residents to return to their properties to examine the extent of their damage and losses."

"The Bureau of Meteorology have contacted NSW Farmers warning of a forecast system moving through Central Australia and into NSW may cause localised flooding, particularly in where soil profiles are near full," Mr Arkle said.

"The extent of flood damage won't be known for some time but we want to make sure we're doing everything we can to assist farmers to recover from the extensive damage."

"Today we have launched our flood appeal through our natural disaster fund."

"The Fund provides financial assistance, goods or services, to primary producers adversely affected by flooding to ensure that they can continue to operate their farms whilst they are dealing with or recovering from the Natural Disaster."

For more information or to donate, please visit www.nswfarmers.org.au/donate.