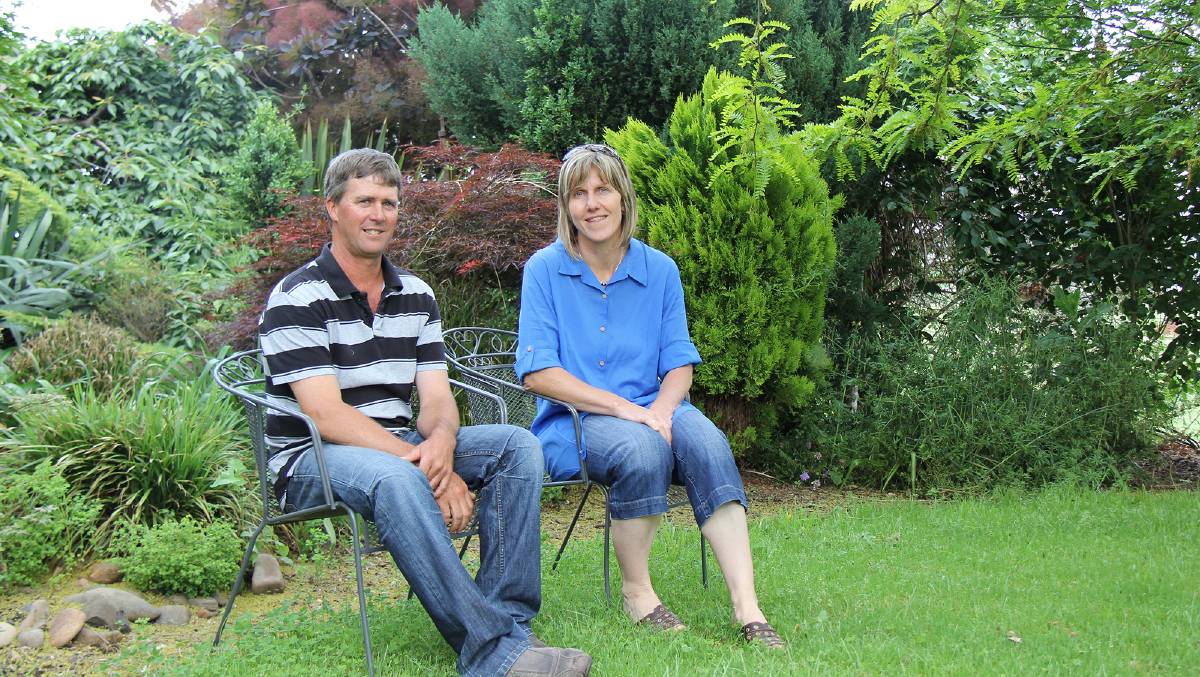 Rob and Maree Newton bowed to Rob's ongoing back issues when they dispersed their herd. Photo: Mud Media.

If there was ever to be an industry legacy to emerge from one of Australia's premier production Illawarra herds - it would have to be sires for the future.

If there was ever to be an industry legacy to emerge from one of Australia's premier production Illawarra herds - it would have to be sires for the future.

Ovensdale Illawarras was dispersed over three sales in 2018, 2019 and 2020 and it is a case in point. Owned by Rob and Maree Newton, Ovensdale found its home at the family's picturesque Whorouly property, near Myrtleford in Victoria.

If it wasn't for a degenerative back injury, 57-year-old Mr Newton would still be in the dairy.

In the final wash-up, 12 cows at Ovensdale achieved more than 100,000 litres of lifetime production, within a herd average of more than 9000 litres.

The Newtons didn't show cows - outside of the on-farm competitions - yet they won grand champion of the Victorian Red Cow On-Farm Challenge three out of four years (2009-2012).

Holstein and Jersey breeders attended all three stages of their dispersal and bought Illawarras. Those Ovensdale animals have continued to excel for their new owners.

The reigning International Dairy Week grand champion Illawarra is Ovensdale Pearl 534 - owned by the Queensland partnership of Henry and Bourke.

Ovensdale's influence is far from finished. From its deep maternal lines comes two young sires for the future - Scarlets Zumba and Tribulation - which appear set to impact across the entire industry.

Zumba is ready to rumble

MAIN COPY CONTINUES {Treeton Scarlets Zumba stands at ST Genetics and comes from Ovensdale's strongest maternal line - the Scarlet family. Scarlets Zumba is 79.69 per cent Illawarra and is out of Ovensdale Scarlet 255 EX92-4E STP, which was bought by the Williams family, in South Australia.

Behind Scarlets Zumba are 11 generations of cows with an average of 7.3 lactations per cow and a whopping production index average of 119 over all those lactations. 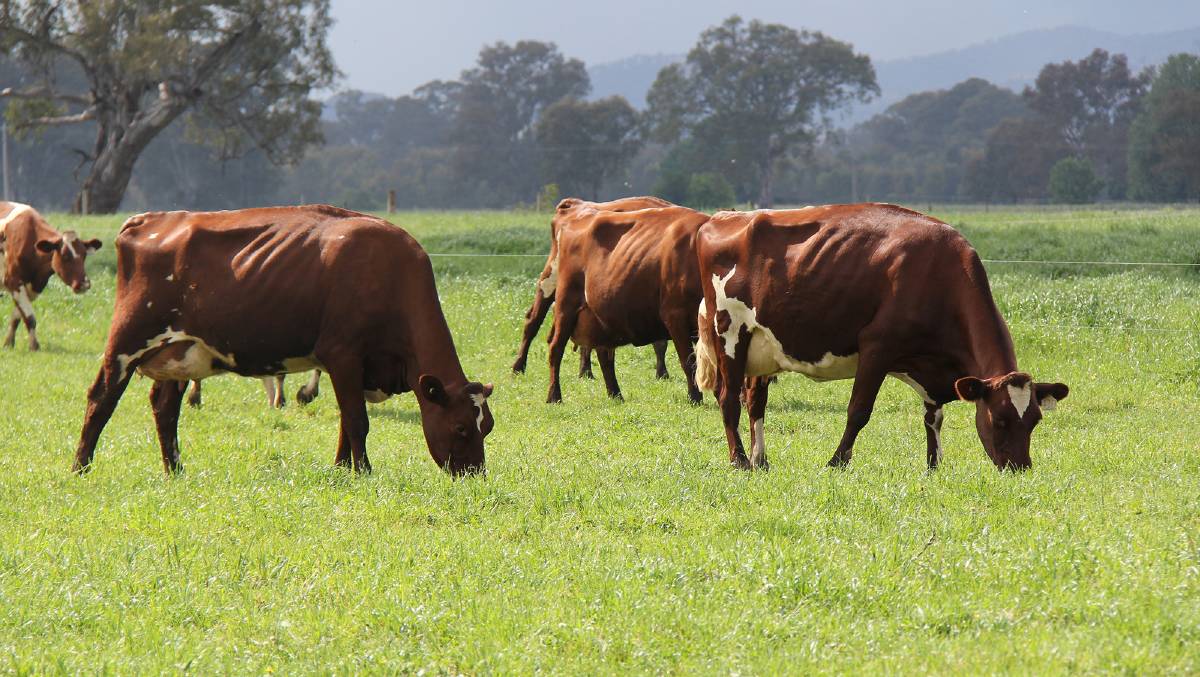 Production, fertility and longevity were a feature of the Ovensdale herd, and the sires chosen to take the breed forward honour that legacy. Photo: Mud Media.

In fact, the six cows behind Scarlets Zumba completed 48 lactations between them with an average of 11,450 litres, 382kg protein and 438kg of butterfat. Bringing that achievement further into focus is that those productions included two-year-old and final lactations when those cows were aged more than 10 years. It was all achieved predominantly on pasture. All were classified VG or EX.

Adding to Scarlets Zumba's appeal is that it is available in sexed semen and is an A2/A2 sire.

"The Scarlet line is our strongest. Fullstop," Mr Newton said.

Scarlet excels with black and whites

A maternal family member - which traces back to Scarlets Zumba through a direct link to its sixth dam - is the reigning champion cow in the Victorian Red Cow On-Farm Challenge, Ovensdale Scarlet 351. Scarlet 351 is now owned by Holstein breeders Philip, Samantha, Mikaela and Aiden Daniel, at Nathalia, in northern Victoria.

The cow milks in a 150-cow Holstein herd that is averaging 10,500 litres with 700kg milk solids in a fully housed compost barn. Philip Daniel says Scarlet fits in well.

"She is a great cow," he said. "She comes and goes from the dairy, and you just don't notice her. She milks equal to the black and whites, she fits into our housed system perfectly, and we have three daughters from her. We couldn't be happier with her."

Ovensdale Jenny's Tribute, or Tribulation on Agri-Gene's books, is 76.44pc Illawarra and was bred by Mr Newton.

What all that means is that Jenny 62 not only has superior production, it has type. And the cow carries a 5E behind its name. Every additional "E" is allowed to be considered only after they have another calf.

The four cows directly behind Tribulation averaged 9.5 lactations, and its fourth dam, Lemon Grove Jenny 13, brings in the famous Lemon Grove prefix. Jenny 13 was twice champion cow and twice reserve champion cow at the Shepparton National Dairy Show when it was tough to win. It completed 10 lactations with 2640kg lifetime fat.

It is also worth noting that Tribulation's sire Myrtleholme Mitch injects a shot from another outstanding type and production herd, owned by the Bourke family, who farm in the Gladfield valley, approximately 150km west of Brisbane.

In another nod to the longevity in this family, Tribulation's half-sister, Ovensdale Jenny 80 EX90 STP, was born 10 years before its half-brother. It peaked at 13,127 litres with 427kg protein and 485kg fat as a five-year-old, and finished in the top-five in the Victorian Red Cow On-Farm Challenge three out of five years. It completes three generations of EX and six lactations with a lifetime total of 62,910 litres.

"We retired Jenny 80 after our milking herd dispersal," Mr Newton said. "She had nothing left to prove. She's my pet and she'll stay here until the end.

"Actually, Between Lemon Grove Jenny 13 and Tribulation there are five generations, which are 47 years apart. Because the cows behind him have all done their nine and 10 lactations, and have been around for a long time. And, that spread of years truly shows the tremendous longevity in this family."

The philosophy behind Ovensdale's breeding

Mr Newton believed in some simple philosophies that paid the bills for his family.

They operated on a mostly pasture system, which was supported by hay and silage in addition to 6-9kg of grain a day, depending on the season.

"We just looked after the cows, and they looked after us," Mr Newton said. "I bred for cows that would produce for a long time, not blow out in the first lactation.

"That was my grand plan. Even the show-ring results, I never bred for that. I bred for long-lasting animals, and the on-farm show results were simply a by-product of that.

"I know Holsteins give a lot of milk, but the modern Illawarra has proven it can match the Holsteins for production, and I was too attached to the Illawarras' temperament, calving ease, and fertility.

"I believe the Illawarra's ease of calving is closely linked to their fertility. And, those qualities within the breed allowed me to have two four-week joining periods a year - and a lot less sleepless nights through calving."

He said he had full confidence in Scarlets Zumba and Tribulation and was looking forward to watching their impact.

"I do miss the cows, but these young sires keep my interest in the breed going," he said