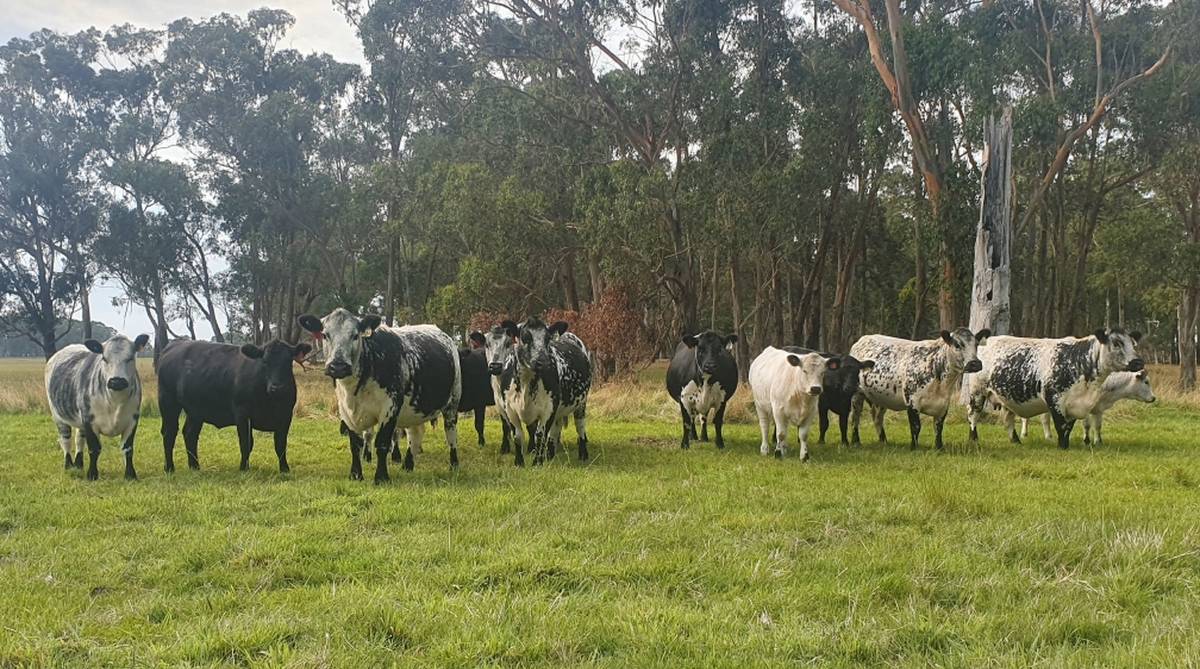 CONSISTENT QUALITY: Using Speckle Park genetics in both their dairy and beef herds has paid off for Mac and Debbie Jones, Ecklin South, with their Speckle Park-cross calves in high demand.

Speckle Park genetics are delivering top results for Mac and Debbie Jones, who can't keep up with demand for the quality calves produced in their dairy and beef operations at Ecklin South, near Terang, Vic.

Speckle Park genetics are delivering top results for Mac and Debbie Jones, who can't keep up with demand for the quality calves produced in their dairy and beef operations at Ecklin South, near Terang, Vic.

Trading as MACDEB Enterprises, the couple own a 214-hectare dairy farm, milking 500 cows twice daily, as well as a further 242ha which runs the replacement dairy heifers, a 70-head beef herd and produces the farms' annual silage and hay requirements.

Initially attracted to the breed due to their unique colouring, the couple decided to trial Speckle Park bulls in their dairy breeding program about seven years ago and continue to be impressed with their performance.

They now join Speckle Park bulls to all their dairy heifers and are gradually building up numbers of pure Speckle Park and Speckle Park F1 and F2-cross cows in their beef herd.

"I liked the look of the Speckle Parks and back then we were probably one of the first in this area to use them," Mr Jones said.

"We initially used Speckle Parks during our artificial insemination program in the dairy herd as back up bulls, and we were surprised at the interest in the Friesian/Speckle Park-cross calves.

"Instead of putting a Jersey over our replacement dairy heifers and producing a calf worth $30 a head, we are putting a Speckle Park bull over them and getting $300 a head at one week-old," he said.

"The cross has improved our cash flow and we can't keep up with the supply of calves."

In the past two years, the Joneses have been sourcing their Speckle Park genetics from the JAD stud, Yeoval, NSW, purchasing 10 pregnancy-tested-in-calf (PTIC) commercial Speckle Park heifers at the stud's first sale in 2019.

They then returned, buying six bulls at auction and out of the paddock, which are used across both the dairy and beef herds.

When selecting sires, the emphasis is on structural soundness, coat colour and low birthweight to improve ease of calving in their dairy heifers.

"We are putting the Speckle Park bulls over our maiden dairy heifers so we try and pick out low birthweight bulls because we don't want to knock the heifers around," Mr Jones said.

"Due to buyer demand, we also prefer to select whiter bulls, rather than the predominantly black bulls, as this produces a more coloured calf.

"If we've got a pen of calves for sale and someone comes, they'll select the more coloured calves over the black ones, they just seem to prefer them.

"We've also found the temperament of the Speckle Parks to be tremendous, they are really quiet and easy to handle."

With an average annual rainfall of more than 700 millimetres, both the dairy and beef herds are joined from late May onwards for an autumn calving, starting in mid-March.

Mr Jones said this ensures the calves are up and going before the weather gets too cold and wet.

"About 150 replacement dairy heifers are mated to the Speckle Parks."

The Joneses aim to turn off about 200 Friesian/Speckle Park-cross calves annually which are keenly sought by local, repeat buyers to be grown out.

In the beef herd, the Speckle Park-cross steer portion is sold at a target dressed weight of 220 kilograms, about 400kg liveweight, straight off their mothers at nine to 10 months of age.

Most of the vealers have been marketed to a local butcher in Terang.

Mr Jones also sold a draft on AuctionsPlus recently, receiving more than $1700 a head which he was very pleased with.

"I've been very impressed with how they grow out, we had a few Angus vealers at the start, and the growth rates of the Speckle Park-cross calves have been just as good or better," Mr Jones said.

"We are trying to boost the numbers of pure Speckle Parks and move away from the dairy cross more.

"Looking after the dairy cows is our number one priority and the beef operation is run separately.

"In the future we might look at increasing the beef herd numbers because labour is very difficult to find for milking cows."

Mr Jones has been retaining a selection of Speckle Park-cross beef heifers to build numbers, with a focus on temperament, structure and colour.

To maximise performance in both the dairy and beef enterprise, cow nutrition and health is a key production driver.

An intensive rotational grazing system is employed for the dairy cows and they are fed four kilograms of grain twice daily in the bails to maintain milk production and fertility. Vetch and cereal hay is also supplemented.

Mr Jones has taken an innovative approach to monitoring cow health and welfare, introducing individual collars fitted with software that can detect changes in cow activity, temperature and rumination.