Many had hoped for a silver lining out of the floods, but the mice plague is still active. 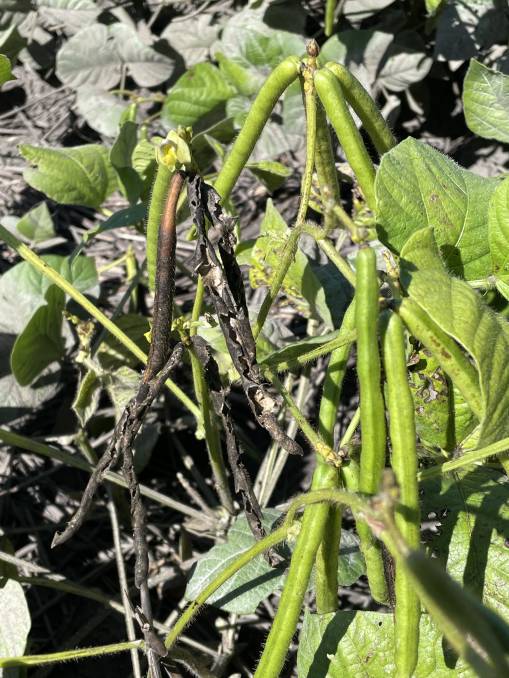 DAMAGE DONE: These mung bean pods at Moree are an example of the damage mice can cause. Photo: Tony Lockrey.

Last week's floods in Moree wiped out much of the mice population in the region, but unfortunately for farmers many still remain and will continue to breed.

The Mehi River rose to 10.38 metres last Thursday morning, and the hope was the mice plague would fall victim to the devastating weather event that caused several homes to become unliveable.

However, local agronomist Tony Lockrey has revealed that while the rain had an impact, the weather that followed floods was not harsh enough to significantly affect the stronger, older mice.

"I can tell you that the numbers have certainly been knocked around by the flood but there's still plenty of mice in there," he said.

The office of Adam Marshall recently stated they would be monitoring how bad the situation was following the floods, and make a decision on what action was required then.

According to Mr Lockrey, who works for AMPS Agribusiness, government intervention such as bait rebates will still be needed given the danger remaining mice pose to late summer crops.

"I think it will be [needed] in areas definitely, we had a lot of mice and most of the adults I'd suggest would've survived," he stated.

"We've lost potentially the next generation but it doesn't take them long to breed and we're still a month out from planting."

One positive is that Mr Lockrey has revealed there are not major concerns over locusts in the region at this stage.

He has not seen them aggregating and laying eggs and is yet to witness significant waves of new hatchlings.