All the results from the schools interbreed competition of the meat and dual purpose sheep section of Sydney Royal Show. A CORRIEDALE ewe from Trinity Catholic College, Goulburn, has swept the mat during the schools interbreed competition of the meat and dual prupose breeds section of the Sydney Royal Show.

A long wool ewe in the two tooth or over class, Trinity tag 166 was continually described by Mr Mansbridge during the judging this morning as the complete package.

"The ewes here are excellent examples of what I look for and what industry looks for," he said.

"The Corriedale ewe I particularly admire a lot for her growth for age, width of body, barrel and hind quarter. She has the balance, and I love the type, brightness and consistency of her wool.

"She is a well-grown, productive ewe with a beautiful fleece... Her width of stance is what elevated her above the other ewes today."

Going back to the Prell family's Gundowringa bloodlines out of Crookwell, the top-ewe was one of two exhibits successful shown by the Trinity school.

With two sheep, and five students, Trinity received first and second in class and went on to win the pair of ewes.

"We (Trinity) started showing with Richard and Jane Carter of Billi Gaboo stud, then we also helped Tony Manchester of Roseville stud at the next show and then Rick of Glen Esk, and it has flowed on from there," Trinity agriculture teacher Rachel Smith said.

"The Corriedale breed is so good with the kids, and so a good relationship has been built with the school and many studs."

The top ewe will go on to the NSW Sheep Show at Dubbo in May. Bred by Sue McGoldrick of Bimbadeen Park and Coolcappa stud, Coonabarabran, the tag 39 ram was the winner of the short wool ram showing milk teeth only.

Going back to Yentrac, Vic bloodlines of the sire's side, and out of one of Ms McGoldrick's own ewes that stems from Malley Park blood, the top school ram was also shown at local shows.

"Binnaway he was champion ram and supreme interbreed ram, and at Barradine he was second and reserve as a bare shorn ram," she said.

"His sire always produces smooth, well muscled rams... We will take this ram home and use or sell him."

When commenting on the ram during his grand champion ram selection, Mr Mansbridge said he couldn't go past the Poll Dorset for his carcase and what he offers industry.

"For carcase sheep, you wouldn't be able to find one much better," he said.

"He is a ram in tune with what we look for in industry, and as we move towards a payment system baed on yield and fat cover, this ram will take the industry forward."

Square through the hindquarter, Mr Mansbridge said he carried a lot of meat through the loin, had a true Dorset head, great cover and a beautiful barrel.

"He suits industry, he will put muscle, doability and yield in lambs," he said.

When splitting the grand champion ewe and ram, Mr Mansbridge's decision came down to wanting to see the ram stronger through his pasterns.

"If you put the ram over the ewe it would equal a tremendous lamb... it was a tough decision, but I went with the ewe as I would like to see the ram stronger in his pasterns," he said.

Reserve champion ram was a Corriedale ram from the Badgally stud at St Gregory's College, Campbelltown. 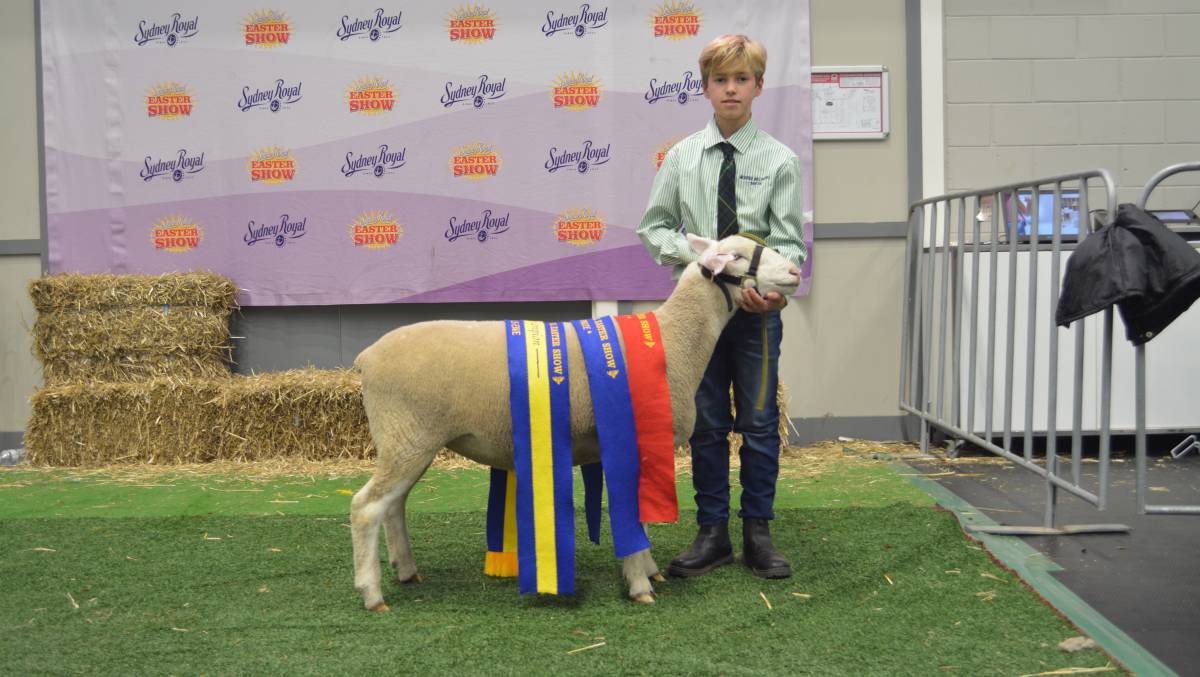 Macarthur Anglican School exhibited the reserve champion ewe. A White Suffolk ewe lamb out of the short wool ewe showing milk teeth only class, it was commended for its balance and structure throughout.

"For her age the reserve is a well developed muscling and width of loin which equals yield and suits what industry is looking for," he said.