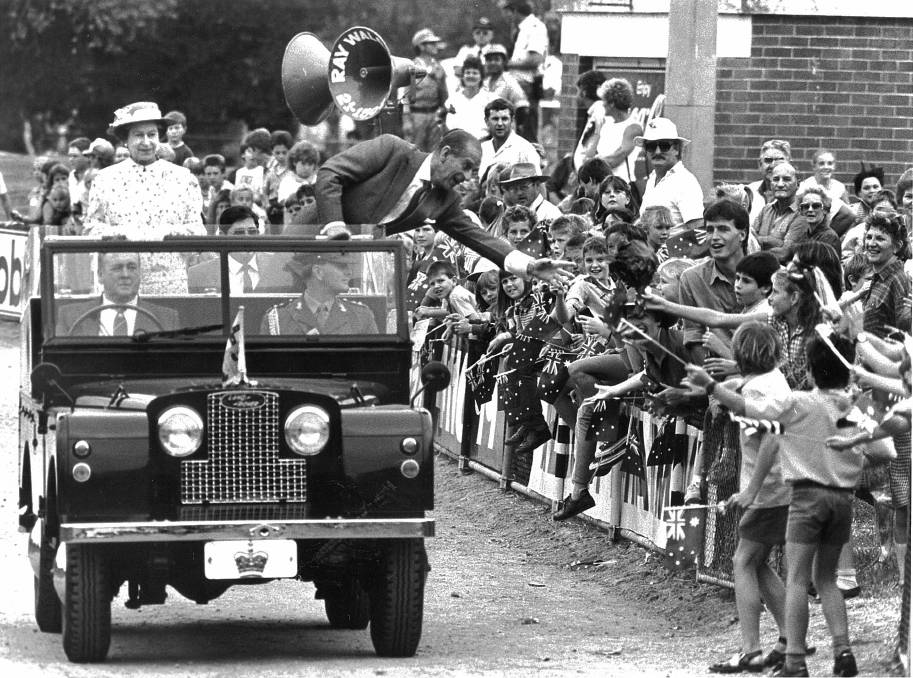 Tens of thousands of Albury-Wodonga residents gathered in 1988 to celebrate Prince Philip and Queen Elizabeth II's visit to Albury.

On May 5, 1988, then-Albury mayor John Roach and then-NSW Premier Nick Greiner hosted the royal couple who were presented with an oil painting by famed landscape artist Colin Angus.

Nine years ago Mr Roach recounted the Duke of Edinburgh Prince Philip's reaction to the painting.

"We'd gone down to Eldorado to get a Colin Angus painting of a rural scene to present to the Queen,'' Mr Roach told The Border Mail.

"It was a nice picture with a rundown old farm shed and the Duke looked at it and asked me "Is that the town hall?''

The Queen was also gifted flowers from Laos migrants and a coathanger from a Yackandandah woman.

During the much-hyped 1988 visit more than 10,000 children held a display for the royal couple at Albury Sportsground.

The Queen and Duke drove in an open-top vehicle through the crowd, with Prince Philip reaching out to touch the outstretched hands of children lining the route, and visited the Cumberoona, however there was not enough water for it to sail.

Reports from The Border Mail after the visit, recounted "while on the Cumberoona talking to captain Frank Tucker, the Queen saw canoeist Marg Baker paddle past several times while the Duke waved to a girl on a horse on the bank opposite."

The royal couple also attended a private lunch hosted by the city for 400 guests and walked the civic square.

It was during this 1988 visit Mr Roach revealed Albury would change the name of Civic Square to Queen Elizabeth II Square, now commonly refereed to as QEII Square.

Prior to the May 1988 Albury visit, the Queen and Prince Philip visited Benalla and Wagga in 1954.

Prince Philip also visited Bandiana on May 20, 1986, to present the Prince Philip Banner to the Royal Australian Electrical and Mechanical Engineers' Corps.