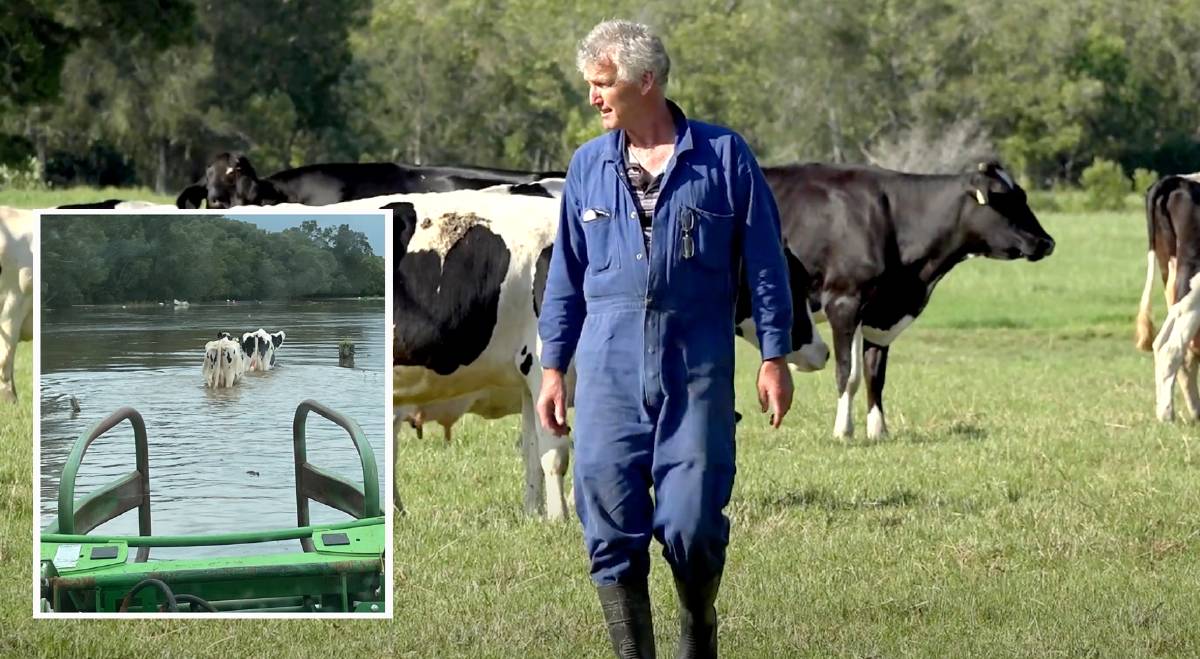 Despite being battered by floods, Julian Biega is looking to the future and rebuilding his herd.

Three years ago dairy farmer Julian Biega was milking 220 cows producing around 5000 litres of milk a day at his picturesque Manning Valley property.

Drought hit, followed by bushfires, which saw his herd reduced to 130. Then he copped a battering by the floods leaving just 105 standing.

Today he milked 30 cows that produced 600 litres of milk. It was the first milk since the floods that was able to be sent away and bottled.

"Only a few of us will have a cup of tea from that but it was a relief to get milk away," he said.

Of the remaining cows, 31 are being treated for infection, nine will "retire to hospitality" and the rest will not be milked again but will instead be put on pasture for the next 12 months.

Today much of his property is now mud and still can't be accessed.

During the floods, Mr Biega had to walk two kilometres from his house to the dairy, much of it waist deep in water to make sure his herd was safe.

"We didn't milk for four days and the consequences of not being milked is infection," Mr Biega said.

"When we could milk we couldn't dump it on the ground, it had to go back into the vat because the sludge pump and wash down hose wasn't working."

To come back online, it has been a massive task.

Mr Biega had to go through all his cows to see which ones were fit to milk and who wouldn't make the grade.

On Tuesday he took 31 samples from the infected cows to be tested and cultured to find out what bacteria each had so the appropriate medication could be implemented.

"We have identified six different bacteria on the farm from the floods, and not one penicillin can treat all of them so you have to mix and match the penicillin to the cow to fight the infection," he said.

It will take another two weeks before those cows can go back on the vat to be milked.

In the meantime, Mr Biega is looking to the future. He organised a helicopter to sow the highest point of his farm once the cattle were off it.

"It was the only way to get on the paddock without trashing it or bogging it up with tractors," he said.

"Like all dairy farmers, we need to start preparing for the winter season and planting pasture...it's already starting to germinate."

Mr Biega also has plans to rebuild his herd. He will try and buy more cows so he can be back milking 100 cows by May.

"Why do I keep doing it? I get asked that a lot, I suppose I have a sense of humour as you can't make a latte from Coca-Cola, it tastes horrible," he said.

"It's a lifestyle, I do this by choice, I like what I do, and yes there are downsides but there are also positives and you need to stay focused on the positives."

WOOLWORTHS will pay Manning Valley dairy farmers like Julian Biega (pictured left) for milk lost in the recent floods to help them recover from the impact, just 18 months after their properties were threatened by bushfires.

As flooding swept the NSW North Coast last week, Manning Valley dairy farmers saw their properties cut off, and in some instances, under a few feet of water.

Woolworths partners with seven dairies in the Manning Valley for its Farmers' Own label in NSW, all of which were affected including Mr Biega's farm.

While some farmers continued to milk despite water logged properties, a number were forced to discard the milk that couldn't be stored when road access to their properties was lost, or couldn't milk at all while their dairies were flooded.

To support its farmers in the immediate aftermath as they recover from the operational and personal strain brought by the floods, Woolworths will pay them for the milk they discarded or lost during the flood to ensure continuity of income over this challenging time.

Woolworths dairy category manage Denise Cotter said they were deeply invested in the partnerships with the Farmers' Own suppliers in the Manning Valley.

"We hope this practical support offers our farmers some additional certainty as the flood water recedes and they take stock of the impact in the weeks ahead," she said.

The story How a dairy rebuilds after floods first appeared on The Land.