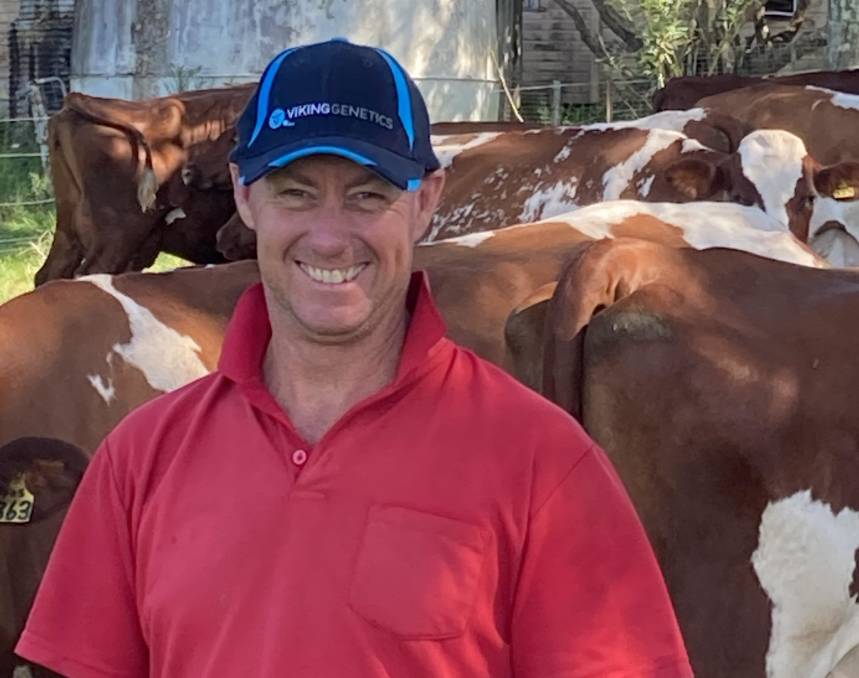 UPBEAT: Northern NSW farmer Warren Gallagher is upbeat about the future of the dairy industry in his region.

The last surviving dairy farmer in Clunes in northern New South Wales says the region is ripe for a dairy revival.

The last surviving dairy farmer in Clunes in northern New South Wales says the region is ripe for a dairy revival.

Back in the day, every hundred-acre block in the Clunes region in the Byron hinterland was home to a dairy farm, but today Warren Gallagher has to drive 15 minutes north and 10 minutes south-west to find another dairy.

Mr Gallagher, a third-generation farmer whose family has been on the land for 104 years, said things had never been better thanks to a change to his breeding program, great weather conditions and a good price for his milk.

"It's comfortably the best year I've had in my 31 years on the farm," he said.

"Because our breeding program with Viking Genetics has been so successful, these days we're not relying on cull cows to make money - milk is actually making money.

"Everyone should be milking cows up here - it's a licence to print money at the moment."

Mr Gallagher said the price of land deterred many dairy farmers but the recent change in fortune should prompt landholders to reconsider dairy as an option.

"There are opportunities to convert; it should be a strong consideration," he said.

He said the region had a good climate and land for dairy and he was happy with the price he received from processor Norco.

"It's a good grass-growing climate with excellent and very reliable rainfall averaging 1600 milliemtres over the past 30 years," he said.

"It's always good here for dairy farming but you make your own luck."

Mr Gallagher helped to make his own luck by changing his herd and introducing Viking Red genetics about five years ago.

It had been an Illawarra herd to the mid-1990s when some Red Holsteins were introduced for genetic diversification and more milk.

The switch bought the desired additional milk with the farm reaching its goal of 8000-litre average lactation but fertility and mastitis problems emerged.

"Up to 30 per cent had calving problems, and feet issues were becoming too common but I visited Terry Blasches' farm at Casino and saw they were starting to get some good uniform type and longevity into the cows from using mostly Viking Red genetics," he said.

Mr Gallagher saw the solution to his problems and his first Reds were born in May 2015, using Viking Red and other genetics.

"I learnt that Viking Red was working best for my farm; it over-performed compared to any other genetics I've ever used," he said.

"The bulls I selected at the time already had 5000-6000 daughters on the ground so they had proven success."

Now milking 200 with 33 heifers due to calve in May - 50 cows in the herd are by Viking Genetics bull Foske and 35 by Cigar.

"They are a significant feature and have absolutely improved the herd," Mr Gallagher said.

Production is similar to five years ago, but the components have increased, cell count dropped and herd health has improved significantly.

"I've treated two cows for mastitis in the past 12 months, that's significantly less than where we were five years ago," he said.

The news keeps getting better with Mr Gallagher having his best season for production.

The reliability of the herd's calving and the longevity of the cows has allowed Mr Gallagher to reduce his heifer breeding program.

"I join a set number of cows to Viking Genetics with the aim of breeding 40 heifers a year, which is just over half what I used to breed," he said.

"That's purely based on their reliability; I know they are going to stay in the herd and their longevity is a huge bonus.

"If you can get reliability into your bulls and know they're going to stay in the herd, it equals more milking ground which is where you make your money."

Mr Gallagher said the future was looking bright, with the genetic changes starting to shine through in the herd.

"Once I had enough in the herd to see a true influence it was nice to look at them here rather than on the truck," he said.