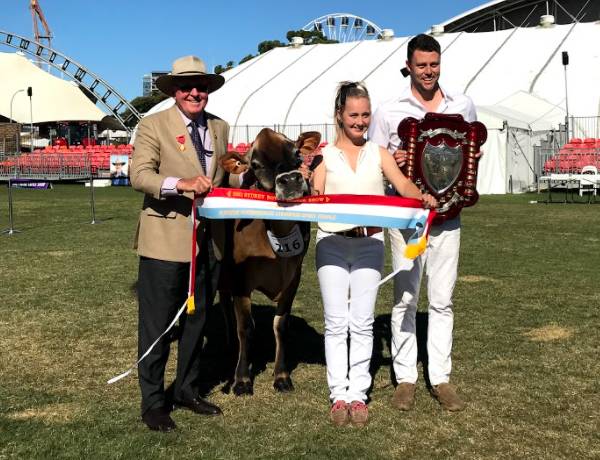 Australia has a new top Jersey herd after Brookbora Jerseys reached the number one spot in the April 2021 ABV release.

Australia has a new top Jersey herd after Brookbora Jerseys reached the number one spot in the April 2021 ABV release.

It is the first time Brookbora Jerseys, owned by Robert and Sandra Bacon at Tennyson in northern Victoria, has claimed Australia's number one title.

Brookbora rose to the top with a BPI of 191, up 23 from the December 2020 proof where they were in third place.

After several years in the top spot, Con and Michelle Glennen's White Star Jerseys at Noorat in south-west Victoria slipped to number two herd, despite increasing their BPI by 6 to 176.

John and Margaret Cockerell at Warrain Jerseys in Numurkah were also big movers, climbing to number three with their herd BPI rising 27 points to 166 BPI.

A large proportion of their herd being genomic tested since December 2020 added to their figures.

Robert Bacon said it was pleasing to reach the top during a time when the Jersey breed continues to improve.

"I think Jerseys in general are getting better and more consistent," he said.

"We've been in the top handful for a few years and were top in the TWI before it ended and top for health traits, but this is our first time to top the BPI."

However, he can't really explain the huge jump.

"We haven't changed anything. Our aim has always been to breed commercially viable, consistent cows with good confirmation, to enjoy milking them for a long time."

"Con was the first on the phone to congratulate us and said it couldn't happen to a better herd," he added.

Warrain Jerseys has had individual cows in the top rankings but this is the first time the herd has been in the top three.

"We've been sitting in the top 10 for a fair while but to suddenly jump up to number three was a bit of a surprise," Mrs Cockerell said.

"With assistance from Amy Wright who does our mating management, we pick bulls that we think are going to improve our herd. We've had high production years around 7000-7500 litres average so we're now looking to improve parts of the cow's appearance, feet and legs and udder," she said.

"We expect a lot of milk out of the cows so we want to avoid them wearing out too quickly. The longer you can have her productive, the better the return. It's not just about milk in the vat, it's having a healthy cow capable of doing it."

The top young genomic heifer in the April ABV release was Kings Ville Bella 66 with a BPI of 381. The Matt daughter is owned by Rob and Kerrie Anderson at Kings Ville Jerseys in Gippsland.

AnchorMr Anderson said Kings Ville Bella 66 had a pedigree to match her BPI, making her marketable into the future.

"She's a young calf that is ranked highly with great potential and she's from a cow family that already has a bull in AI, King Ville Bashful - P," Mr Anderson said.

Matt daughters dominate the top list with Broadlin Ilagay 3791 with a BPI of 370 from the stud of Lisa and Lynton Broad equal second with Kings Ville Matt Eran, also from the Kings Ville Stud.

"Reaching number one herd is a tremendous achievement that takes many years of committed breeding," he said.

"Be it the top index herd, breeding quality bulls for AI programs or winning in the show ring, Brookbora is doing it all with distinction."

Mr Barrett also highlighted the influence of Matt, which was the number one proven bull.

"Matt is certainly leaving his mark on the Australian Jersey cow," he said.

"His proof continues to get stronger as do the quality of his progeny."