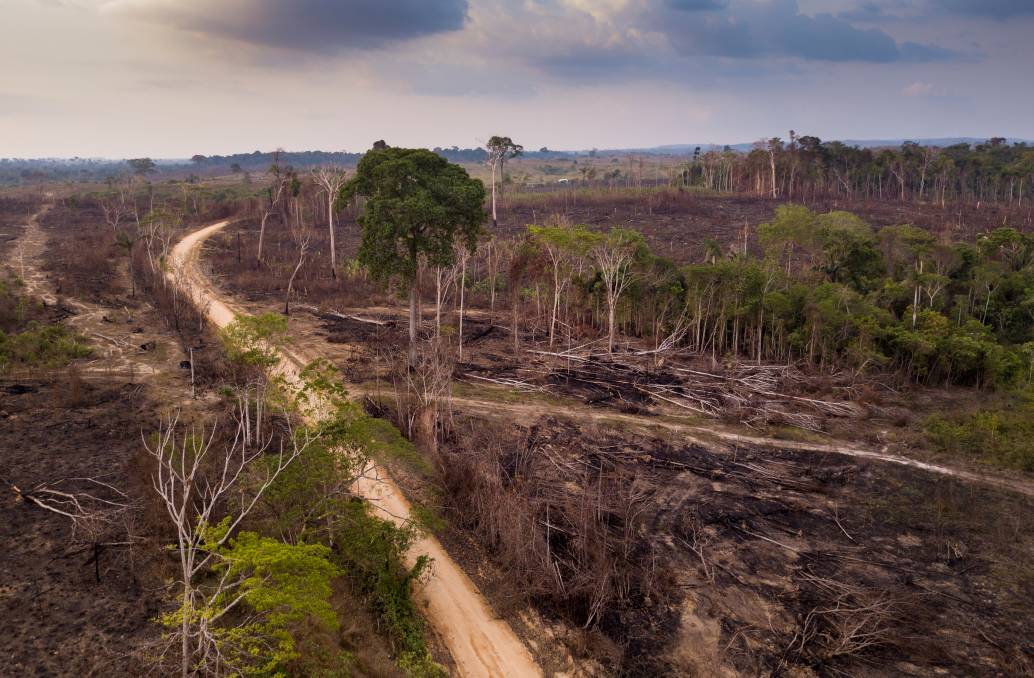 ENVIRONMENTAL DAMAGE: Aerial view of deforestation in the Amazon rainforest in Brazil, where trees have been cut and burned on an illegal dirt road to open land for agriculture and livestock. Picture: Shutterstock

LAST September, JBS SA, one of the world's largest meat processors, announced a supply-chain monitoring program that it claimed would target the indirect cattle suppliers who are accused of illegal land clearing and associated practices which are resulting in deforestation in the Amazon.

That project called Pecuària Transparente or Transparent Livestock achieved an important milestone last week with the announcement by JBS of commencement of voluntary registration of producers.

Previously, JBS and other major Brazilian processors monitored their immediate direct suppliers to help ensure they were not dealing with farmers who had been involved in illegal land clearing, use of areas embargoed by IBAMA (Brazilian Institute of Environment and Renewable Natural Resources), invasion of indigenous lands and slave labour.

But producers further down the supply chain were not caught in these checks which meant that cattle from illegally cleared country could be sold to farms with a clean environmental record for on-sale to processors such as JBS.

Now those first-line JBS suppliers can list the farms that in turn supply to them and have those farms evaluated under the same criteria that applies to themselves.

Founded in 2017, the first target of their expertise was beef with a system that categorised cattle carcases and assigned a barcode or QR code to each allowing encapsulation of information such as which farm the cow came from, where it was slaughtered etc.

Being an open system, this allowed other accredited partners to come on to the platform.

Critical to the process is CNA (Brazilian Confederation of Agriculture and Livestock) which, under authorisation, provides validation checks on the list of suppliers.

Another Brazilian AgTech company, Agrotools, is used on the platform to conduct the socio-environmental compliance analysis.

That information in turn goes to the JBS first-line supplier who can then take steps to mitigate any risk exposure should that be needed or help their second-line suppliers regularise (i.e. make legal and official) their environmental situations where necessary.

JBS itself will not have access to sensitive information, only to the consolidated analysis of its suppliers. Blockchain technology ensures the confidentiality of third-party information.

JBS has also accepted that it needs to be proactive in bringing illegal and undesirable activity under control and to this end has launched 'Green Offices' at 13 of its processing locations throughout Brazil.

On its web page, JBS says Green Offices were created to support their suppliers in the process of environmental regularisation of their properties.

To do this they are offering free legal and environmental advice through specialised consultancies for resolution of the environmental liabilities of the farms.

Each office has specialists to deal with the producers, collect information and forward the cases to partner consultancies offering specialised technical assistance.

There is no doubt that there is considerable environmental and institutional pressure on Brazilian companies such as JBS to address the Amazon issues and greenhouse gas emissions generally.

In response JBS has made a commitment to zero the balance of its greenhouse gas emissions across its entire diversified value chain by reducing the intensity of direct and indirect emissions and offsetting all residual emissions by 2040 (Net Zero 2040).

The 2040 deadline applies to the company's beef cattle supply chain including its second-line suppliers to be free of illegal deforestation in the Amazon Biome.

Deadline for other biomes in Brazil is 2030.

The Amazon supply-chain monitoring program is therefore critical to the Net Zero 2040 commitment and the reason why the company has an engagement strategy to accelerate the registration of producers who comply with socio-environmental standards.

By the end of the year the company expects to have registered producers representing a total turnover of one million animals on the platform.

All JBS suppliers are expected to join the platform by the end of 2025.

As covered in an article in this column last month, the EU is looking to Brazil to improve and have in place robust anti-deforestation policies and for meaningful engagement that demonstrates commitment on Brazil's part to implementation of the Paris Agreement before the EU can proceed with ratification of the EU-Mercosur Agreement.

That article concluded that this might be a tall ask of President Jair Bolsonaro's administration committed as it is to opening the Amazon to farming, mining and logging activity as a way of lifting the region out of poverty.

However it may be that the beef industry itself as illustrated by JBS' efforts to secure socio-environmental compliance in its supply-chain may hold the key to ratification of the Mercosur deal.

Rates on the move in south

FROSTS and drying conditions in parts of southern Australia may lead to a few more cattle coming forward in the weeks/months ahead but for now the supply picture down there is tight enough.

Bullocks and heavy cows at Wagga on Monday were both quoted dearer. There were only a couple of decks of bullocks but these reached 414c and averaged 394.

For the moment, grid rates from Queensland to southern NSW are unchanged but in SA both ox and cow jumped 40c/kg on Friday.

The Naracoorte grid is now well ahead of east-coast grids with four-tooth ox at 695c and heavy cow at 640.

If there are any numbers of heavyweight cattle to come out of the Channel Country, that will make it very hard for the south-east Qld works to get much of a look in.

Meanwhile in the Unites States, Steiner reported the imported lean beef market at a standstill after weeks of strong gains.

However consumer demand as Memorial Day approaches is expected to be strong and outlook remains positive.