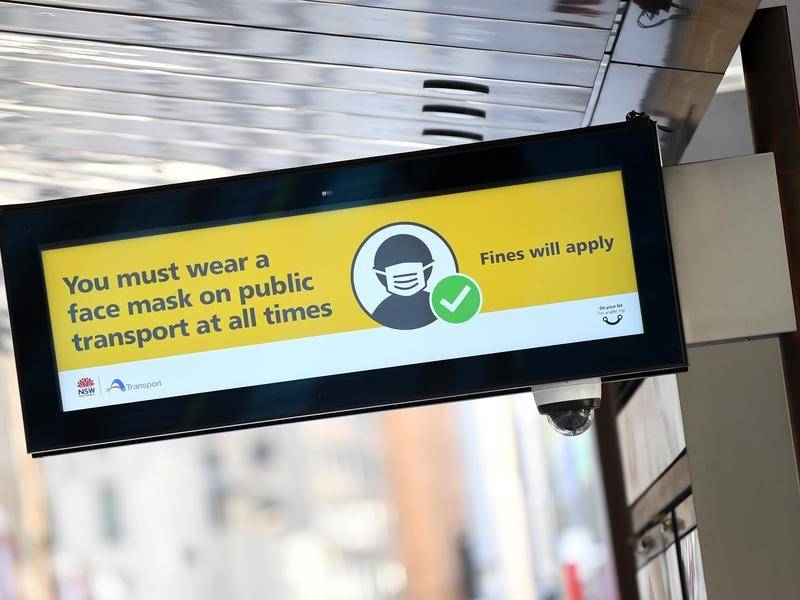 Greater Sydney residents are going back to wearing masks on public transport for three days.

A swathe of COVID-19 restrictions have been reimposed across the Greater Sydney area as health authorities hunt for the "missing link" between a coronavirus-p...

A swathe of COVID-19 restrictions have been reimposed across the Greater Sydney area as health authorities hunt for the "missing link" between a coronavirus-positive traveller in hotel quarantine and an infected Sydney man.

In Sydney, the Blue Mountains, the Central Coast and Illawarra, masks will be compulsory at all public indoor venues and on public transport from 5pm on Thursday while visitors in homes will be capped at 20.

Singing or dancing indoors is banned with an exception for weddings where numbers on the dancefloor will be limited to 20.

Drinkers in bars must be seated and just two visitors will be allowed for residents in aged care homes.

The restrictions will remain in place until at least Monday morning but Premier Gladys Berejiklian reiterated businesses should remain open over the Mother's Day weekend.

"We know for sure that someone with the virus has been moving around the community and doesn't know they have it and may have infected many other people ... what we're doing is a very precautionary response," she said on Thursday.

"Unlike other premiers, we're not shutting down the city."

"If you've got a booking (this weekend), go to the booking, enjoy Mother's Day, do what you would normally do," Ms Berejiklian said.

On the issue of state border closures she said: "We're not shutting down anything in NSW, so other premiers shouldn't even think about that."

NSW Health confirmed a man in his 50s from Sydney's east who was diagnosed with COVID-19 on Wednesday had infected his wife but no other close contacts so far.

His case has forced NSW Treasurer Dominic Perrottet into self-isolation after he attended the same Sydney CBD restaurant as the coronavirus-positive man.

The treasurer has already taken a COVID-19 test and returned a negative result, however he says he will complete a self-isolation period of 14 days.

Authorities are yet to determine how the Sydney man picked up the same COVID-19 strain as a man who travelled from the US who is currently in hotel quarantine. There is no link between the pair.

No positive virus tests have been recorded in hotel quarantine workers so far.

"If we'd been able to identify the case in between, the missing link or links, of course we would've taken a different approach," Ms Berejiklian said.

"But we know for a fact there's at least one person, if not more, walking around with the virus, not knowing they have it or potentially having attended many events and venues ... this is a proportionate response."

NSW Health believes the unvaccinated Sydney man who was diagnosed on Wednesday has been infectious since last Friday.

A list of nearly 20 venues of concern has been compiled which includes a number of barbecue stores in Silverwater, Annandale and Casula, a meat store in Bondi Junction and a petrol station in Mascot.

Sydney Roosters NRL players and Sydney Swans AFL players have also been sent for COVID-19 tests and staff have been told to stay home after the virus-positive man visited Azure Cafe in Moore Park, less than 100 metres from the Roosters' headquarters.

People who have attended the listed venues at various times between Friday and Tuesday should get tested and self-isolate until they receive further advice.

On Wednesday evening NSW Health reported that fragments of the virus had also been detected in the Marrickville sewage network in Sydney's inner west.

But they are yet to uncover any virus-positive cases in the area.