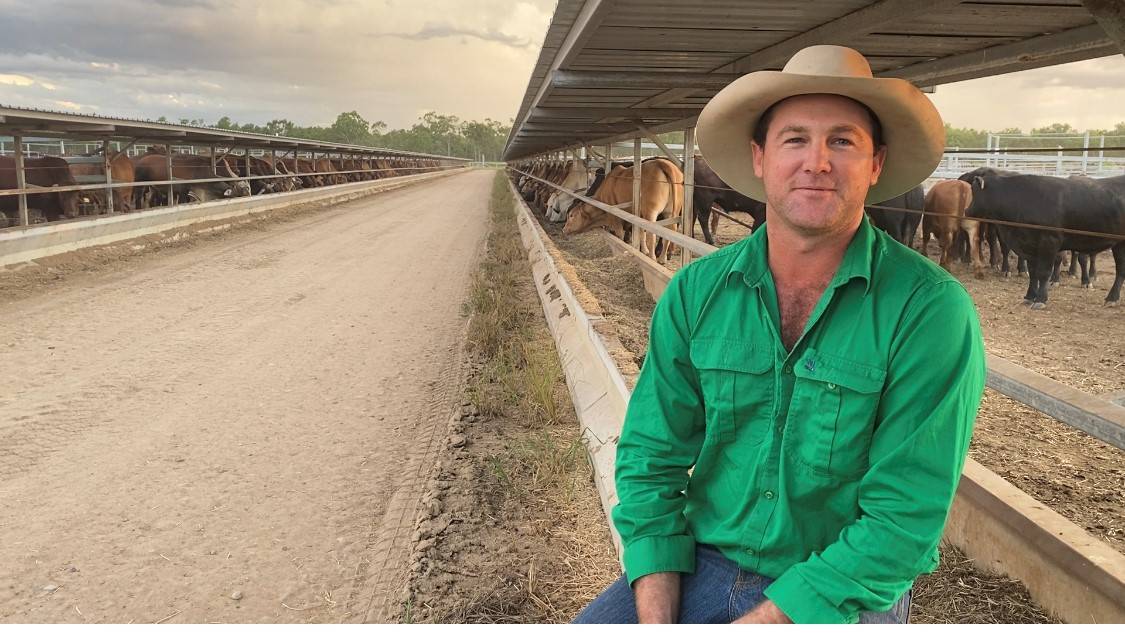 LEADING THE WAY: The 2021 Rabobank Young Ambassador Ryan Olive in the feedlot on his family property which has just started business.

NATURALLY, taking an already extensive Brahman operation to the next level via development of a feedlot and live export facility is a strategic, progressive business-minded move.

For Central Queensland's Ryan Olive, however, it was also about people, and a deep-seated faith in the future of Australia's cattle industry.

The ability to tap into a diversity of markets would be critical to fully capitalise on the growing global demand for high-quality Australia beef, Mr Ryan believes.

So the investment which he has overseen at his family's 10,000 hectare holdings, Raglan, south of Rockhampton, was designed to give market flexibility to not only to that operation but create additional markets for beef producers throughout the region.

Mr Olive collected the Rabobank Young Beef Ambassador Award, presented to someone aged 21 to 35 who shows potential to be a significant leader and contributor to the beef industry, at this year's Beef Australia.

He is fast becoming a strong industry leader, as treasurer of the Young Livestock Exporters Network and as an executive of the Queensland Livestock Exporters Association, along with his selection to participate in the 2021 Graeme Acton Beef Connections mentor program.

That work will be further boosted by receiving the a scholarship as part of the young ambassadorship to attend this year's Rabobank Executive Development Program - designed to develop the strategic planning mindset and commercial management skills of progressive farmers.

It's a program that received a lot of praise at Beef this year, including publicly from one of the industry's most respected, Palgrove's Prue Bondfield.

Mr Ryan said he was thrilled to take on the three-year role, and excited about what the beef industry holds for young people.

"In the past few years as we've expanded, and taken a shift in direction down the path of a live-ex registered premises, I've had nothing but encouragement," he said.

"It's the people in beef that make it such a good industry to work in. Everyone has a cool story and so much passion.

"It's also how valued this industry is to the rest of the county that makes it unique."

Mr Olive, a fourth generation beef breeder, is the operations manager of the Raglan cattle-handling facility and feedlot.

His parents, Andrew and Roxanne, have bred grey Brahmans for more than three decades as part of their stud and commercial cattle operation.

Mr Olive oversaw the building of the state-of-the-art cattle-handling facility, which has been servicing live-export trade from Port Alma, south of Rockhampton, since 2018.

"The cattle come in and get weighed, and from there they are put into lines according to the buyers specifications," Mr Olive said.

Mr Olive is optimistic about the future of the live export sector, saying the demand for Australian cattle is only going to grow.

"Like every trade, it faces challenges, but it is definitely a viable business that can only continue on strongly into the future," he said.

The cattle-handling facility, he said, had opened up another market for producers in Central Queensland.

"The opportunity was identified with the large volume of good quality heavy cattle in the area and the Chinese market predominantly chasing premium cuts and cattle that may have done 100 days on grain," Mr Olive said.

"There are a lot of people that deliver half or deck lots to Raglan that would otherwise not be viable to truck to Townsville in small numbers," Mr Olive explained.

Meanwhile, the 1000-head feedlot has just started business. It's ideally placed, with three processing facilities, and prominent saleyards, nearby.

Mr Olive said future growth of grain-fed beef in Australia had been touted by many and it was a natural progression that lot feeding would expand.

"Anything to do with protein is going to be in demand in years to come with a growing population, and the longer Australia can maintain a very good health status, we are in a box seat in terms of supplying that protein around the world," he said.

Presenting the award, Rabobank Australia chief executive officer Peter Knoblanche said to get both developments off the ground since returning to the family business 15 years ago showed how proactive and effective Mr Olive was as a leader.

"With his track-record to date, it will be exciting to see where he is in another 15 years," Mr Knoblanche said.