STRONG RELATIONS: Times are challenging for the Indonesia-Australia bilateral trade in cattle and beef, according to a leading industry report, but there is strength in the business. IMAGE: MLA

PANDEMIC impacts are likely to be more acutely felt this year than last in the trade of live cattle to Indonesia but there are opportunities to ease some pain and positive signs for long-term strength.

In fact, recovery might take its lead from shifts in consumer behaviour as affluent Indonesian consumers seek to add more high-quality beef to their diets.

Growth in all market segments in Indonesia, including wet markets, is expected to be robust in coming years.

These are the key messages in a major report from the Indonesia Australian Red Meat and Cattle Partnership, just released.

The Joint State of the Industry Report lists positive drivers as more streamlined Indonesian regulatory requirements, an increase in supermarket and online sales and the accelerated uptake in production efficiencies and supply chain innovation.

Negative drivers include potentially higher regulatory costs at the Australian end, reduced consumer spending power in Indonesia, lower demand for food service in restaurants and hotels, and increased supply competition from countries such as India, Mexico, and Brazil.

Speaking on a webinar to launch the report, the Partnership's co-chair Chris Tinning said the pandemic had created unprecedented uncertainty in the red meat and cattle industry in both Indonesia and Australia.

He outlined the tight Australian cattle supply that has led to a skyrocketing market, saying the herd finished 2020 at its lowest level in more than two decades and the increasing competition as it rebuilds is now being felt stronger than ever.

Combined with a strong Australian dollar, that situation has driven the export feeder cattle price to an historic high.

To counter those prices, Indonesian feedlots and abattoirs have dramatically reduced throughput, driving a 31 per cent reduction in the importation of Australian live cattle in 2020.

The report says the Indonesian industry is now advocating for access to lower-priced feeder cattle from Mexico and Brazil, although addressing import and quarantine protocols has proved challenging.

It forecasts efforts to import live cattle from other countries, and frozen meat from India and South America, will intensify this year. In fact Gapuspindo, the Indoensian Beef Cattle Business Association, aspires to import up to 300,000 head of cattle from Mexico this year. And Brazil has offered capped feeder cattle prices from areas free of foot and mouth disease.

Australian boxed meat products will also face increasing competition from other suppliers, according to the report.

Indonesian domestic beef production meets around 48 per cent of the country's demand, with the remainder met by imports of live cattle and boxed beef. 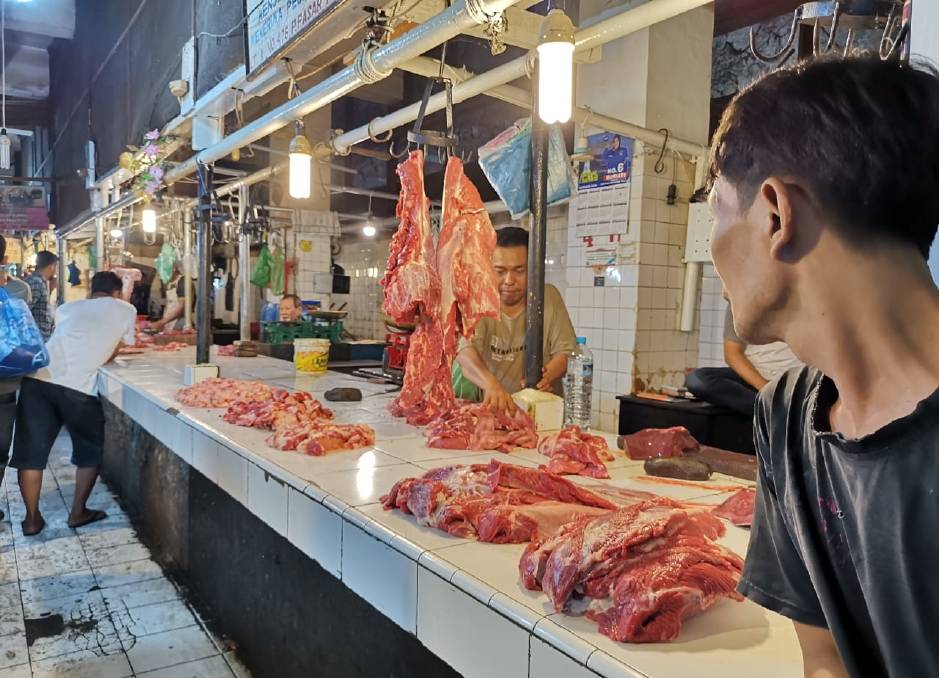 VALUED: The strong cultural and economic importance of traditional markets in Indonesia is noted in a recent industry report. IMAGE: MLA

As of March this year, the feedlot sector had halved its capacity to 130,000 head. Abattoirs also reported a drop in throughput last year of up to 30pc, the report said.

To bridge the supply gap, productive female cattle have been sold for slaughter, which the report highlights is a concern for Indonesia's longer term aims of increased beef production.

The Government has responded by increasing the provision to import Indian buffalo meat and Brazilian beef.

Not just about trade

There are already things in place aimed at reducing the price pressure as Australian cattle come into Indonesia, agriculture counsellor at the Australian Embassy in Jakarta George Hughes told the webinar.

"More broadly, this relationship is not just about trade," Mr Hughes said.

"We have a longstanding commitment to work with the Indonesian Government to boost their own red meat sector.

"Australia meets a gap in the need, one that will increase as the Indonesian population grows and people become more affluent and want to consume more beef in their diet."

Mr Hughes outlined projects to upskill people throughout the supply chain in Indonesia and the establishment of commercially-viable production models.

A dedicated program had been set up to combine Australian cattle know-how with the Indonesian environment - a practical contribution to Indonesia's efforts to grow its own production, he said.

Pandemic-related health concerns and social distancing regulations has driven a clear change by middle and high-income Indonesian consumers away from wet market meat purchases to supermarkets. There was also a 30pc spike in online meat sales.

These emerging trends may present opportunities, although the report also notes the strong cultural and economic importance of traditional markets in Indonesia.

Chair of LiveCorp and chief executive officer of Consolidated Pastoral Company Troy Setter urged working hand-in-hand to iron out supply chain inefficiencies and to promote beef's qualities to the consumer.

He believes these are the pathways to addressing the current challenges.

Not only was the cattle price from Australia very expensive but feed prices in Indonesia were increasing significantly and labour costs in both countries were going up. That was happening around the world with feedlotting, he said.

"We need to get as much carcase weight as we can from every animal," Mr Setter told the webinar.

"Historically, in Indonesian feedlots we have not had animals as large as possible. We've killed at lighter carcase weights and there is opportunity to increase that.

"Australia is not going to be able to supply all of Indonesia's beef demand. There will be meat come in from other countries. But the beauty of this trade is the jobs it creates in both countries. We need to remember that and value it."

The feedlots CPC was involved with, for example, provided a livelihood for 12000 families.

Mr Setter said Indonesia had put in the hard miles on cutting inefficiencies but there was opportunity now for Australia to do more with regulatory reform.

"It's also important we work together to promote the benefits of fresh, healthy red meat, whether it's from Indonesian or Australian cattle," he said.