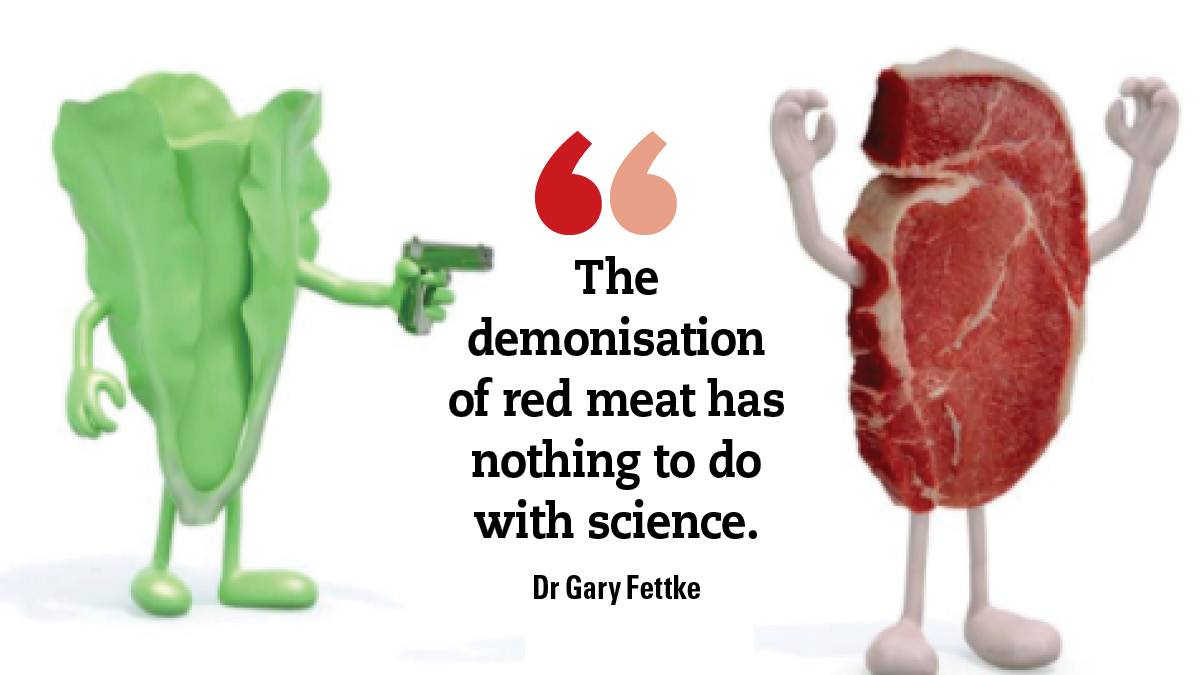 Why beef needs to know the history of veganism: surgeon Gary Fettke at Beef Australia

AMID the plethora of technical seminars and market analysis at Beef Australia this year, it seems a presentation from a Tasmanian orthopedic surgeon with no commercial ties to the red meat game has become the most talked about event.

Dr Gary Fettke's address at a forum hosted by Agforce touched on everything from religion to diabetes and the breakfast cereal business to the origins of veganism but the overarching message was clear.

The beef industry needs to know where the anti-meat rhetoric started and plan a defence because it is under attack.

ALSO SEE:Red meat hits back at banks bowing to activists

The demonisation of red meat has nothing to do with science, Dr Fettke said.

It's about religious ideology and processed food industry profit.

Plant-based foods, sugar and grains are energy-dense and nutrient-poor but have a longer shelf life and higher profit margins.

"The history of veganism, particularly in Australia, is fascinating. It's affecting the cattle industry right now," Dr Fettke said.

"Vegans and vegetarians are the gullible foot soldiers for the processed food industry and religious ideology."

How this surgeon came to be speaking at Beef Australia is a fascinating story in itself.

When he started seeing more and more complications from lifestyle diseases and diabetes, and needed to do 'too many avoidable partial and complete amputations', Dr Fettke says he came to realise the central role that sugar and refined carbohydrates in combination with inflammatory seed oils were having on metabolic health.

He started lecturing and speaking about it on social media.

"The soft drink industry was the first to notice me and then I became the target of the breakfast cereal business," he said.

These sectors reported him to the medical board, who initially ordered him to stop recommending patients cut these foods from their diets, but on appeal he was cleared.

The experience prompted him, with wife Belinda, to look into the vested interests trying to silence him.

That led to what Dr Fettke calls the 'unearthing of the nonsense around red meat.'

There was no question vegan propaganda was holding the meat industry to ransom, he said.

The rhetoric was full of misinformation, he said, using as an example the claim 51 per cent of greenhouse gas emissions were from ruminant livestock production.

"The claim 2500 litres of water are required to make a beef burger is also a gross misrepresentation of the green water that rains upon the ground," he said. 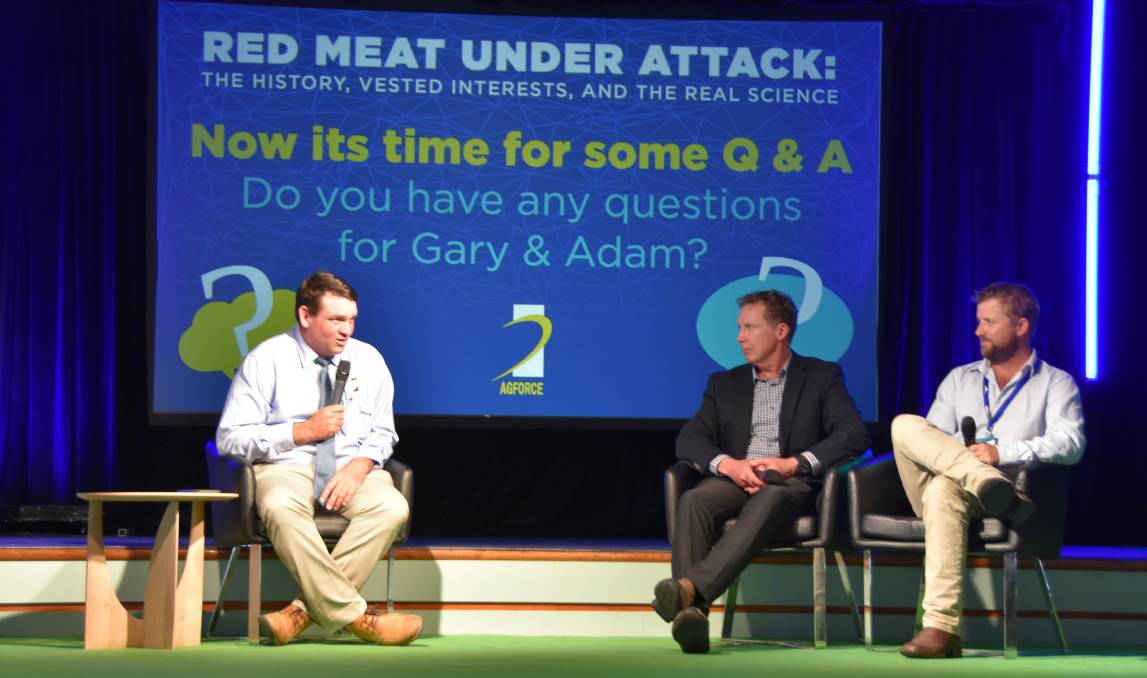 Science of the matter

"History has us at our healthiest from a metabolic aspect when our diets were predominantly animal based," Dr Fettke said.

"Generally, plant-based diets require supplementation for at least vitamin B12 and iron.

"It's almost not fair to compare beef and rice. To get the protein in 200 grams of beef you need to eat nearly a kilogram of rice, and still you would be missing the micronutrients."

Plant-based diets are generally carbohydrate dense. With the deficiency issues of protein, fats, and micronutrients, an excess intake generally follows, he explained.

If you don't take in the nutrients, you are prone to eating more and more carbohydrates to get the protein and micronutrients. That carbohydrate load over time has health consequences for many.

Yet one would almost need a search and rescue party to find meat in modern-day dietary guidelines, according to Dr Fetke.

How did we get to this grain, cereal and plant-based advice that is so anti-meat and dairy?

The food pyramid that many of us grew up with was launched in the early 1990s. Meat and dairy was in the 'have less' area.

"All sorts of protein alternatives that I never heard of as a child have found their way in," Dr Fettke said.

"Canned and processed product is now called healthy. And the cereal and grain section is massive."

The origins of the current vegetarian mantra has its beginning in a place called Battle Creek in the US state of Michigan.

Here, one Lenna Cooper instigated the American Dietetic Association in 1917. Other English speaking countries followed, with Australia and South Africa being late adopters.

"Lenna Cooper worked with, and was a protégé of, Dr John Harvey Kellogg," Dr Fettke said.

"She wrote textbooks that were used for dietetic and nursing programs around the world for 30 years. She was the voice of dietetics for decades.

"She was educated by the cereal founders and was a vegetarian.

"She practiced the teachings and ideology of the Seventh Day Adventist Church."

Dr Fettke's research shows that in the very early 1900s there were around 100 cereal companies that were mostly started by members of the Seventh Day Adventist Church.

"The best known company is Kellogg's and is ranked as one of the wealthiest food producers in the world," he said.

Australasia's Sanitarium Health and Wellbeing is fully owned by the same church.

The church was borne out of the Millerites and Temperance Movement and has grown to be a very influential group in the world when it comes to nutrition education and policy.

They initiated not only the cereal industry, but also soy and now fake meat industries, according to Dr Fettke.

One of their founding leaders was Ellen G White.

"Her values and those of the Seventh Day Adventist Church are not unreasonable, however the nutrition values are unusual because they do not come from science," Dr Fettke said.

"Her writings describe that eating meat causes violence. The term 'meat gives you cancer' stems from her visions. She advocated 'grains, fruits, nuts, and vegetables constitute the diet chosen for us by our creator."

The Adventist Health Studies are quoted regularly by vegetarian groups on the benefits of veganism but Dr Fettke says the studies are done by themselves, on themselves and cross reference each other.

They are often published by church press.

"I have never seen a personal conflict of interest, a declaration of vegetarianism or religion in any of them," he said.

Sanitarium owns the Alternative Meat Company, which partners with the Alternative Dairy Company, and is key source of propaganda that is directly harming animal-based food industries, according to Dr Fettke.