Paul Cocksedge says his Aussie Reds cows have more than held their own against their Holstein herd mates. 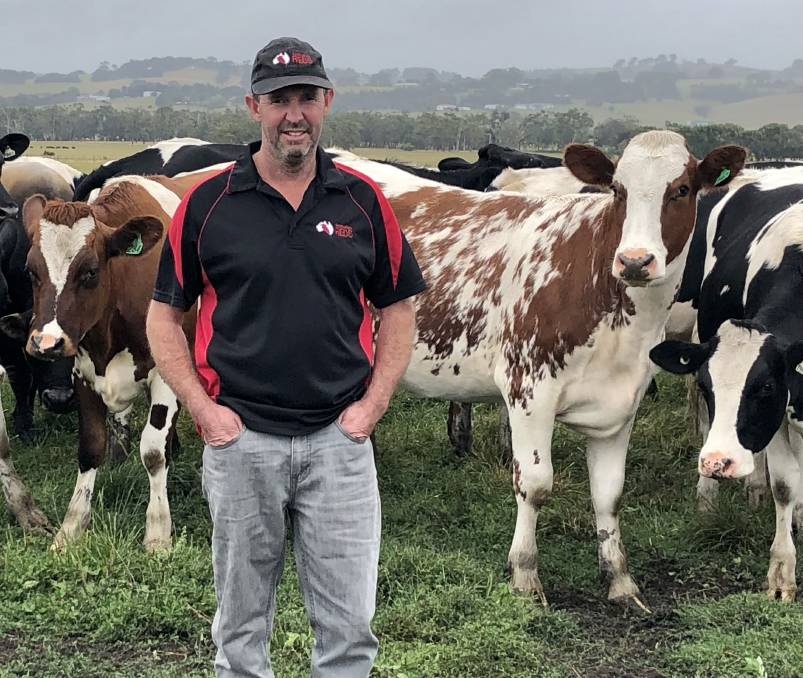 Paul Cocksedge says his Aussie Reds cows have more than held their own against their Holstein herdmates.

When Paul Cocksedge moved his herd, Paco Aussie Reds, to a new farm in May last year, he was a little nervous about how they might transition; and how they would perform when amalgamated into a herd of more than 600 much larger-framed Holsteins.

Less than 12 months after the move, he could not be happier.

"With a large number of the Holsteins producing well in excess of 50 litres per day during the spring peak, I started questioning whether my smaller Red cows could justify their place in the herd," Mr Cocksedge said.

This is where data really tells the story.

"The two biggest costs in our business are feed and fertiliser, so we need to make sure we are maximising our return on each of these costs," Mr Cocksedge said.

"Before you break it down, the gross income is higher from the Holsteins".

"With the Aussie Reds being about 50 kilograms lighter than the Holsteins, their daily maintenance requirement is 4.5 megajoules of energy less per day," he said.

"That doesn't sound much, but taken over 12 months and divided by our annual feed and fertiliser costs, the Aussie Red cows are over $40 each cheaper to run.

"This means that even though they're not producing quite as much as the rest of the herd, they are only marginally below the Holsteins in income over feed and fertiliser costs per cow but are more profitable per kilogram of liveweight.

"The seasons with higher feed costs and lower milk prices would actually put the advantage more in favour of the Reds."

A big advantage that Mr Cocksedge believes the Reds have over their herd mates is their feed efficiency throughout the season.

This is hard to measure in the paddock, but most people accept that the Reds generally hold body condition better than other breeds.

"Not many people realise it takes 30pc more energy to replace the body condition that is lost in early lactation," Mr Cocksedge said.

"And in most cases, that body condition is replaced at a time when the milk price and feed costs are higher.

"What this means is that diverting feed from production to body condition during this part of the season is a very inefficient way to produce milk."

After analysing all of the production data, it was the herd health and fertility data that really set the Reds apart.

At the January herd test, the individual cow cell counts were 25pc lower for the Aussie Reds, and since the middle of May last year, mastitis treatments for the Reds are more than 40pc lower compared with the rest of the herd.

Mr Cocksedge has been most pleased with the fertility results.

While the final in-calf rate won't be known for a few more weeks, recent pregnancy test results confirm that 87pc of the Aussie Red sired cows are in calf to artificial insemination (some to sexed semen), which is more than 14pc higher than the rest of the herd.

The icing on the cake have been the comments from Marie Lomagno, the farm's calf rearer.

She loves the Aussie Red calves and says they are so easy to rear, she would like to have more of them.

With last season's surplus male Aussie Red calves being sold to a couple of local beef farmers, their first experience rearing Aussie Reds has been a positive one.

"This year's male calves have been sold before they're even born, which will add even more value to the business, as well as addressing the issues surrounding the bobby calf industry that we need to consider for the future," Mr Cocksedge said.