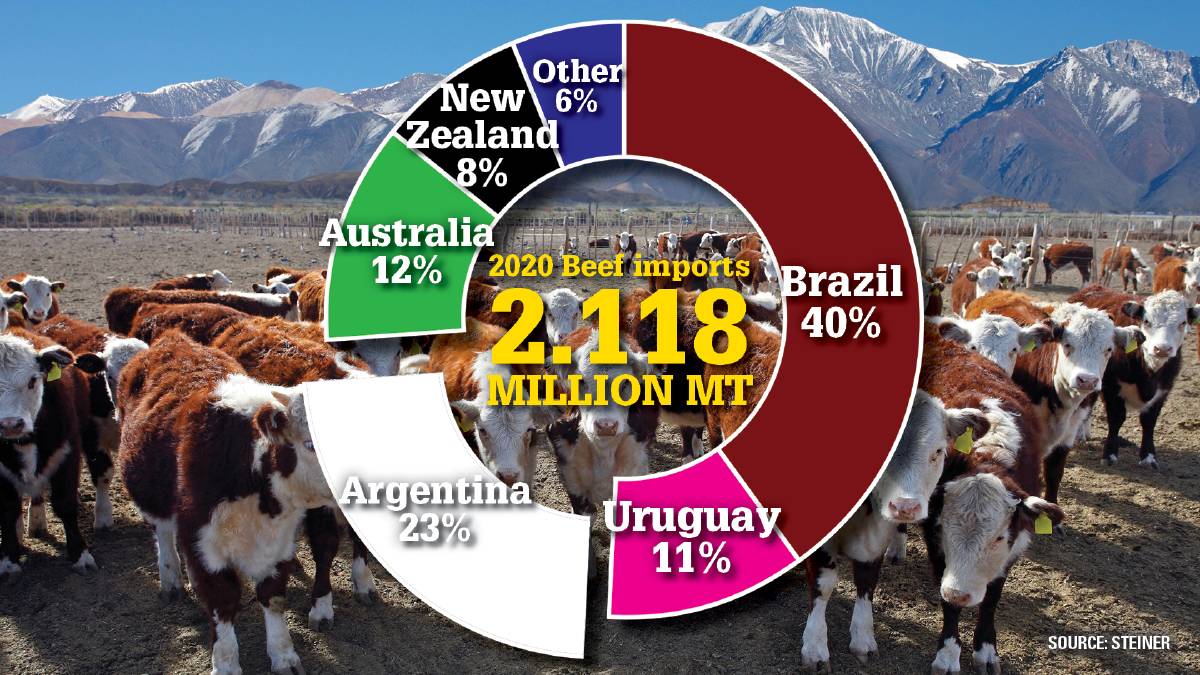 CHANGING DYNAMICS: Argentina's exit from the pie of country's supplying beef to China will leave a big gap.

A global lean meat shortage the likes of which the world has not before seen is now on the cards as China scrambles to fill the void left by one of its larger beef suppliers, Argentina.

At the same time, Indonesia's need to secure beef has intensified as the Indian buffalo pipeline is completely cut off due to the threat of coronavirus contamination.

Analysts anticipate two years of rising global meat prices on the back of this week's beef trade developments, starting with a hike of 10-12 per cent within two months.

"Brazilian exporters with meat in their back pocket have gone in asking very high numbers, feeling the Argentinian situation has given them the leverage," international meat analyst Simon Quilty, Global Agritrends, said.

Meanwhile, Australian exporters reported ramped up inquiry out of China within a day of Argentina's snap announcement of a 30-day halt in beef exports.

The Argentinian Government is trying to keep a lid on inflation and the price of meat its domestic customers are paying.

Observers believe because there is a mid-term election in November, the block on beef export from the South American cattle giant will last, in some form, until at least then.

Meat & Livestock Australia's general manager of international markets Andrew Cox said governments putting controls on exports was an interesting development, but Argentina had done it before.

"Argentina one is of the few countries where people eat more beef than Australians or Americans so (beef prices) are a hot political topic," he said.

In March, they accounted for 22pc of China's beef imports.

"Their absence will have significant ramifications," Mr Quilty said.

"The Chinese will be everywhere, boots and all, looking to buy meat. It won't just be just Australia, but New Zealand, Uruguay, Brazil and the United States."

These five countries, along with Argentina, make up 95pc of China's supply and China is the world's largest beef importer.

But Brazil's kills are down as following years of herd liquidation, NZ's cow run only has a few weeks left for the season, the US is not geared to lean beef with 90pc of its production grain-fed and of course, Australia is in an extremely tight cattle supply situation.

"It's going to be a really interesting six months," Mr Quilty said.

Whether the Chinese consumer will pay the sort of prices that may now be commanded is the next question.

MLA analysts said price references for some beef cuts had risen more than 20pc since the start of the year, such as shin, shank, chuck and blade.

"Imported beef sells at a significant discount to domestic beef in China, so there are indications the ability to pay more is there, and will be for some time," Mr Quilty said.

Australian exporters who have sought out other markets to replace China in the wake of recent political tensions may well stick with their new customers.

Regardless, new doors are likely to be opened around the world for Australian beef.

"If China was to take more beef from other suppliers, that opens up opportunities in other markets for us - places like Japan and Korea," Mr Cox said.

"The Middle East and Europe also take a lot of Brazilian product."

The disconnect between global prices and the value of Australian cattle has long been credited with keeping a lid on the young cattle market. Should processors have the ability to pay more for finished cattle, that dynamic shifts.

On the back of this week's developments, Global Agritrends has shifted its original forecast of a correction in the cattle market later this year of 15 to 17pc to just 5 to 7pc.

"Further, corrections next year won't be as severe either as it becomes easier for processors to make money," Mr Quilty said.

The strong outlook for global beef consumption for the rest of this decade was underpinning the potential for higher export prices even before the supply shocks.

OECD estimates have beef consumption rising by almost 7pc to 2029. Brazil and the US should account for almost a fifth of the global increase in demand.

ANZ makes the point that of the next seven markets forecast to see major increases in beef consumption, few are on the radar of Australia's major exporters.

Pakistan, South Africa, Turkey, Indonesia, Egypt, India and Vietnam are forecast to account for around 33pc of the world's increased beef consumption by 2029.

ANZ's Head of Food, Beverage and Agribusiness, Ian Hanrahan, believes Australia should be looking to enhance its push into new markets.