TWO Queenslanders and a Victorian Jersey operation are enjoying the spoils of buying Illawarras from a herd leaving a lasting legacy on Australia's dairy landscape - regardless of breed. 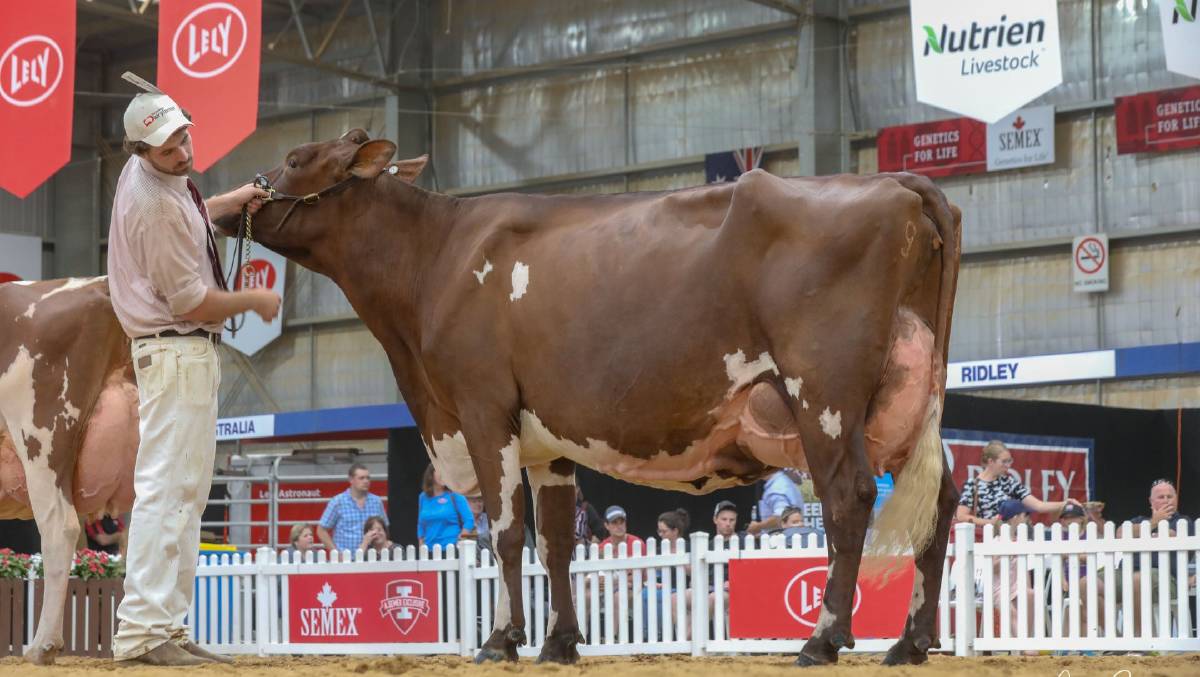 TWO Queenslanders and a Victorian Jersey operation are enjoying the spoils of buying Illawarras from a herd leaving a lasting legacy on Australia's dairy landscape - regardless of breed.

At the other end of the country south-western Victorian dairy farmers Roger and Amanda Heath milk 380-head under Wanstead Jerseys (including 70 Illawarras - Amor Illawarras), just out of Camperdown, Vic.

Notably, between these three operations there are two deep red-coloured Illawarras with the same prefix, which were recently crowned both Champion and Reserve Champion in the Australian Illawarra photographic competition.

It's a remarkable one-two finish for Ovensdale two years after its owners - Rob and Maree Newton, near Myrtleford, in Victoria - switched off their dairy for the final time.

Mr Bourke and Mr Henry have the distinction of buying the top-priced cow in both the first and the second stage at Ovensdale.

Mr Bourke and Mr Henry said they were determined to introduce Ovensdale's legacy to Queensland from the time the Newton family first announced its plans to step out of the industry.

In its first sale in 2018, they bought Ovensdale Rose 182 EX93 for the top price of $14,000. The 10,340-litre five-year-old would make its mark in Queensland, winning Reserve Senior Champion at the 2019 Brisbane Royal Show and Champion Illawarra at the Queensland Dairy Showcase at Gatton the same year. It recently classified EX94, and is housed in Myrtleholme's 600-cow 99 per cent Illawarra operation - which is averaging 30 litres a day.

In 2019, the pair made a second significant decision they could have easily missed. While they were in Victoria helping friends show at International Dairy Week, they visited Ovensdale before heading home after IDW, because neither of them could be at the sale.

The cow that excited them the most in the second group to sell was Ovensale Pearl 534 VG86, who was (at the time), "fat and dry".

"She was big and open-framed, and we rated the family as one of Ovendale's most consistent," Mr Henry said. "We didn't want to bring a cow all the way to Queensland if she wasn't special."

They again paid the top price - this time it cost them $5200 - for the five-year-old, which had produced 424kg fat on its last lactation at Ovensdale.

Pearl moved to White Park Illawarras where it calved down with a Silverleigh Maxima bull calf. That year it adapted quickly to its new environment, winning Supreme Champion at the Queensland Dairy Showcase at Gatton in July.

Mr Bourke then suggested preparing Pearl to show at IDW six months later in January on the same lactation. It involved an 18-hour drive back across three states to the cow's home state of Victoria, milking 11 months. It would be the first time Mr Bourke and Mr Henry had showed at IDW in their own right.

Pearl won Grand Champion Illawarra against the best cows in the country after making the longest journey of any cow to be there at possibly the toughest stage of lactation to travel in the heat.

The IDW judge Greg English, who had judged Pearl six months earlier at Gatton, said he couldn't believe how the cow had adjusted after its move from Victoria to Queensland, calving, being shown locally, and then being trucked back to Victoria to show again.

"I actually thought she looked better at IDW than she had at Gatton," Mr English said. "She looked incredible, and her results show just how adaptable this breed is. They can't achieve any of this if they have trouble calving, if they get sick afterwards, or if they are hard to work with."

Legacy for the industry

With Pearl's IDW win, came an increased focus on its Silverleigh Maxima son. Mr Bourke and Mr Henry have since decided to collect and market its son independently. Mr Henry is active in the AI reseller business, and he can collect and distribute Max Performance himself.

Thanks to COVID-19 its dam remains the reigning IDW Grand Champion Illawarra, and is also the champion of the 2021 Australian Illawarra Photographic Competition. It boasts exceptional components, an Australian Selection Index of +149, and is backed by one of the oldest and strongest maternal lines in the breed at Ovensdale.

For Jersey breeders Roger and Amanda the cow that moved them to buy at Ovensdale was Ovensdale Scarlett 356. They paid $5400 for it in 2018.

It has gone on to finish third five-year-old and second six-year-old (to the Reserve Champion) at IDW in 2019 and 2020 respectively. It was also Supreme Champion Cow at the 2019 Camperdown Show and Reserve Supreme at the Geelong Royal the same year. It is the Reserve Champion in this year's Australian Illawarra photographic competition to its former herdmate, Pearl 534.

Roger Heath said Scarlett 356 was the one they wanted to buy after working through the Ovensdale herd. "We only have a handful of Illawarras and if we were going to buy, it had to be a good one," Mr Heath said. "She was the one I wanted, and she's been a wonderful addition to our herd.

"She's very aggressive, and she is always one of the first few cows to the dairy. She can be pretty stubborn if she wants to do something, but she's also the cow you can walk up to and pat in the paddock. She's given us two heifer calves, and she's back in-calf again.

"She's going to do some serious production this season, and she's been a very easy cow to work with."

Ovensdale's legacy in different herds throughout the country proves that Illawarras can excel in any operation, according to Mr Henry, who said he had always loved Illawarras for their placid temperament, solid production, easy-calving and high protein percentages.

Mr Bourke said: "We do have a few Holsteins in our herd, and the red cows do just as well - better in some areas. I think like any cows that are bred right...if you feed them, they'll milk."