Twenty minutes is all it takes for the Parkinson family to collect tissue samples from about 40 calves for genomic testing. Twenty minutes is all it takes for the Parkinson family to collect tissue samples from about 40 calves for genomic testing.

And that's calves in outdoor pens on a rainy day at Kirkstall in Western Victoria.

With a herd of up to 2500 cows - calving from February through to early August - regular sampling has become a part of the Parkinson farm routine.

On this particular day in March, Xavier and Adrian Parkinson and Phil Marney take tissue samples - or notches - from the ear of their Holstein calves.

The trio work together to ensure the calves' DNA, stored in the small tube (tissue sample unit or TSU), is labelled correctly with the calf number, the calves remain calm and the job is completed efficiently.

At sampling, these calves were two-to-three weeks old, although Xavier would have preferred to have done them earlier.

"This is a little later than I would like, we'd normally like to collect the sample as early as possible," he said.

"Ideally I'd like to do it within the first two weeks of age. That way you get the data back and know which ones are most suitable for your herd and it gives you time to organise what to do with them."

Including these calves, the Parkinsons would have sent a total of about 600 ear-notch tissue samples from calves born in the past two months.

Genomic testing is a new tool for the Parkinson family.

Xavier, his brothers James, Vin, Adrian and Daniel and parents David and Shirley have invested in the technology to better understand their herd's genetics, as they work to improve the quality of their stock.

Earlier in the day, Xavier, Adrian and Phil had taken samples from another 43 calves while those animals had their morning feed.

"We tipped the milk in and as soon as they were all on (the feeder) one person was taking ear notches, one person was receiving and giving the new TSU and one person was on the paint and reading the number out to the person in the ute who was recording it," Xavier said.

"They were in the ute because it was raining, and they were writing the numbers down. That was with four of us, and we had just finished when they had finished drinking the milk - and they got more milk than they'd normally get."

Xavier estimated this process took about 10-15 minutes. If he were alone, he suspected it would have required more than an hour.

"Last year we did it at disbudding; it was easy, but we are doing it this way this year to try and get the data earlier," Xavier said.

Last year was the first time the Parkinsons had taken DNA samples from their calves. During 2020 they reared 950 calves and sold about 250 that were surplus to their replacement needs.

Due to timing of the genomic sampling and results last year, the DNA information wasn't used to help them decide which heifers would be sold.

But this year will be different. Xavier anticipates combining the heifer's genomic data with a visual assessment to make a more informed choice about which animals to retain and sell.

It's only early days for genomic technology at the Parkinson dairy farm but Xavier wants the data to assist with herd breeding decisions once they have genotyped more animals.

One example, he suggested, included using the data to target the use of sexed dairy and beef semen. 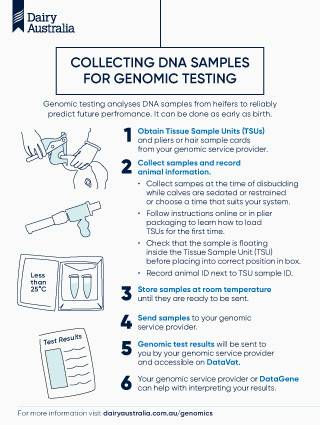 Getting the right records

Once a DNA sample is taken, and the calves' herd identification is recorded, the paperwork must be completed to receive accurate genomic results.

The TSU must be sent with a record of the calves' number, date of birth and sire.

After learning more about the family's computer herd-recording system, Xavier said matching the data with the tissue sample had become easier.

"Once you do all this stuff once, it is like routine," Xavier said. "You have your dinner and then it would be like a 10-minute job on the computer."

He also thanked Zoetis Genetics senior sales representative for south-west Victoria Bruce Officer for his assistance with the genomic-testing process.

If it wasn't for Bruce's "support", which also included a demonstration of genomic testing, Xavier said his family wouldn't be taking samples.

Weighing up the cost:benefit of genomics was something the Parkinsons debated, long before choosing to include the technology in their business.

The confidence to pursue genomics came after a presentation from Zoetis Genetics genetic manager Daniel Abernethy and the family's desire to remain abreast of industry developments.

"There's been an enormous amount of money invested in mapping the genome through Dairy Australia and all that work in genetics, hopefully it's a big success," Xavier said. "This is how the industry will get its return on all of that R&D, by people applying that science and getting the data and hopefully getting a more productive, healthier and lower maintenance herd."