NO SMILES: Red Meat Advisory Council chair John McKillop might have been smiling for this portrait but he shot off an angry letter to the government today over a perceived attack on farmers.

Australian farm groups say they are outraged anti-meat "activists" have been invited to a key seminar on food regulations.

Australian farm groups say they are outraged anti-meat "activists" have been invited to a key briefing on food regulations.

The Red Meat Advisory Council has today called on the Federal government to investigate the invitation of the group Food Frontier to a Food Standards Australia New Zealand webinar which was originally planned for June 1.

That webinar was unexpectedly postponed late today "due to unforeseen circumstances".

FSANZ regulates food labelling and is in the spotlight over claims plant-based products should be outlawed from claiming their products are "meat".

The council today asked Senator Richard Colbeck, the Minister with oversight of FSANZ to intervene, claiming Food Frontier was an anti-meat and anti-farmer activist group.

Food Frontier bills itself as a Melbourne-based think tank which "advances the local alternative protein sector" and actively promotes plant-based and cell-based meat.

The group's founder Thomas King had been invited to speak at webinar on "Future Foods, Innovation, Challenges and Opportunities" on Tuesday. 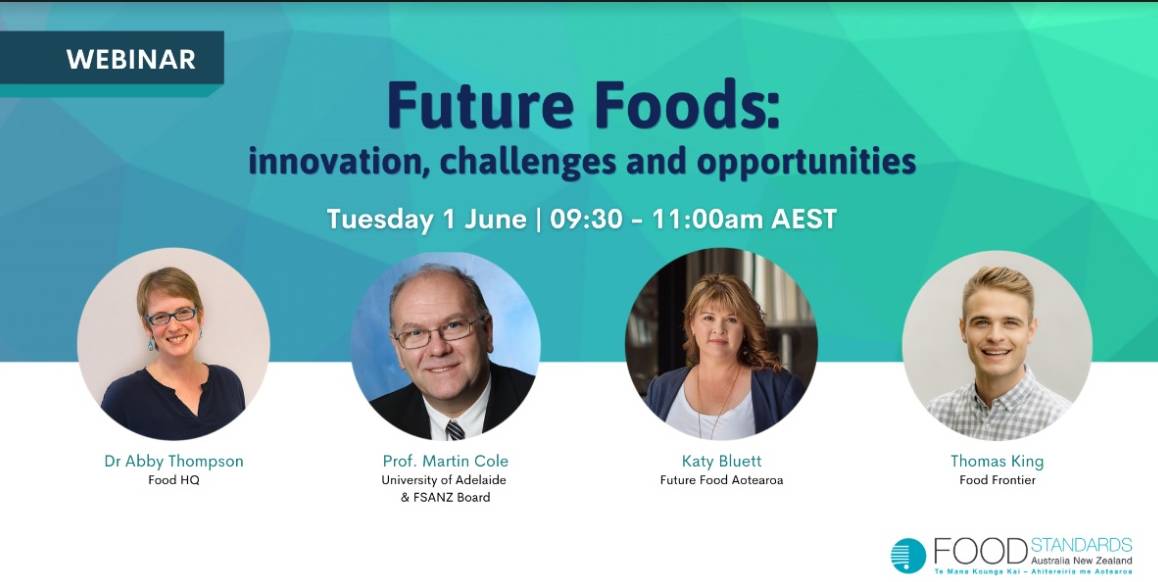 The FSANZ invitation to attend the webinar on Tuesday.

In its advice to Senator Colbeck, the advisory council's chair John McKillop said the invitation to Food Frontier "significantly jeopardises the credibility and independence of the agency".

"The use of agency resources to provide a platform to an extreme anti-livestock production special interest group is far beyond the remit of the statutory authority which was established to assure food safety," Mr McKillop said.

Livestock groups have been pushing for years to have FSANZ change labelling laws to stop plant-based products piggybacking on the name meat to sell their products.

"These spurious claims deliberately fail to recognise the Australian red meat and livestock industry's world-leading quality assurance, animal welfare and environmental standards. Australia's red meat and livestock industry has been at the forefront of national environmental and community stewardship reducing emissions by 56.7 per cent since 2005 - more than any other Australian business sector."

Mr McKillop claimed Food Frontier's Mr King was quoted in March 2019 saying "one of the first things he told fake meat makers was to avoid the term vegan on their labelling, because it can isolate consumers".

The council said it was "concerning" FSANZ was choosing to partner with Mr King, particularly when the agency is responsible for the following section of the Australian New Zealand Food Standards Code:

"meat": (a) means the whole or part of the carcass of any of the following animals, if slaughtered other than in a wild state: (i) buffalo, camel, cattle, deer, goat, hare, pig, poultry, rabbit or sheep; (ii) any other animal permitted for human consumption under a law of a State, Territory or New Zealand - Standard 2.2.1 Meat and meat products

Other appointed speakers to Tuesday's webinar include Katy Bluett who the advisory council claims also has an anti-meat agenda, and also Professor Martin Cole, the chief scientific advisor for a manufactured plant-based protein company v2food.

Mr McKillop said the reputation for his industry's safe and quality product had been supported by the standards of public health set under the FSANZ Act.

"With more than $11 billion of red meat annually retailed for domestic consumption, a high degree of confidence in Australia's food standards is critical for the ongoing viability of red meat and livestock businesses.

"We are deeply concerned that FSANZ's partnership with extreme activists may lead to reduced consumer confidence in the objectivity of the Australian New Zealand Food Standards Code."

Mr McKillop said whether it was dairy, wool or meat, Australian livestock production was at the heart of Australia's fabric.

"Every day 434,000 proud red meat and livestock workers toil to feed Australian families and many others all across the world.

"With 90 per cent of all meat and livestock industry employees living in rural and regional areas, any calls to reduce or eliminate animal agriculture is an extreme threat to the livelihoods of the nation's country communities."

Mr McKillop said "by publicly partnering with Food Frontier", FSANZ is not only failing the hundreds of thousands of Australian families whose livelihoods rely upon Australia's meat and livestock industry but also their own goals set for the agency under the FSANZ Act.

He ended his explosive letter to Senator Colbeck by asking for an investigation into how FSANZ came to partner with extreme anti-livestock activists.

He said the investigation was needed "to ensure the credibility and independence of the agency is maintained".

"The consumer confidence developed over thirty years since the FSANZ Act was established is too valuable to be risked by a misguided partnership with extreme anti-meat and anti-farmer activist organisations."