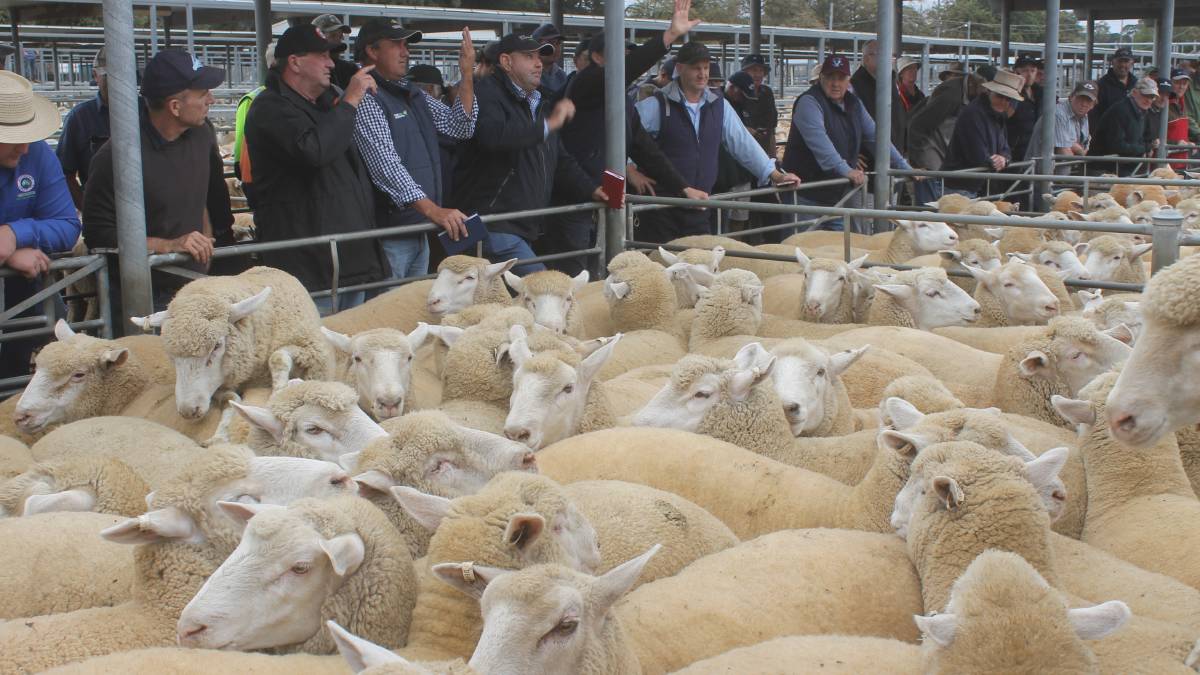 ESTLI picks up a few cents, but national indicators remain volatile across the country.

Less lambs hitting the market gave prices a nudge across the country with the Eastern States Trade Lamb Indicator (ESLTI) picking up an extra 30 cents for the week to end at 843c per kilogram carcase weight.

East coast lamb yardings dropped seven per cent compared to the week before to 162,390.

Sheep throughput was also down in the east, with six per cent fewer sheep yarded than the week prior.

But when comparing Victoria and New South Wales, looking at the five year seasonal average, NSW lamb yardings were 22pc below average, but in Victoria, they were six per cent higher.

And prices in Victoria weren't too far off what the industry was experiencing in 2020, albeit the Eastern States Trade Lamb Indicator down 70c compared to this time last year.

Bendigo livestock agent Nick Byrne of Nutrien Ag Solutions said when looking at Bendigo's combined sheep and lamb average they were within 50c of what it was at the same period last year.

"You'd have to preface that by saying lambs would be heavier this year compared to last year, because of the season that we have had, it has been very good in our area," Mr Byrne said.

"It's only been in the last six to eight weeks that we have started to struggle a little bit. There has been no big autumn break like we had last year."

He said sheep and lamb numbers are likely to "pull up" from this point going forward.

"We have a new set of lambs on the ground now so most of our old lambs and spring lambs are gone," he said.

"There are still a few finishers and feedlotters with a few numbers about, but generally speaking the bulk of the numbers have gone down."

Mr Byrne said it is hard to see significant numbers of early season suckers this year with most of the area's early suckers coming from the north of Bendigo where the rain has been notably less and even non-existent in some places.

"There will be more lambs on the ground that will take more feeding and we don't have as much feed as we had last year."

This will change the dynamic of the market considerably, he said.

"The weather will obviously play a big part in that, but on face value, there won't be many early lambs over the 30kg mark so it will be interesting to see how that side of supply/demand weighs out come early spring," Mr Byrne said.

In the meantime, in Western Australia last week, 16,443 head were yarded which was a slight lift week on week but 15pc below the seasonal average.

Heavy lambs are trading at about 76c under the same time last year.

Restocker lambs lost any gains made the week before, dropping 23c to 847c/kg cwt.

They were hardest hit in SA and NSW where the Restocker Lamb Indicators dropped a massive 110c in SA, and 80c in NSW a single week.

"All those things in our neck of the woods are pretty spot on. The negative in all of that is the lack of autumn feed as opposed to this time last year," he said.

"Last year all our dry-land farmers were lambing onto green paddocks and the lambs were away from the day they were born.

"Whereas this year there is a lot of hand feeding going on.

"Even if it does start raining now it has got cold....so there will be a continuing of hand feeding going on for a significant period.

"There will be more lambs on the ground that that will take more feeding and we don't have as much feed as we had last time."

Mr Byrne said if possible, those producers that can get their lambs up early, before September, will be handsomely rewarded.

"But nowadays with containment areas and irrigated pastures and even just farm practices where people might wean their lambs early and put them on the crop, we don't seem to get those big spikes in supply that lead to decline in prices.

"While the Australian flock is significantly lower than it has been, if the market drops seriously in one week, producers will tend to ride the storm out a bit longer.

"But we don't tend to get those sustained periods of huge yardings over a big area."